Search operations will resume on Tuesday morning to find out if anyone is still missing, said Sandesh Shirke, sub-divisional magistrate, Mulshi division 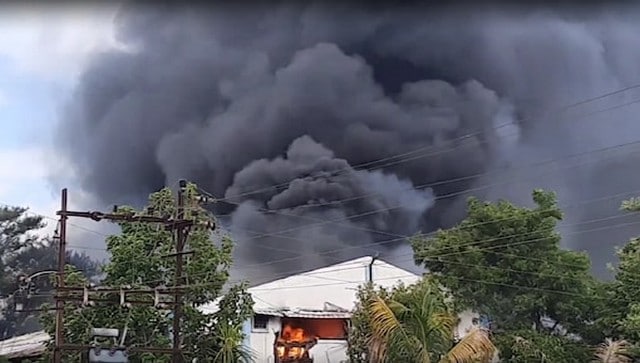 A video grab of the fire at the factory in Pune. News18

Pune: At least 18 workers, mostly women, were charred to death in a devastating fire that broke out at a chemical firm in an industrial area in Pune district on Monday afternoon, officials said. One worker suffered burn injuries in the incident, they said.

According to the officials, the fire broke out at SVSAqua Technologies, which manufactures chlorine dioxide among other chemicals and is located in the Pirangut MIDC area of Mulshi tehsil on the outskirts of Pune city. “So far, 18 bodies have been recovered from the firm’s premises. We have stopped the search operation due to darkness and heat caused due to the blaze.

“The search operation will resume on Tuesday morning to find out if any worker is still missing,” said Sandesh Shirke, sub-divisional magistrate (SDM), Mulshi division. He said as per company officials, there were around 17 employees, including 15 women, at the site where the blaze started.

All the bodies, which were completely charred, were sent to the government-run Sassoon General Hospital for autopsy, Shirke said. The bodies were burned beyond recognition and their identify will have to be ascertained by conducting DNA testing, he said.

A worker escaped with burn injuries and was admitted to the Sassoon General Hospital, where he is stated to be out of danger, Shirke said. Fire brigade officials said the bodies were found in multiple groups with the victims clinging each other in a desperate attempt to stay together and escape the inferno.

Devendra Potphode, Chief Fire Officer, PMRDA (Pune Metropolitan Region Development Authority), Fire Services, said six to seven fire tenders were rushed to the chemical unit to douse the flames. Asked about the possible cause of the blaze, Potphodesaid as per the company officials, the fire started during packing of plastic materials in the premises.

“Due to some spark at the (packaging) section, the fire broke out and as there was plastic around, it spread rapidly,” said Potphode district collector Rajesh Deshmukh, who visited the spot, said an inquiry has been initiated into the tragic incident.

“A committee, led by the SDM, Mulshi, with the chief fire officer of MIDC, PMRDA and other officials as its members, has been formed to probe the incident and they willsubmit their report,” he said.

Maharashtra deputy chief Minister Ajit Pawar, in a statement, said an inquiry has been ordered to find out the exact cause of the fire and a compensation of Rs 5 lakh each will be given to the next of the kin of the deceased.

The firm, located near Uravade village, around 40 km from the city, is into manufacturing of chemicals, including chlorine dioxide, which are used in water purification.