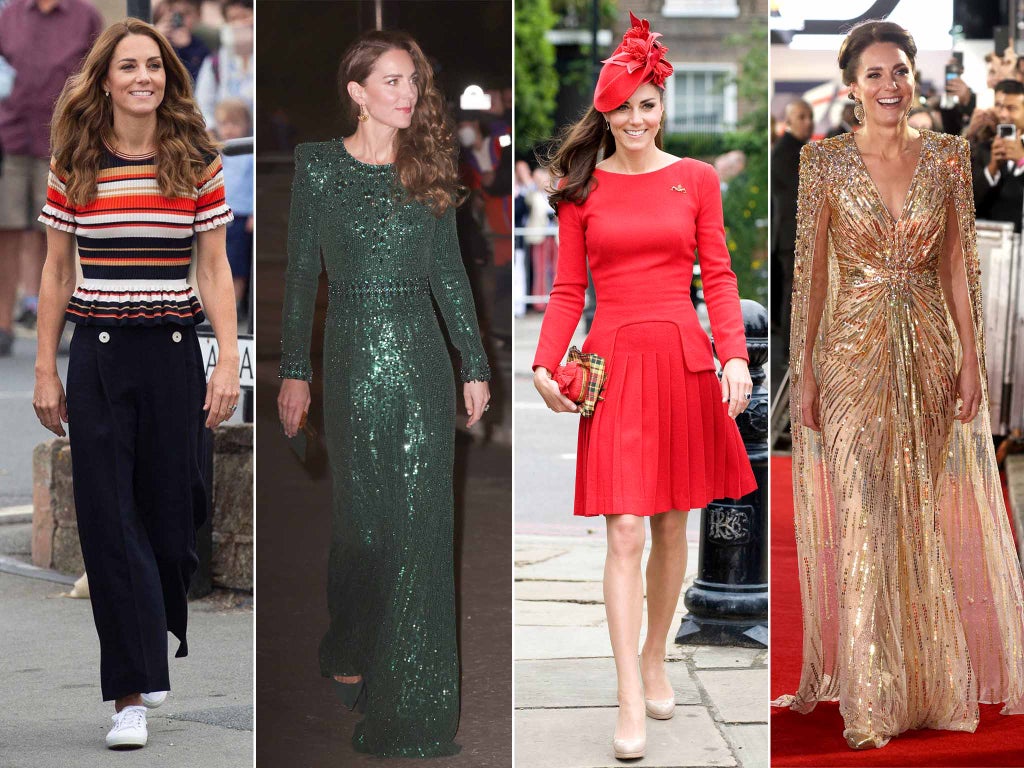 Ever since she was spotted walking arm-in-arm with Prince William during a ski trip in 2004, the Duchess of Cambridge’s style has come under close inspection.

From Kate Middleton‘s early time in the public eye, during which she embraced preppy puffer jackets and hiking boots, to more refined gowns at evening galas, the royal’s wardrobe has experienced a coming of age over the years, prompting her sartorial status to soar.

Most recently, the royal stunned fans when she arrived at the No Time To Die premiere wearing a shimmering gold Jenny Packham gown, complete with a sheer cape and structured shoulders.

Her appearance was praised on social media, with some describing it as “the best she’s ever looked”, while other said it was “the biggest wow red carpet moment” of the last two years.

Today, as she rings in her 40th year, the Duchess is recognised for her effortless polish – there isn’t a public appearance where she doesn’t look perfectly put together – with the so-called “Kate effect” causing websites to sell out of designs in minutes, months-long waiting lists and surges in sales for lesser-known brands.

While the royal regularly wears items from a number of luxury fashion designers, including Emilia Wickstead and Erdem, no brand is held in as high regard by Kate as Alexander McQueen, which she chose to create her custom wedding gown in 2011.

In the years that have followed, Kate has turned to the luxury brand on several occasions for appearances including the Queen’s birthday party, the Royal Variety Performance and Trooping the Colour.

However, the Duchess regularly ensures that such royal pageantry is balanced by wearing fashion that’s considered to be more “down-to-earth”, with budget-friendly pieces from high street favourites such as Zara, Hobbs and LK Bennett.

Aside from the royal wedding, some of Kate’s most talked-about fashion statements have been made on the steps at the Lindo Wing of St Mary’s Hospital in Paddington, following the births of each of her children, George, Charlotte and Louis.

The Duchess introduced all three newborns to the world with a bedside blowdry and perfectly put-together looks designed by Jenny Packham in variations of spring yellow, baby blue and scarlet red.

When the Duchess of Cambridge announced her engagement to Prince William back in 2010 she chose to wear a dark blue wrap dress designed by Issa. The outfit signaled the introduction of the “Kate effect” after the dress sold out in more than 43 countries.

For her wedding day on 29 April 2011, Kate Middleton chose a gown designed by Sarah Burton at Alexander McQueen which was inspired by the Victorian tradition of corsetry.

The lace appliqué on the skirt and bodice was handmade by the Royal School of needlework, while the train made for a dramatic entrance measuring at two metres long.

At her wedding reception, Kate slipped into something a bit more comfortable. Another look designed by Sarah Burton, the angora bolero was an elegant touch over a satin A-line gown with a sweetheart necklace and a jewelled belt.

In honor of the Diamond Jubilee, Kate was a lady in red in this look from Alexander McQueen’s pre-fall 2011 collection. The dress featured long sleeves and a pleated skirt, and despite its £1,195 price tag, had reportedly sold out online by the end of the day.

The birth of Prince George, July 2013

Just like Charles and Diana, the couple introduced the baby to the world outside the Lindo Wing the next day. For her first photo as a new mother, Kate wore a blue polka dot dress by Jenny Packham with a pair of nude wedges.

Kate and William’s eldest child Prince George was christened at St James’s Palace on 23 October, 2013 – three months after his birth.

The Duchess chose a creamy white custom Alexander McQueen dress for the occasion, with ruffled detailing at the front and an A-line style skirt. She teamed the ensemble with a silk organza rose and veil hat by milliner Jane Taylor.

The royal finished the look with her hair styled in an updo and diamond earrings.

The birth of Princess Charlotte, May 2015

The world gained a new Princess after the Duchess of Cambridge gave birth to her second child, Princess Charlotte Elizabeth Diana, on 2 May 2015.

For her second appearance at the Lindo Wing after giving birth, Kate chose a pastel yellow and white floral print dress by British designer Jenny Packham, who also created her first post-pregnancy dress for her appearance following Prince George’s birth two years prior.

For Princess Charlotte’s christening at the Church of St Mary Magdalene on the Sandringham Estate in 2015, Kate chose a stark white Alexander McQueen fit-and-flare dress and matching fascinator.

During their 2016 tour of India, the Duke and Duchess of Cambridge visited Kaziranga National Park in Assam, where they fed baby elephants and rhinos.

Kate wore a casual Topshop dress with floral embroidery and completed the look with Dune London espadrilles and Accessorize earrings.

The Duchess of Cambridge greeted crowds of public outside Sydney Opera House during a three-week tour of Australia and New Zealand wearing a vibrant yellow and white, color-blocked dress by Roksanda Ilincic.

The royal loved this dress so much, she wore it again in July at Wimbledon in 2018.

The Duchess wore an elegant white lace gown by Self-Portrait with a red poppy pin and a matching clutch as she walked the red carpet at the premiere of A Street Cat Named Bob in London.

The film benefitted Action on Addiction, one of the many charities Kate supports.

The Duchess wore a modest, pink dress designed by Alexander McQueen for her sister’s wedding to James Matthews at St Mark’s Church.

The pale pink silk midi dress featured bell sleeves and a cinched waist, and she accessorised it with a matching fascinator and suede heels.

Kate wore a polka dot dress by Dolce & Gabbana as she made her debut as patron of the Wimbledon tournament.

Kate chose to wear a mustard yellow and blue, floral gown designed by Erdem as she and Prince William met with Swedish prime Minister Stefan Löfven and his wife, Ulla Löfven, for a dinner at the British ambassador’s residence.

The pregnant royal, who was expecting her third child, revealed her burgeoning baby bump in the high-neck dress which cost £1,945.

A formal dinner at the Norwegian Royal Palace, February 2018

Kate made a regal statement in an Alexander McQueen draped gown for a formal dinner at the Norwegian Royal Palace.

She accessorised with a diamond bracelet that was a wedding gift from the Queen, along with Her Majesty’s pendant earrings.

The birth of Prince Louis, April 2018

Kate opted for another Jenny Packham dress, this time in red and white – a look many speculated was a tribute to Diana’s ensemble in 1984 following the birth of Prince Harry.

The Duchess wore a red Alexander McQueen off-the-shoulder gown at a garden party in Berlin in honor of the Queen’s birthday.

For the christening ceremony of her third child, Prince Louis, Kate Middleton wore an all-white Alexander McQueen dress that featured puffed sleeves, a V-neck and midi-length hem. The royal accessorised the look with an ornate Jane Taylor headband.

Some royals do wear capes. Kate Middleton opted for a baby blue cape coat by Mulberry for her second day of engagements in Northern Ireland in 2019.

The statement piece of outwear was from the English brand’s Fall 2018 collection and featured a short cape that fell down to the elbows, as well as a belt and large buttons.

The duchess made an appearance at the Anzac Day services in London wearing a teal coat dress by London-based designer Catherine Walker.

The dress was nipped at the waist and came with a pleated A-line skirt, oversized buttons and a strong shoulder line.

For the occasion, the royal turned to one of her favourite designers, Sarah Burton at Alexander McQueen, wearing a gorgeous white ruffled gown.

She also debuted her sash and star of the Dame Grand Cross of the Royal Victorian Order – an honour she was given from the Queen in April that year on the day of her and Prince William’s eighth wedding anniversary.

The dress retails at £1,850 and is made from Italian silk crepe, the designer states on the website.

In one of her most casual looks, Kate attended the King’s Cup Regatta wearing a colourful stripy top by designer brand Sandro with high-waisted navy trousers by one of her go-to high street favourites, L.K. Bennett.

The royal completed her casual but chic look with a classic pair of white trainers from Superga.

Kate dropped off Princess Charlotte to her first day of school wearing a striking red and white printed dress by Michael Kors, known as the ‘Carnation dress’. The gown was cinched at the waist with a slim black belt and paired with navy court heels.

The “Back to Nature” festival, September 2019

Kate wore this breezy Emilia Wickstead dress to the opening of the “Back to Nature” playground and garden that she helped design at the Royal Horticultural Society’s Garden Wisley in Surrey.

The royal completed the look with a trusty pair of espadrille wedges for the grassy terrain.

During a visit to Lahore’s Badshahi Mosque, Kate wore a green shalwar kameez by Maheen Khan, paired with a matching headscarf.

On Twitter, Khan said she was “proud to have designed this outfit” for the Duchess. Khan explained that she and her team adorned the chiffon look with Phulkari embroidery, which is “a craft and a pattern of geometrics [prevalent] in Chitral.”

Kate wore an Alexander McQueen gown to the Queen’s 2019 Diplomatic Corps Reception. The dress was was a long, velvet gown complete with long sleeves, a subtle concave neckline, and a slim fit.

She layered the gown with a blue sash, symbolising her Dame Grand Cross of the Royal Victorian Order honor.

Kate arrived at a screening of Disney’s Cruella at the Palace of Holyroodhouse wearing a Holland Cooper plaid trench coat.

Playing tennis with school children in Scotland, May 2021

Meeting with the military, September 2021

In September, Kate met with military personnel who helped evacuate Afghans from their home country following the Taliban’s takeover.

For the event, she wore a double-breasted, beige Reiss blazer paired with loose navy blue trousers and a beige mini bag.

No Time To Die premiere, September 2021

The Duchess turned heads as she arrived on the red carpet wearing a full-length gold gown by British designer Jenny Packham.

In a nod to one of her favourite designers, the royal re-wore an Alexander McQueen gown that she first wore a decade earlier in 2011.

Appearing on a balcony of the Foreign and Commonwealth office, Kate wore a structured black Alexandra McQueen coat paired with pearl-drop earrings.

Kate wore an old favourite; a long-sleeved, emerald green sequin Jenny Packham dress. She first wore the gown for an official tour of Pakistan with the Duke of Cambridge in October 2019.