A Minnie adventure: The joy of Disney World – a sensory overload with magical rides

Top of my holiday wishlist is another trip to Disney World, for I have discovered my happy place – and inner Minnie. Having never visited the Orlando resort as a child, I’ve always felt I’d missed out, so when I was invited to give a lecture on the Royal Family in Miami, it seemed the perfect opportunity to make a detour with my husband Chris and children Matilda, nine, and George, four.

As we pulled up at Disney Yacht and Beach Club Resort, we let out a collective gasp. The sheer size of the place is mind-boggling. ‘I can’t believe we are in Disney World!’ Matilda squealed. Neither could I.

At check-in we were given Mickey Mouse wristbands which give access to all the parks and contain passes that let us skip ride queues. 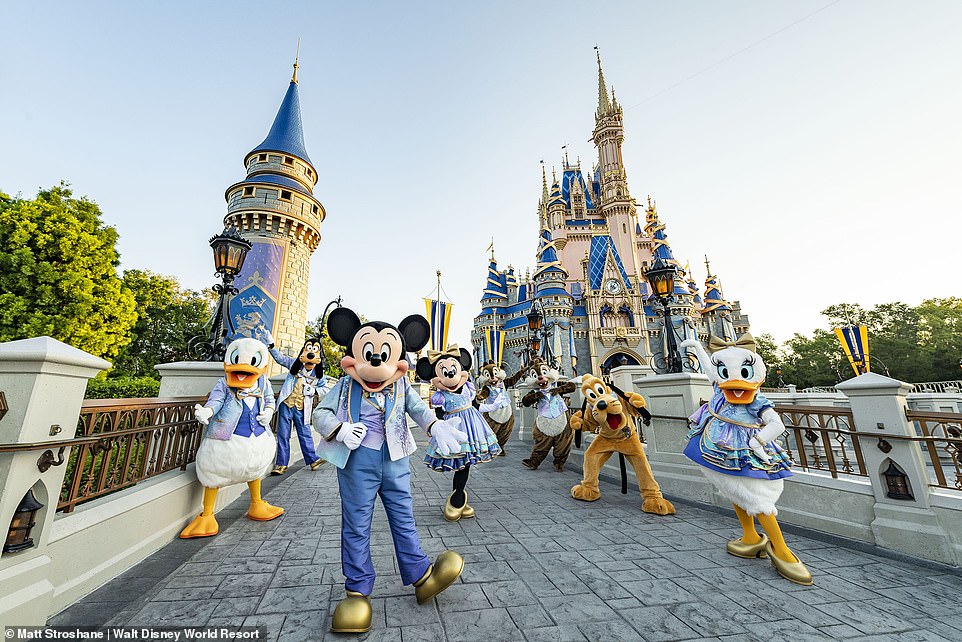 Fantasy life: You’ll find Mickey and Minnie and all their friends at Disney World’s four parks

Too excited to unpack, we grabbed a day-bag stuffed with essentials: sunscreen, plenty of water, fold-away umbrella (for standing in long queues in the heat) and the sugar-laden Mickey Mouse cupcakes left in our room.

As we headed to Epcot, complete with an Eiffel Tower and a vast lake, I marvelled at the scale of the park. Disney World isn’t just America’s top tourist destination, it’s a county in its own right, complete with a municipal district.

The sophisticated transport infrastructure makes getting around easy. The new cable-cars afford bird’s-eye views, boat rides make for a scenic experience while the monorail and Walt Disney World Bus Service whisk you quickly between the parks.

Proudly sporting our newly purchased Mickey and Minnie ears (a must!), we strolled around the World Showcase, stopping at England with a quaint pub, lipstick-red post boxes and beautifully manicured gardens where we chanced upon Mary Poppins, much to Matilda and George’s delight. 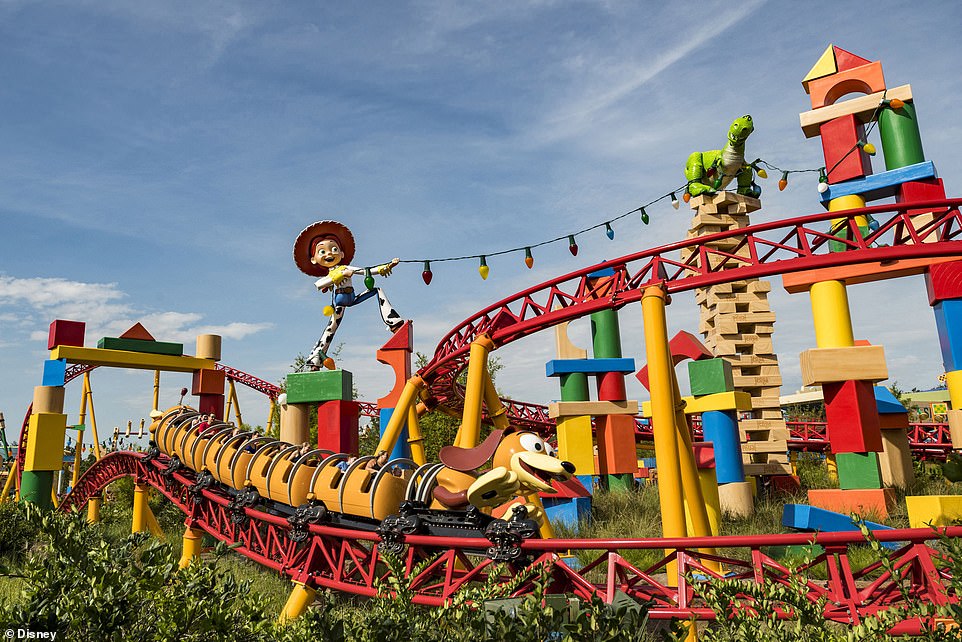 Fast track: Katie and her husband get to try out the Slinky Dog rollercoaster, pictured above 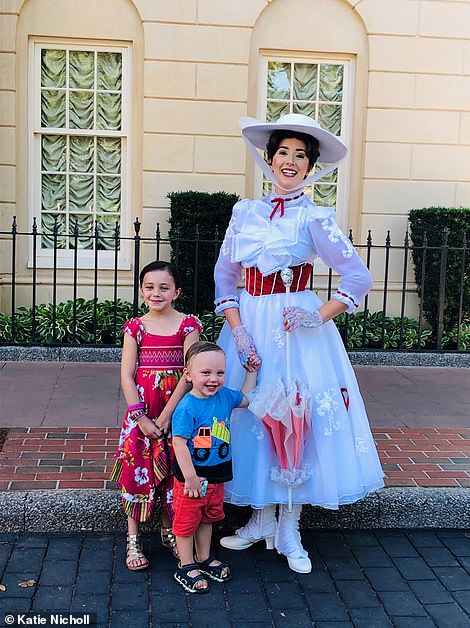 It was a hop and a skip across to Norway, where we sailed through the fantastical world of Frozen on a Viking ship. With music from the film and amazing 3D technology that makes the models marvellously realistic, I loved the ride so much that we did it three times and even got to meet Elsa and Anna.

With George being so young, we were limited at Epcot, which has some of the more exhilarating rides. However, Spaceship Earth, located in a giant golfball-like dome that lights up at night, was suitable for all ages, while a journey from the Stone Age through to the Digital Age on slightly rickety trains was educational and fun.

The kids also loved The Seas With Nemo And Friends – a ride on a ‘clamobile’ which spins and turns as the underwater world of Finding Nemo whooshes past.

My highlight was Soarin’ Around The World – a virtual-reality hang-gliding ride. Matilda, who just met the height restriction, bagged us first-row seats, which meant we had a thrilling view as we flew over an African savanna alongside a herd of elephants.

Then we towered over the Taj Mahal before heading to the North Pole, where an icy blast of air caught us by surprise and the delight of seeing a very realistic polar bear and her cub jump into the sea actually brought a tear to my eye.

Epcot stages the most incredible nightly fireworks display over the lake that is set to music and a state-of-the-art light show.

The kids were exhausted and fell asleep on the train back to the hotel, but I stayed up plotting the next day’s itinerary.

We wanted to squeeze all four parks into just three days, which is ambitious but just about possible. There is simply so much to see and do that you probably really need at least five days here, so planning is essential. And it’s worth staying at a Disney hotel, as guests can enjoy crowd-free ‘magic hours’ in the morning before the parks open to the public. 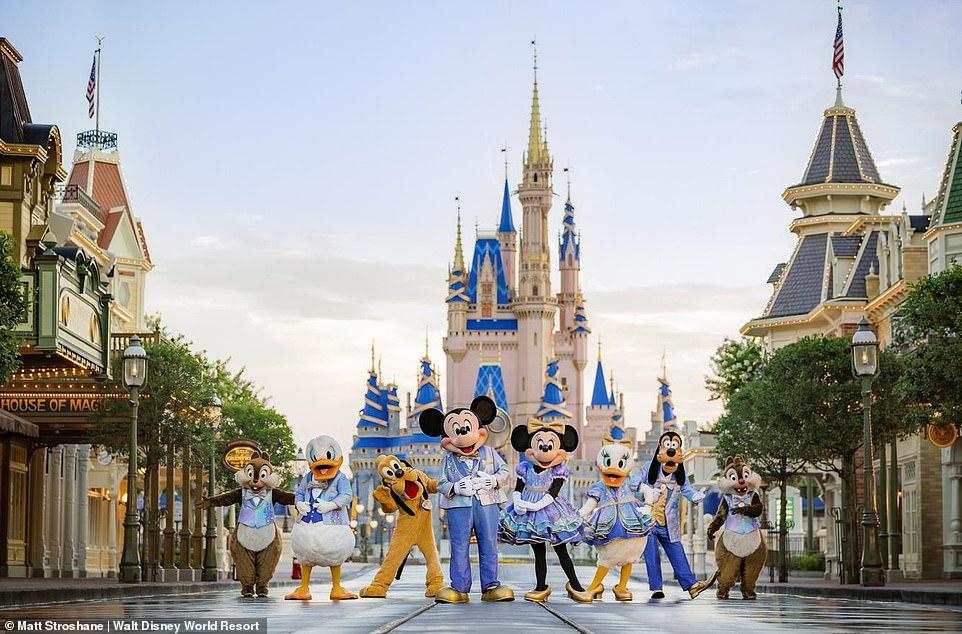 According to Katie, there’s no need to carry cash at Disney World. She says: ‘Just charge everything to your Disney account, which is linked to your Mickey Mouse wristband’

The Disney Genie Service is also a brilliant way of navigating and checking waiting times for rides. It can get you passes to bypass queues, reserve dining (essential if you want waiter service) and pre-order food to cut waiting times.

There’s no need to carry cash: just charge everything to your Disney account, which is linked to your Mickey Mouse wristband – the one piece of kit you don’t want to lose.

If you can stretch to paying for a VIP tour guide, rates range from £315 to £630 per hour, depending on the season, with a minimum booking of seven hours and a maximum of ten guests per tour. 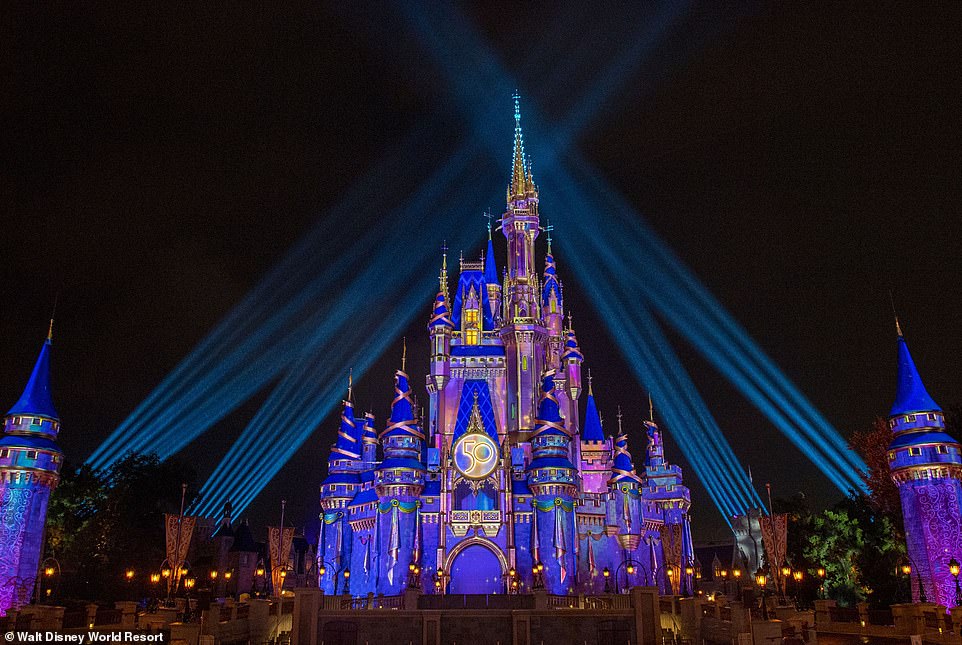 ‘We dedicated the whole of our last day to exploring the Magic Kingdom and its four lands: Frontierland, Fantasyland, Tomorrowland and Adventureland,’ says Katie. Pictured is the resort’s Cinderella castle, which is the gateway to Fantasyland

You enjoy the luxury of being chauffeured around the parks in SUVs, and from snacks on arrival to wet wipes for sticky hands, the service is five-star.

Our charming guide Mark knew every nook and cranny, and his shortcuts as we tackled Hollywood Studios and Animal Kingdom on day two meant we got around at lightning speed. He also had a pass that meant we never had to queue more than ten minutes for even the most popular rides.

The children were too small for some of them, but Mark was happy to keep them entertained so my husband and I could experience the Tower Of Terror (a sheer drop in the dark – never again) and the Slinky Dog rollercoaster. 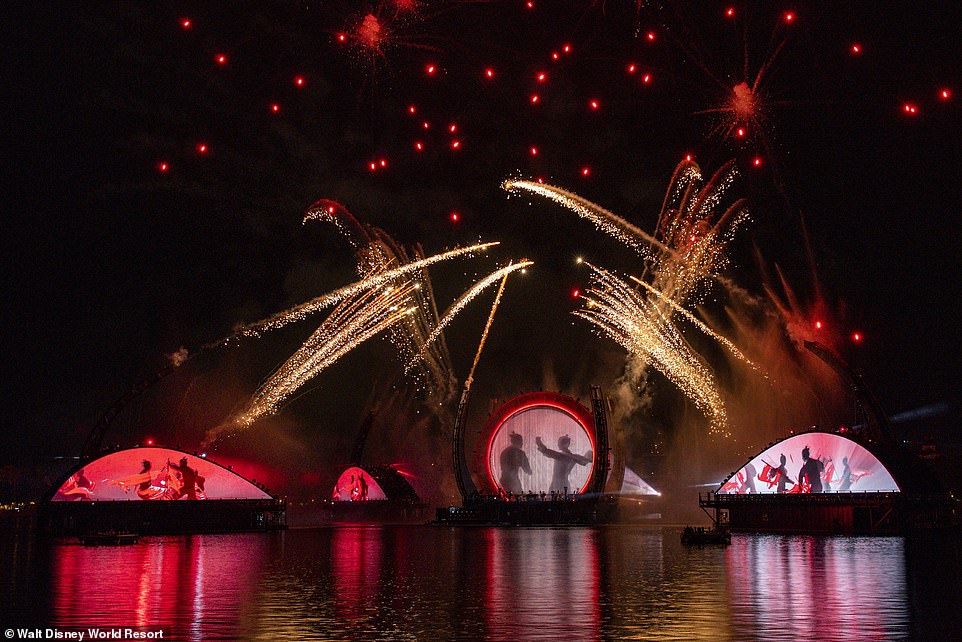 The shows at Hollywood Studios are brilliantly produced – we enjoyed Beauty And The Beast and the Little Mermaid – and they provide some much needed time out from the sun and crowds.

We then headed to Animal Kingdom, home to ‘Africa’ and ‘Asia’ and the incredible World Of Avatar, which includes a spectacular ride down the film’s Na’vi river. The children loved riding in a jeep around the park, where we got to see hippos, lions, crocodiles and giraffes.

We dedicated the whole of our last day to exploring the Magic Kingdom and its four lands: Frontierland, Fantasyland, Tomorrowland and Adventureland.

Matilda was desperate to visit the castle so we made a reservation for lunch with Cinderella and the other Disney princesses.

Watching the children’s faces as they met the stars of movies they love was wonderful, and when I discovered Disney champagne I was in second heaven!

The whole experience was a sensory overload with parades, music, fireworks like I’ve never seen and magical rides.

After a pretty tough year and a half, what I loved most about Disney was the escapism. I forgot about the real world and simply revelled in being a kid all over again.

Read More »
PrevPreviousThis £16 Asda dress is so popular it even has its own Instagram page
NextEuronews Debates | Profit vs public good: How can innovation benefit everyone?Next