I’m quite sure there are few people in the world who appreciate German Christmas markets more than my mother, Deb Hucal, who was born and raised in Michigan. So when she suggested coming to visit me in Germany for a three-night river boat cruise down the Rhine, I thought it sounded like a relatively laid-back way to spend mother-daughter time around the holidays.

Billed as an “Advent cruise,” our 98-cabin vessel stopped at towns along the Rhine: Cologne, Rüdesheim and Koblenz. Joining us was my mother’s longtime friend, Judy Reed. Originally from Germany, she moved to the US 46 years ago and lives in Arizona. The pair met in their early 20s when they both worked at a travel agency in Michigan. 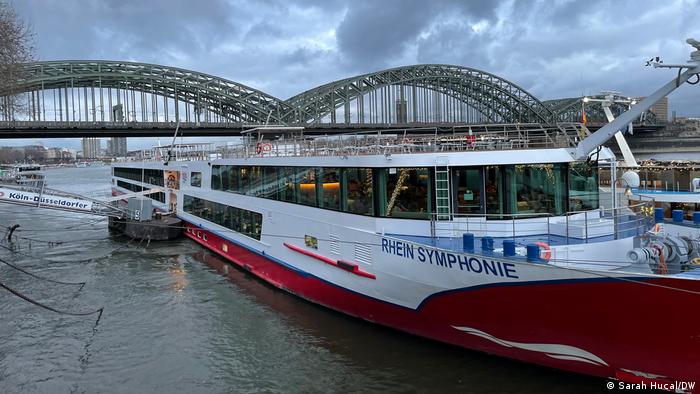 The tour operator, Nicko cruises, offered this particular route 11 times between November to December and we were able to book easily enough online. But as our departure neared, I felt certain it would be cancelled as the number of COVID-19 cases skyrocketed and many Christmas markets around Germany were called off.

My mom, meanwhile, remained unfazed, even as the US State Department advised against travel to Germany due to the pandemic: “I was too busy setting up my Christmas decorations at home to worry about it. I figured whatever happens, we will make the best of it,” she told me. My mom had also just received her booster shot and was feeling confident about her level of protection.

As a fully vaccinated traveler from the US, she did not need to present a negative COVID-19 test or fill out an electronic arrival form since the US was not classified by Germany as a risk country. 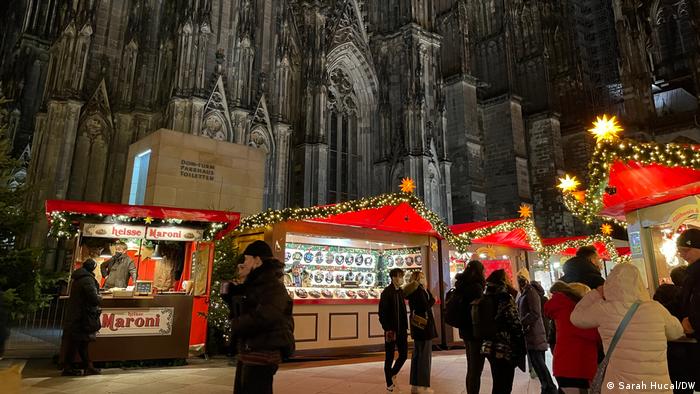 The cruise went ahead as planned. It followed the “2G plus” rule — meaning only vaccinated or recently recovered passengers with negative COVID-19 tests taken before boarding could set sail.

The approximately 139 passengers on our boat, which could hold up to 198 people, were not the only ones cruising down the Rhine this year — a number of German and international cruise liners offer similar Christmas-themed journeys to capitalize on the Christmas spirit.

“We have a lot of passengers who want to get in the right mood for the festive days and see some Christmas markets — and it’s the most comfortable way to do it,” CEO of Nicko cruises, Guido Laukamp, told me.

No such thing as too many Christmas markets

“Christmas has the most elaborate decorations and the season is the longest,” my mom told me when I asked what it was about the holidays that made her tick. “The joy comes from enjoying the warmth of the season with other people,” she continued.

Since all markets we visited followed the “2G” rule and were only open to vaccinated or recently recovered guests, required masks to be worn, and were not especially crowded, it was possible to enjoy the company of others from a safe distance. 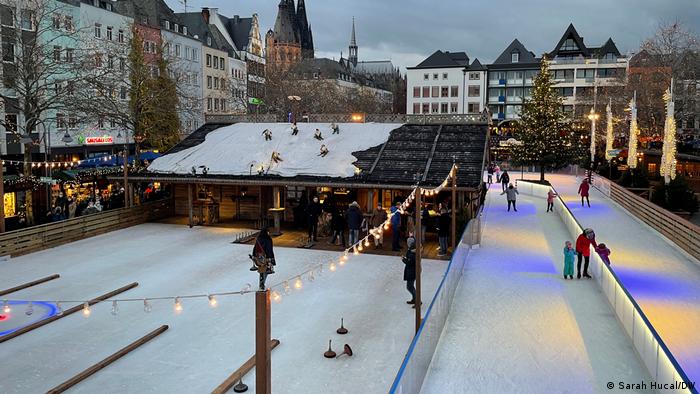 Deb Hucal is essentially an embodiment of father Christmas with the stamina of the Energizer Bunny. She had already seen five Christmas markets — sometimes two a day — in Berlin before we arrived in Cologne to set sail.

Market after market, her face would light up with the joy of a child on Christmas morning, especially in Cologne’s elf-themed “Heinzels Wintermaerchen” market, where she excitedly remarked on every detail that interested her: a painting of elves flying on an exploding beer bottle, a stand selling miniature glass animals, doughy sweets covered in powdered sugar that she wanted to know the ingredients of. Judy and I struggled to keep pace, while my mom zipped from stand to stand, clearly in her element. 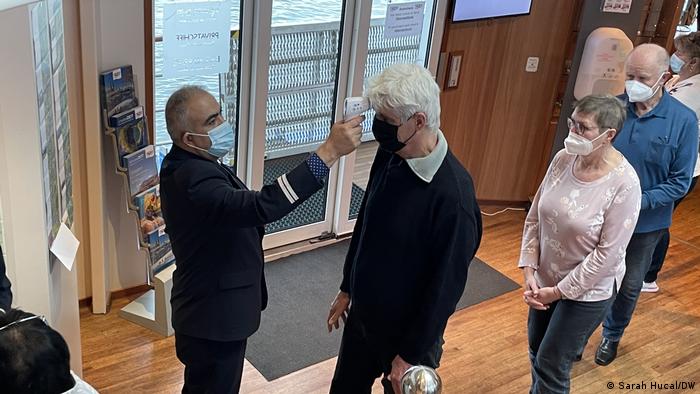 We shared meals on board with our fellow passengers on the MS Rhine Symphonie. I admit it felt strange to dine next to the four strangers, two middle-aged German couples, who were assigned to be our tablemates. I wasn’t quite ready to dig into a breakfast buffet without thinking twice, although the rules required everyone to wear masks on board and at least one plastic glove to touch the serving utensils.

Before entering the dining room for lunch each day, staff members took everyone’s temperature. I had been told by cruise line’s management that there were quarantine cabins prepared should anyone come down with symptoms. 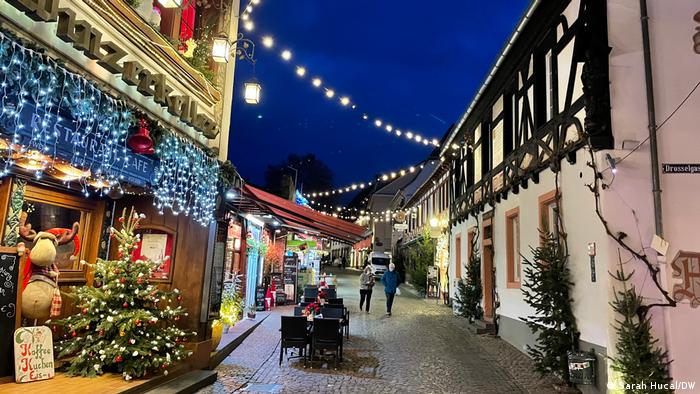 The small town of Rüdesheim was decorated for Christmas, although the main market was cancelled

A Christmas market around every corner… almost

Yet despite the measures — and for better or worse — the pandemic seemed distant while cruising down the Rhine, watching castles on the hills come and go.

On the second day, our boat stopped in the town of Rüdesheim known for its wine-making and historic half-timbered houses.

The main Christmas market, the “Christmas Market of Nations,” known for its handcrafted items and food from around the world, had been cancelled this year but it didn’t bother us: “I didn’t miss the Christmas market because that whole place was christmassy,” my mom remarked.

Indeed, festive lights were hung around the city’s half-timbered buildings, the typical mulled wine — Glühwein —  was still sold. Judy was happy that the town’s famous tiny street, the Drosselgasse, was not packed with tourists as it typically would be.

Our final stop was the Rhine town of Koblenz where the Christmas markets were still on, but spread out throughout the city in a socially distanced fashion. We took the city’s cable car up to the Ehrenbreitstein fortress, which was hosting a light show billed as the “Christmas Garden.” While strolling around the city’s old town afterwards, I was pleased to find Glühwein made with local wine, Merlot and Chardonnay, and ordered a piping hot glass, while my mom tried a sweeter aperitif. 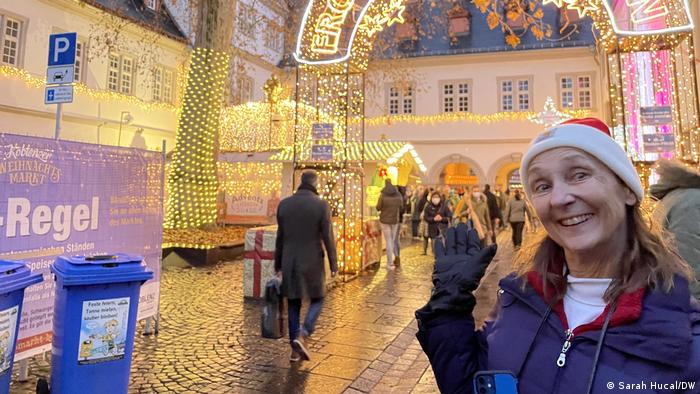 Nothing could stop Deb Hucal from traveling from the USA to Germany to see Christmas markets, like this one in Koblenz

As we stood under the glow of the lights near the baroque city hall of the market at Jesuitenplatz, a song by Andy Williams, one of my mom’s favorite Christmas crooners, played through the speakers. It felt precious to spend this time with my mom, especially as the pandemic had made it more challenging to see family in the US.

“This is perfect. It’s what I came here for” my mom said, smiling “… to be around people having fun and enjoying the atmosphere. It gives me a warm fuzzy feeling.”