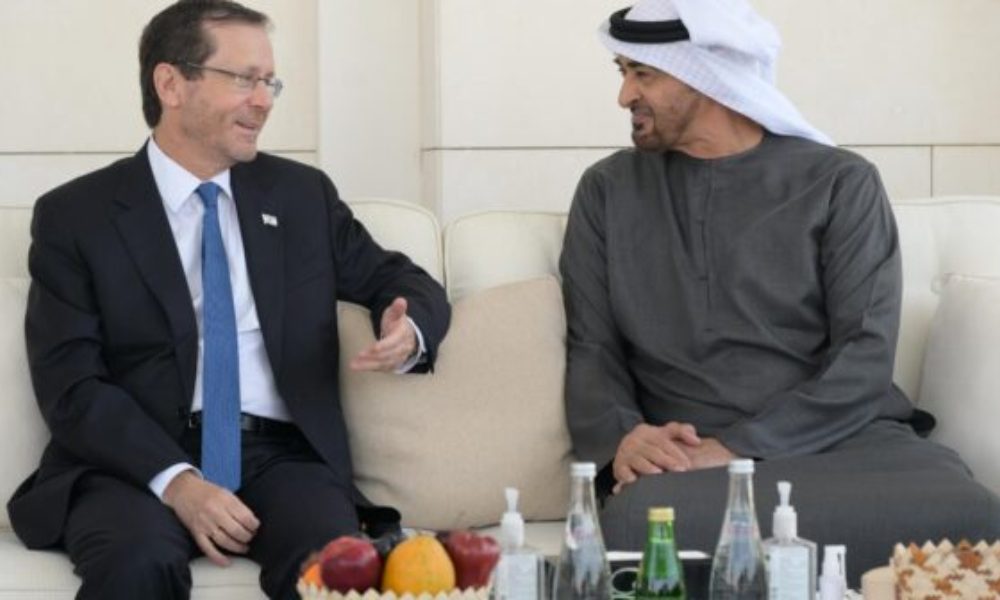 After visiting Bahrain, Israeli President Isaac Herzog met on Monday (5 December) with United Arab Emirates President Sheikh Mohammed bin Zayed Al Nahyan at his private home in Abu Dhabi. “The Abraham Accords are a national consensus in the State of Israel, for all parties and for all factions of Israeli politics,” said President Herzog, writes Yossi Lempkowicz.

“Thank you very much, Mr. President, for coming back again to your second home,” said UAE President Sheikh Mohammed bin Zayed. After visiting Bahrain, Israeli President Isaac Herzog met Monday with the President of the United Arab Emirates Sheikh Mohammed bin Zayed Al Nahyan at his private home in Abu Dhabi. It is their fourth meeting since Herzog took office in July 2021. Herzog was last in the UAE in May, when he traveled to the Gulf nation to convey his condolences on the passing of former ruler Sheikh Khalifa bin Zayed Al Nahyan.

At the start of their meeting, the Israeli President said: “It is a great honor and pleasure to be here, to be your guest, and to meet with you. The UAE is a major linchpin in the movement towards peace in the region. The Abraham Accords are a national consensus in the State of Israel, for all parties and for all factions of Israeli politics.

“After two years of the Abraham Accords, when we took off so beautifully, now we need to reach cruising altitude, meaning upgrading the relationship even further, strengthening it and bringing more nations on board with the Abraham Accords. Thank you very much for your hospitality,” he added.

The UAE president replied: “Thank you very much, Mr. President, for coming back again to your second home. It really means a lot to us. This is a new relationship and we are trying to build a very strong bridge between our two countries, and I think we have built a very strong bridge that we are both proud of. The Abraham Accords are achieving their goals, so we are very proud.”

In the UAE capital, Herzog addressed the Abu Dhabi Space Debate, a forum on space exploration that included Indian Prime Minister Narendra Modi. “As humanity gazes up at the stars, I wish to bring this discussion back to earth because I believe that the greatest promise of space exploration lies not only in discoveries on distant planets but also in rediscovering our potential for collaboration here on the blue planet we call home,” he said.

“Let us move onwards and upwards, not with the competition of a cold war, but with the cooperation of our warm peace. Let us harness the power of space for the promise of Earth. Let us gaze at the heavens with our sights set firmly on our planet. Together, we can take space exploration to new heights and save our planet from new depths. Today we can say: The sky is just the lower limit!” Herzog added.

On Sunday (4 December), Herzog became the first Israeli head of state to make an official visit to Bahrain. He was welcomed in Manama by Bahrain’s Foreign Minister Abdullatif bin Rashid Al Zayani and Ambassador to Israel Khaled Yousif Al Jalahma. The Israeli president then was greeted by King Hamad bin Isa Al Khalifa at Al-Qudaibiya Palace. “This is a great moment and I am extremely honored to be here in the Kingdom of Bahrain. You are at the forefront of making history in the region, where Jews and Muslims can dwell together, the sons of Abraham, and move forward in peace,” said Herzog.

He also participated in a forum with Crown Prince of Bahrain Salman bin Hamad Al Khalifa, also the country’s prime minister, at the Bahrain Economic Development Board. “The Abraham Accords unleashed energy that existed underneath but had to be realized between the nations, and we truly feel in the family. We truly feel that we are meeting our cousins, our brothers and sisters,” said Herzog, adding: “I bring a message of goodwill and congratulations from the people of Israel to the people of Bahrain, hoping to create more business contacts and other relations in all areas of life so we can show the entire region why peace is so important.”

Bahrain’s Foreign Minister Abdul Latef Al Zayani said on Sunday that Manama was “truly looking forward” to working with Israeli Prime Minister-designate Benjamin Netanyahu and his prospective government. Both Zayani and Netanyahu are signatories to the Abraham Accords, which normalized relations between Bahrain and Israel in September 2020. Zayani noted that Manama was seeking “to continue working on the successful achievements” with Israel, and emphasized his conviction that Netanyahu believes in peace, according to Israeli media.