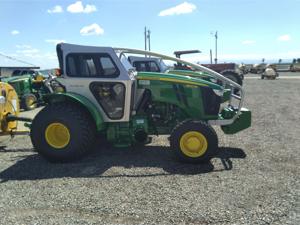 The federal government has provided another $20.7 million in grants to support cleaner air in the San Joaquin Valley by helping pay to switch out polluting equipment for newer, cleaner-burning technologies.

The sum, which was the largest awarded to any single region in the country during the latest funding round by the U.S. Environmental Protection Agency, will be set aside to help defray the costs of replacing old agricultural tractors, heavy-duty trucks and wood-burning devices, such as fireplaces.

These efforts are a key strategy within the San Joaquin Valley Air Pollution Control District, which makes the money available on a cost-share basis to subsidize the introduction of new machines that put out fewer particulates or ozone-related gases that contribute to some of the nation’s worst air quality.

“With these funds and matching investments by local partners, the EPA is acknowledging the unique challenges of the valley and providing much needed and appreciated financial assistance,” the air district’s executive director, Samir Sheikh, said in a news release.

Clean air advocates have been critical of the strategy, saying the district is over-reliant on incentives when it should instead focus on enforcement of existing regulations.

“While change over to the cleanest equipment is helpful, some funds currently are … temporary Band-Aids like natural gas inserts for fireplaces when for clean air and climate justice we should be investing in holistic solutions like electric heat pumps that improve indoor and outdoor air while reducing greenhouse gas emissions,” Executive Director Catherine Garoupa White of the Central Valley Air Quality Coalition said by email Monday.

The EPA granted $8 million to the tractor program, which since 2009 has received more than $540 million toward replacement of nearly 10,000 valley-based ag tractors.

The new sum is expected to pay for switching out about 210 older vehicles. Tractor owners’ share will be $12 million, or 40 percent of the tractors’ total cost. The net pollution savings is estimated at 910 tons of nitrogen oxides, 113 tons of particulate matter and 43 tons of volatile organic chemicals.

Another $8 million was set aside by the federal agency to help replace about 5,760 wood-burning devices, such as fireplaces and pellet stoves. The money will be combined with a district match of $7.2 million and $11.5 million from individual applicants.

That program has netted $43.5 million and resulted in the installation of 24,400 alternative devices since 2008. The latest disbursement is expected to cut almost 2,000 tons of particulate matter.

The air district figures the resulting pollution savings at 75 tons of nitrogen oxides plus a relatively small amount of particulate matter and almost 2 tons of volatile organic chemicals. According to the district, the truck-replacement program has received more than $103 million since 2008 to help buy 2,400 heavy-duty vehicles.

Editor’s note: This story has been revised to clarify the air district’s role in replacing wood-burning devices.