Airbus A380: The end of a multibillion-dollar dream | Business | Economy and finance news from a German perspective | DW

Sir Tim Clark, the president of Emirates airlines, had intended to be in Hamburg this week to attend a historic event — the last delivery of an Airbus A380. It’s the 251st from the series, and the last one ever built.

A total of 123 have been ordered by the carrier from Dubai. Without all these orders, the program would have been shut down years ago. Instead, it was announced in 2019 that production would end in 2021.

But the 72-year-old Clark, an industry legend, has not had it easy with his favorite aircraft. Nobody believed as steadfastly in the A380 as he. Clark had reckoned early on that the world’s biggest aircraft, with room for up to 615 passengers in the Emirates version, was tailor-made for its business model of connecting the entire world — via Dubai.

Initially, he even went so far as to get cabin mock-ups, constructed at the airline’s own expense, to show Airbus that it was possible to install two showers in the front of the upper deck, exactly where he wanted them.

Only later did Airbus and its engine manufacturers reject the idea to develop an improved version with more efficient engines. It’s these four thirsty engines that made the A380 uneconomical for most operators long ago.

Clark was not able to celebrate the final A380 delivery with the fanfare he had hoped for. Airbus rejected the idea of celebrating the end of a program, and then the pandemic situation in Germany rendered useless all efforts toward an event.

“I said to Airbus’ CEO Guillaume Faury: ‘This thing has got real life and legs for us, this is not a funeral, just the last of these great airplanes,'” Clark told DW. “And we will fly the A380 as a very potent aircraft until the mid-2030s, so we’ve got 14 to 15 years before we retire them.”

But now the last A380 will be transferred unceremoniously on Thursday from the Airbus factory in Hamburg-Finkenwerder to Dubai. This will give Emirates a total of 118 service-ready A380s, about half of which are currently in deep storage waiting for better times for the commercial aviation industry.

It seems that the pandemic was the last straw for giant aircraft. Besides the end of the A380, the Boeing 747 program will also stop production in 2022 after more than half a century.

Giant aircraft back in fashion?

In the fall of 2021, however, passenger numbers shot up so rapidly that some airlines were quickly able to deploy their A380 fleets. These aircraft were then able to solve short-term capacity problems.

It gave giant aircraft a new lease on life. British Airways, for example, has been flying four of its dozen A380s since November. Singapore Airlines, having been part of the giant’s world premiere in 2007, also put some of its biggest airliners back in service on the London-Sydney route, among other destinations.

At Qatar Airways, the unexpected reversal of fortunes for the A380 represented a U-turn. At one point, the company operated 10 of them. But in May, Qatar Airways CEO Akbar Al Baker publicly declared: “Looking back, it was the biggest mistake we did, to purchase A380s.”

“We grounded the A380 and never wanted to fly it again, because it is a very inefficient aircraft in fuel burn and emissions, and I don’t think there will be a market for it in the foreseeable future,” he added.

“I know the passengers love it, it’s a very quiet and smart airplane, but the damage it does to the environment should be priority and not the comfort,” he said.

But after a shortage of aircraft cropped up due to problems with the more modern Airbus A350s, the CEO announced in late September that “[u]nfortunately we have no alternative but to fly the A380 again.”

Since November, five of Qatar’s gray giants have taken to the skies once again.

Money down the drain?

In total, the A380 program cost an estimated €30 billion ($33.9 billion) — and most of that money came from European taxpayers. But why was it a flop, at least in economic terms?

“We were blindsided by the engine manufacturers,” said John Leahy, a legendary Airbus aircraft salesman now in retirement, in an interview.

The producers had said they would come up with improved engine systems. Yet those engines were developed secretly and deployed first in the smaller and more efficient 737 Dreamliner from rival Boeing.

Beyond those factors, the main problem was the long delay in bringing the A380 to market. This delay painfully demonstrated how Airbus partners in Germany and France were not on the same page. At the time, they worked on different and incompatible IT systems. 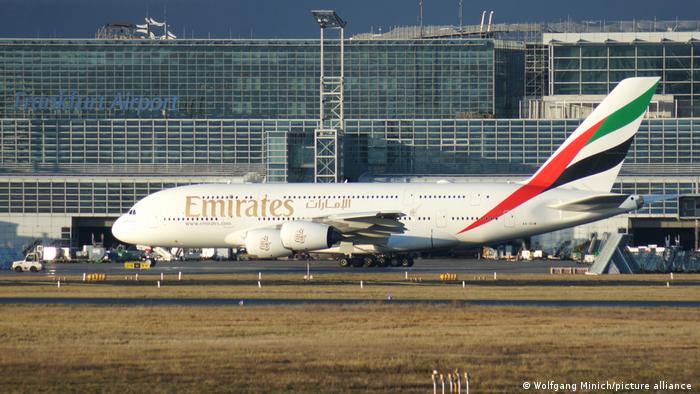 The A380 dwarfs even the terminal at Frankfurt Airport

SARS and a financial crisis

When the A380 finally went into service in 2008, that timing was unfortunate: the SARS pandemic of 2002-2003 was followed by the global financial crisis that led to a collapse in demand for big aircraft.

The market at that point demanded smaller, more efficient aircraft that were capable of flying nonstop long-haul routes that were economical, even from secondary airports.

The smaller Boeing 787 and Airbus A350 ended up as the aircraft providing direct flights between cities like Düsseldorf and Tokyo, or Munich and Bogota. Passengers were happy to avoid big-hub airports, and Airbus lost out with its mass transportation mammoths.

Industry experts and Airbus remain sure of one thing: Despite it being an economic failure, the effort to build the A380 wasn’t entirely in vain. Most importantly, Airbus had been forced to act as a corporate entity for the first time, and the learning effect was paramount.

“All the fiasco around the A380 made the A350 definitely the best airplane program we’ve ever had,” said John Leahy, once the company’s most senior salesman.

The manufacturer was able to finally get rid of “the many little kingdoms” in partner countries. But “spending €25 or €30 billion on the A380 just to get that education seems like a very inefficient way,” Leahy said.

Read More »
PrevPreviousRiver Island launch up to 50% off sale with prices starting from just £2
NextNew Year′s Eve: How to make resolutions for 2022 | Science | In-depth reporting on science and technology | DWNext