After weeks of socially distanced car protests, activists are gearing up for a new campaign of in-person demonstrations. 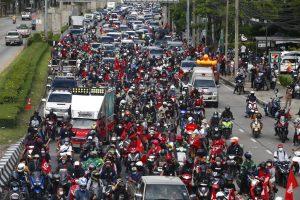 Anti-government protesters block the road with cars and motorcycles as a part of their “car mob” demonstrations along several roads in Bangkok, Thailand, Sunday, August 29, 2021.

Hundreds of Thai protesters drove their cars through the capital Bangkok yesterday in the latest “car mob” calling for the resignation of Prime Minister Prayut Chan-o-cha for a long line of transgressions, including his government’s shambolic handling of the COVID-19 pandemic.

“There is only one message from this car mob, which is ‘Prayut get out!‘” Sombat Boonngamanong, a veteran social activist who helped originate such protests in July, said ahead of the protest, according to the Associated Press. “He has had a chance to run the country for seven years. He has proved that he is incapable of being the country’s leader, so we cannot let him continue.”

Prayut came to power in a military coup in 2014, which was then laundered into civilian government via a deeply flawed election in 2019. Over the past year, however, he has come under increasing pressure from a youth-led campaign of public demonstrations, which have called for his resignation, the drafting of a new and genuinely democratic constitution, and curbs to the power of the monarchy – a demand that few had dared to make publicly until last year.

Yesterday’s demonstration was the fifth “car mob” protest that has been held in recent weeks, as protest leaders seek creative ways of circumventing COVID-19 restrictions and maintaining safe social distancing practices. Activists also believe that the mobile nature of the protests makes them more difficult for police to contain, and reduces the likelihood of violent clashes, such as that which have accompanied traditional protests held since the start of the year.

However, Sombat said that the car mob protests had “reached their peak,” and that protest organizers would revert to large daily in-person gatherings in partnership with the “red shirt” United Front for Democracy or Dictatorship, a movement supporting the exiled former Prime Minister Thaksin Shinawatra, who was ousted from power in another coup in 2006.

“After five car mob rallies, it’s about time to upgrade the protests,” Sombat told the pro-“red shirt” outlet UDD News. “We will engage in a long, peaceful struggle which will not add to the burdens of participants,” he said. He said that the demonstrations would take place in unnamed provincial capitals, and presumably Bangkok.

The campaign of “car mobs” is the latest sign that Thailand’s youth-led anti-government protest movement, which made its first appearance in the second half of 2020, appears to be regaining momentum, even as it has struggled to attract the massive numbers of last year’s demonstrations.

Part of the reason is that in addition to concerns around COVID-19, there is the fierce government counteroffensive that has seen more than 100 people accused of royal defamation and other serious criminal charges. According to the Bangkok Post, some 345 people have been arrested on protest-related charges, while another 615 face charges nationwide for their roles in protests held since the beginning of July. This has no doubt depressed turnout, and turned away many members of the public who would otherwise be sympathetic to the protests’ aims.

Perhaps for this reason, in recent months, controversial and sensitive calls for the reform of the monarchy have been played down in favor of complaints about the manifold failures of Prayut’s government to get the COVID-19 pandemic under control. While Thailand’s wave of infections appears to have passed its peak, the country’s health authorities reported an additional 15,972 infections and 256 deaths this morning, bringing its total caseload to nearly 1.2 million and total death toll to 11,399.