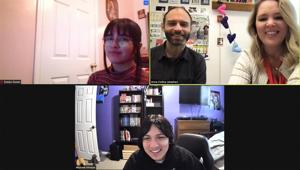 Discussions about whether vaccine mandates are ethically defensible seem to be inescapable these days, from high-level political discourse to coarse dinner-table debates.

In late November, one such conversation — albeit one with firmer philosophical grounding — was taking place in a Zoom call hosted by Santa Fe Community College.

The Bakersfield College ethics bowl team of Evelyn Duran and Michael Hinojos, contending that vaccine mandates are more morally justifiable than vaccine incentives, was responding to the Santa Fe B-team’s commentary on their initial argument in the second round of the Two-Year College Bowl competition.

Santa Fe had suggested that BC’s argument conflicted with informed consent, the idea that a patient must be educated about and grant permission for medical procedures. Duran responded.

“Since informed consent seems to be at odds with public health goals, should we scrap it or modify it for public health crises?” she asked. “Our stance is that we should modify it … Rather than rely strictly on the relationship between a physician and an individual, we need to consider how a public health model would look and benefit the collective good.”

In a pandemic, she stated, informed consent develops between the population and public health organizations.

This big-picture justification became what coach Bryan Russell, a BC philosophy professor, called the team’s “defining moment.” BC beat Santa Fe’s B-team and later its A-team in the finals, in a case about critical race theory, to qualify for a national ethics bowl competition in Cincinnati in February.

It was a surprise for a club in its fourth year, which also featured two tireless students doing work that would usually fall to five or six.

“We were both really nervous going into it,” Duran said, “again, because we didn’t have a lot of experience with it, but it was really rewarding seeing all of our work we’ve put in.”

Russell and fellow coach Anna Collins learned about the ethics bowl at a conference of the American Philosophical Association and they were eager to bring it back to BC. The competition is “a moderated, judged discussion about contemporary ethical issues,” Russell said. Unlike in a debate, the teams need not take opposing positions, but they may use different theories to reach similar conclusions.

Both professors appreciate how it teaches students to “disagree but disagree respectfully,” which Collins said is useful beyond academia.

The actual process of analyzing the cases, preparing a presentation and developing insightful commentary has been fruitful for Hinojos and Duran in other ways. For one, Duran said it’s bolstered her time management.

“You really start to develop keeping your composure when being asked difficult questions that you may not be quite sure how to answer,” Hinojos added.

The team dwindled from five members to just two in the middle of the semester. Russell said he let the pair dictate how seriously they wanted to prepare for the two-year competition. They went full steam ahead.

“Professor Russell’s encouragement was really a big factor,” Duran said. “He seemed kind of impressed with our work … You know, I had never been involved with ethics bowls at all, so I wasn’t really sure how a competition would go, but he thought that we could do it.”

Russell commended the team’s work ethic and writing skills, adding they also had prior interest in some of the social-justice topics featured in the semester’s cases.

“As they got better — and man, did they get better, they just got so poised and confident — I think maybe that drew them to the more competitive side,” Collins said.

Their commitment was tested as the two-year competition was conducted in a monthlong correspondence format due to the pandemic.

“I felt like we were able to put (in) a lot more thought and be able to really get these points nailed down,” Hinojos said, “so when we present it’s perfect. But it is very time-consuming.”

Despite the intensity, the team put its best foot forward and emerged triumphant to earn its spot for nationals. “We’re hoping to do well, but we’re really just happy to be able to compete at all,” Duran said.

In the meantime, BC is cohosting a California competition with Cal State Bakersfield virtually on Saturday, which will bring in the region’s top teams.

It’s not BC’s first exposure to four-year schools — the pandemic has slowed team recruitment but also allowed Russell and Collins to organize scrimmages with schools like UC Santa Cruz and Stanford.

“Once they realize that everybody’s there to learn more about ethics,” Russell said, “and that everybody’s really friendly and collegial, it really goes a long way to building their confidence.”