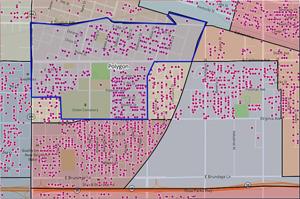 The changes, prompted by the reorganization of Owens Elementary School and Lincoln Junior High in central Bakersfield, attracted no public comment or apparent controversy at recent meetings. With little fanfare or discussion, the board approved staff recommendations.

“I’ll just say, I think the presentation on the boundaries was great at our previous meeting,” said trustee Chris Cruz-Boone.

The board approved changes that will affect which junior high schools elementary students will attend. There are also changes to the attendance boundaries of local elementary schools.

Next fall, Owens Intermediate School will reopen as Lincoln Junior High, serving seventh- and eighth-grade students. Elementary school students from Williams, Jefferson, Owens and Fremont will feed into Lincoln under the new board plan.

There will be one more change to the structure of feeder schools: Horace Mann Elementary students will attend Compton Junior High rather than Cato Middle School.

The board did not hear a presentation on the boundary changes at Tuesday’s meeting but district staff have long stated that the goal of Lincoln Junior High would be to bring another junior high to east Bakersfield. With board support, the district has been moving toward “neighborhood schools” that students can walk to.

Tim Fulenwider, executive director of the instructional support services division, said in a recent presentation that the staff recommendations would also reduce busing times. This was cited as a reason for changing the feeder school Horace Mann to the closer Compton.

Reducing busing and busing times have become important during the pandemic, since staff shortages and absences have hit bus routes.

The approved boundary changes also include changing the school boundaries for elementary schools.

Some students previously zoned for Owens will attend Mt. Vernon, which is well below its current capacity. The board approved a plan for students bounded by California Avenue, Virginia Avenue and Martin Luther King Boulevard to attend Mt. Vernon. This area is not far, but it’s on the other side of railroad tracks, so these students would be bused to school.

Jefferson Elementary School will now have sixth-graders on its campus, as a result of the changes in feeder schools. Because it is one of the smaller campuses in the district, it necessitated a look at its boundaries.

The board approved an option that would move two blocks from Jefferson to Williams Elementary: the blocks bounded by Gage, Oregon, Pacific and Miller streets.