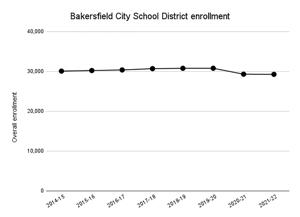 Before the pandemic, the Bakersfield City School District would regularly send out attendance teams from each school to find students who weren’t showing up and work to get them back on track.

Currently, the district has a small team at Rafer Johnson Day School doing this work, but it’s not nearly enough to tackle the current scope of the problem.

“We’re talking perhaps a thousand kids? We need the full team to do that work,” Superintendent Mark Luque told trustees at a recent board study session.

Staffing issues caused by COVID-19 absences have created a cascade of effects diverting social workers from this work. The time has come for the district to discuss when these social workers should be put back on the job, Luque said. He said he would ask for board support to do it as soon as January or February, when the district is hoping to relax some of its strict COVID protocols, but there’s a big caveat, he said.

“That’s going to pull staff from school sites,” he said. “If COVID upticks again, that need doesn’t go away.”

One of the biggest challenges of the 2021-22 academic year has been making sure that classrooms have substitute teachers. Anyone with a teaching certificate can be pulled in to cover a classroom when a teacher is out. That includes support staff at a school site and district office staff. Luque estimated that about 15 to 20 people from the district office covered classrooms last Friday.

Social workers have been called to do the work of support staff at a school site who are covering classrooms. But there are long-term costs in waiting to try to reach those students not in school, Luque said.

Students fall behind and develop bad habits, Luque said. If there are issues that need to be addressed at home, schools serve as a conduit that connects families to those social services. Luque said this is a broader issue that the district will face as the pandemic persists.

“The needs of our kids have only grown; they haven’t decreased and diminished,” Luque said.

BCSD’s enrollment has taken a big hit over the course of the pandemic. Its projected enrollment for 2021-22 is 29,269, down 1,524, or 5 percent, from the 2019-20 school year, according to Sherry Gladin, BCSD’s assistant superintendent of business services. Previously, the district — like most in Kern — had seen steady growth.

The district has seen the biggest hits in transitional kindergarten and kindergarten, which are not required under California law: 36 percent of the district’s enrollment drop is in these grades. Enrollment has been lower in these grades across the county throughout the pandemic, according to the Kern County Superintendent of Schools.

There are also 442 fewer first-graders in BCSD, or 29 percent of the district’s enrollment drop. Every grade has seen a dip in enrollment from 2019-20, except for seventh grade, which held steady but is down from last year.

These numbers don’t take into account students who are enrolled and aren’t showing up regularly. Luque said it’s likely the district knows who they are from its pre-pandemic work addressing chronic absenteeism. In March 2020, the rate was at 10 percent, down from 16.9 percent in years prior, Luque said. He said the district knows how to reengage these students.

“The families who were chronically absent then are likely some of the same families now,” he said.

Enrollment numbers and attendance can affect district funding. Last year, the state funded schools at pre-pandemic numbers to stabilize funding, but there is no “hold harmless” clause this year. It’s also had some more immediate effects. BCSD has put plans for the construction of Paladino Elementary on hold, in part, because of lower enrollment.

Trustee Chris Cruz-Boone said it was tough to try to weigh the urgent needs of a school site against students who have slipped through the cracks. She added that as a child, she had been one of those students who hadn’t been showing up to school until someone from the school came knocking on her door to check on her.

“Do we go looking for those kids, or do we short-staff the school sites that are already, as you said, floundering because there’s not enough support staff?” she said. “I don’t know where the clear line is to make that cut.”

Luque added he was optimistic about a plan to bring a second behavioral intervention specialist on every campus next week, which may help alleviate staffing issues.

During study sessions, the district doesn’t lay out fully fleshed-out plans for the board to authorize with a vote. But Luque said the district has a team of 12 social workers who are trained to do the work of addressing chronic absenteeism in the district.

“They’ll schedule each school; they’ll drive around, they’ll do home visits. They’re fully nuanced in all that work and they do a great job at it,” he said. “They make long-term connections. They just haven’t been allowed to do that work because we’ve been in crisis response.”

The attendance teams also have a probation officer who can become involved when the case gets to the School Attendance Review Boards. Cruz-Boone was concerned whether the probation officers were armed, since there have since been challenges between low-income communities of color and police.

“The punitive police mentality is not at play in our district,” Luque said. “SARB is never a good experience for families, but never have we had a report that the probation officer was aggressive or inappropriate with our students or families.”