PARADISE ISLAND, Bahamas — Boogie Ellis scored 21 of his career-high-tying 27 points after halftime to help USC defeat BYU, 82-76, in a first-round game of the Battle 4 Atlantis on Wednesday.

Ellis made all five of his shots and 11 of his 13 free-throw attempts in the second half for the Trojans (4-1). With the guard leading the way, USC shot 18 for 29 (62.1%) after the break, turning a 31-30 halftime lead into a double-digit margin by the 13-minute mark and ultimately an 18-point bulge with about five minutes left.

From there, the Trojans had some trouble protecting that cushion – and the ball – as the Cougars tried to rally. BYU got a 3-pointer from Rudi Williams followed by an immediate one from Jaxson Robinson after a 5-second violation on USC, then Robinson struck again from the right corner to suddenly cut the deficit to 75-67 with 1:38 left.

But the Cougars, while continuing to keep the pressure on, got no closer until the final 15 seconds when the outcome was largely decided.

Spencer Johnson scored 18 points to lead BYU (3-2), which missed 13 of 18 shots to start the second half as USC made its move out of the break.

Robinson added 16 points while Williams had 15 for BYU.

More to come on this story. 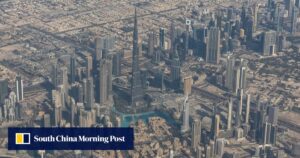