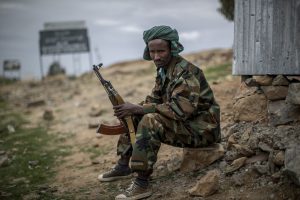 A fighter loyal to the Tigray People’s Liberation Front (TPLF) mans a guard post on the outskirts of the town of Hawzen, then-controlled by the group but later re-taken by government forces, in the Tigray region of northern Ethiopia on May 7, 2021.

China is poised to take a more active role in the Horn of Africa’s security issues, with Foreign Minister Wang Yi announcing the creation of special envoy post for the region.

Wang made his announcement from Kenya, the second stop on his three-country tour of Africa. His visits to Eritrea, Kenya, and Comoros is in keeping with China’s tradition of sending its foreign minister to visit Africa as his first trip of each new year.

Although Wang did not specify any issues the new special envoy would be working on, the most urgent security crisis on the Horn of Africa is the Tigray war. Ethiopia is currently embroiled in a civil war centered on the Tigray region, which the Associated Press dubbed “2021’s hidden conflict.” According to AP’s summary:

Tens of thousands of people have been killed in a war that erupted in November 2020 between Ethiopian forces and fighters from the country’s Tigray region, who dominated the national government before Nobel Peace Prize-winning Prime Minister Abiy Ahmed took office in 2018. The war threatens to fracture one of the world’s most populous nations, with the fate of some 110 million people at stake.

Some of Tigray’s 6 million people have begun starving to death under a months-long government blockade. Thousands of ethnic Tigrayans have been detained or forcibly expelled in an atmosphere stoked by hate speech from some senior officials, to the alarm of human rights groups. [In November] the government declared a state of emergency as Tigray fighters moved closer to the capital, Addis Ababa, leaving a growing number of abuses against ethnic Amhara in their wake. The Tigray forces say they are fighting to lift the blockade on their people, but they also want Abiy out.

Eritrean defense forces have been involved in the Tigray conflict as well, and are accused, along with the Ethiopian National Defense Force and Tigray Defense Forces, of committing war crimes. U.S. Secretary of State Antony Blinken, in announcing U.S. sanctions on Eritrea, accused the country of being a “destabilizing presence in Ethiopia [that] is prolonging the conflict, posing a significant obstacle to a cessation of hostilities, and threatening the integrity of the Ethiopian state.”

That context makes it especially notable that Wang began his latest trip with a stop in Eritrea, where he spoke out against the U.S. sanctions. In sharp contrast to the U.S. rebuke, China elevated its relationship with Eritrea to a strategic partnership during Wang’s visit.

“As African countries’ sincere friend and reliable partner, China is ready to play a constructive part in regional countries’ efforts to realize peace and security in the region, unleash development potential and improve governance,” the spokesperson added.

Foreign Minister Wang himself said that conflicts in the Horn of Africa hamper the region’s “tremendous potential for development” and “such a situation should not be allowed to continue.” He urged Horn of Africa countries to “resolve various ethnic, religious and regional differences in an African way.”

Interestingly, it wasn’t until Wang had left Eritrea and arrived in Kenya that he announced China will appoint a special envoy to the Horn of Africa region. He didn’t provide further details on the timing of the appointment or who will hold the post.

China’s special envoys play a prominent role in mediation efforts, as Helena Legarda of MERICS has found in her research. Given that context, and Wang’s repeated references to concerns about the security situation on the Horn of Africa, it’s reasonable to view the new special envoy position as a prelude to Chinese efforts to help mediate the conflict. China has already experimented with mediation on the African continent, especially in the Sudan and South Sudan conflict.

China has been taking more concrete steps to assist with peacemaking in African countries, which was a key focus of FOCAC 2018. However, its efforts, while increasingly significant, are low-key and often indirect, and thus often overlooked. Along with more traditional forms of security cooperation – military exchanges and arms sales – China is also offering “non-traditional aspects of cooperation such as capacity building programs and investments in human resource development,” Lina Benabdallah has argued.

Abdou Rahim Lema wrote back in 2019 that “recently China has shown unprecedented willingness and (to some extent) readiness to put its shoulder to the wheel in Africa’s efforts to deal with cycles of insecurity and instability.” China, however, prides itself on funneling its security assistance through African partners, working alongside them through their preferred channels. As Lema wrote, “Sino-African security relations are more symbiotic and point to a politics of coincidentally converging interests.”

That is in keeping with Wang’s emphasis on resolving conflicts “in an African way” and opposing intervention by “non-regional forces.” Whenever China’s special envoy is appointed, we can expect the diplomat to attempt to signal-boost existing peace efforts on the Horn of Africa, rather than present an entirely new proposal.

China’s increasing involvement in security issues on the Horn of Africa matches its prominent presence in the region. Djibouti is the site of China’s first overseas military base, while Ethiopia is consistently among the top five recipients of Chinese investment on the continent (in 2020, it ranked fourth; in 2019 it was third.) According to data from the China Africa Research Initiative at Johns Hopkins SAIS, since 2000 China has invested just under $2 billion in Ethiopia, while providing $13.7 billion in loans.

The Associated Press contributed reporting to this story.