More than a million Britons will have Covid this Christmas, official data suggested today as cases rose 9 per cent in less than a week.

UK Health Security Agency (UKHSA) bosses have urged anyone ‘feeling unwell’ to avoid loved ones over the festive period. Frustrated Brits have already vented about how they’ve had to cancel their plans after testing positive.

Office for National Statistics (ONS) figures show 1.2million had the virus on any given day in the week up to December 9 in England. It was up on the 1.1million estimated to have the virus just four days before.

Experts told MailOnline infections are likely to have continued to surged in the weeks since, with more people mixing indoors for festive socials during the cold weather.

Office for National Statistics (ONS) figures show 1.2million had the virus on any given day in the week up to December 9 in England 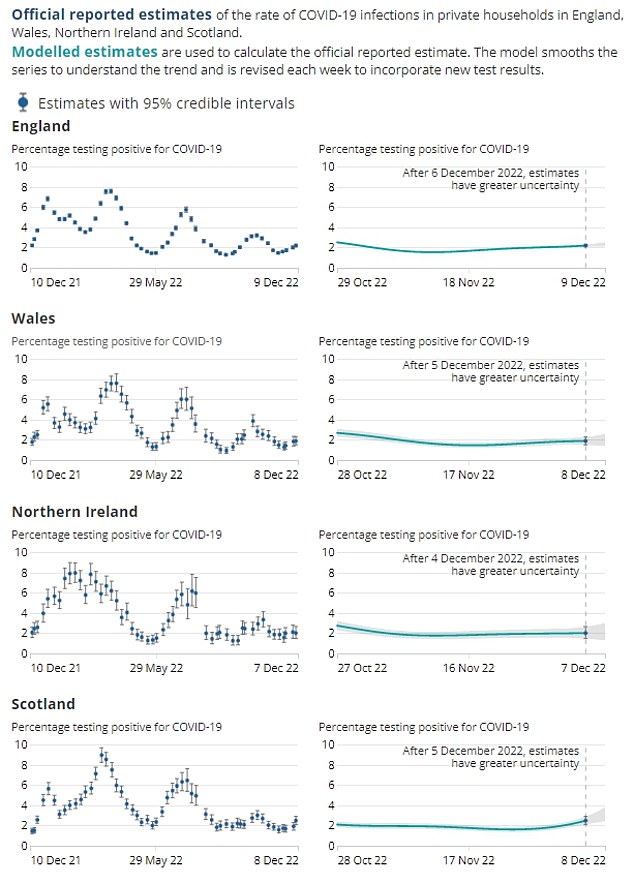 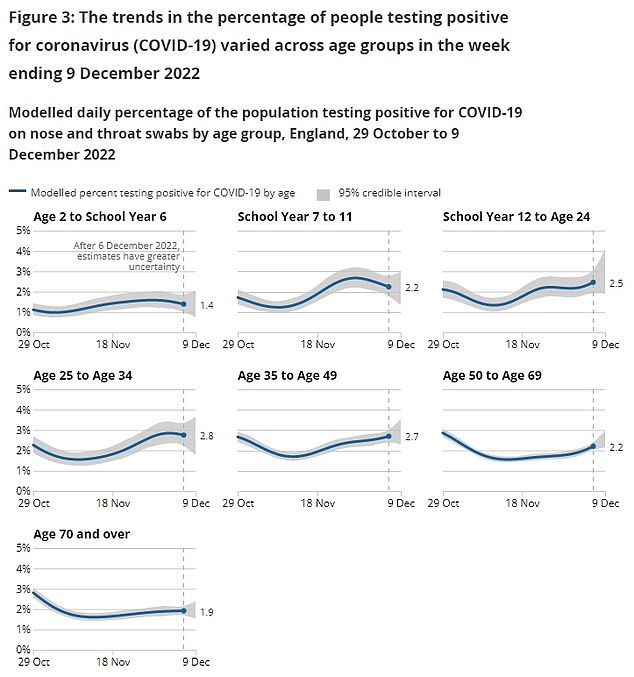 Covid was most prevalent adults aged 25 to 34, with 2.8 per cent of those in the age group testing positive during the week. They were followed by 35- to 39-year-olds (2.7 per cent) 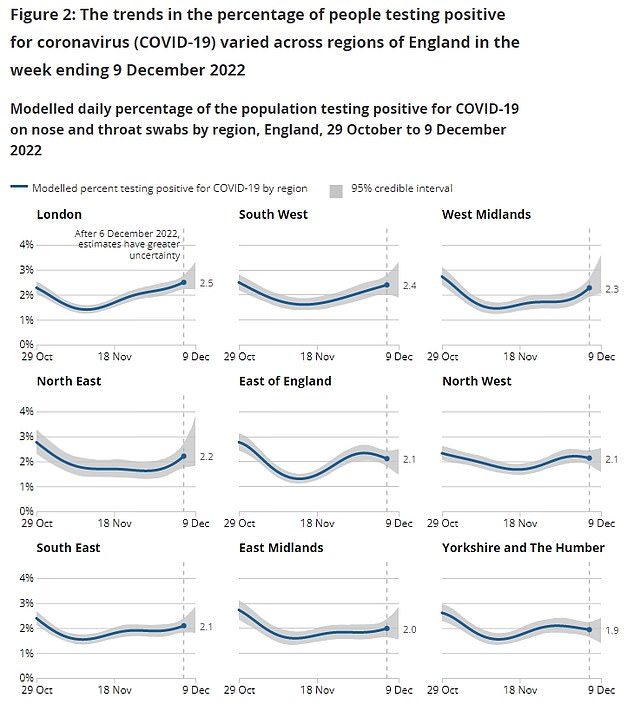 Regionally, infections were most common in London, where 2.5 per cent of the population had the virus, followed by the South West (2.4 per cent), West Midlands (2.3 per cent) and North East (2.2 per cent)

Professor Paul Hunter, a public health expert at the University of East Anglia, said: ‘The ONS data only goes up to 9th December, so [it’s] already somewhat out of date.

‘It does look like infections are still rising but not as quickly as in previous waves, so I suspect we will see infection numbers rising till after Christmas but probably peaking soon after.

‘The run up to Christmas is often associated with increased opportunities for transmission of respiratory viruses but population mixing is much less over the Christmas break.’

More recent data shows the number of people in hospital with Covid in England, Scotland and Wales is on a clear upward trend, with patients in England up 29 per cent in the past week to the highest level for nearly two months.

The surge in Covid comes after Britons were warned of a separate outbreak of flu battering the NHS.

Nearly 60 times as many people were hospitalised with the virus last week as the same time last winter.

Today’s ONS data — the last to be published before Christmas — show Covid cases were also up 30 per cent in a week to 130,900 in Scotland.

In England, Covid was most prevalent adults aged 25 to 34, with 2.8 per cent of those in the age group testing positive during the week.

Regionally, infections were most common in London, where 2.5 per cent of the population had the virus, followed by the South West (2.4 per cent), West Midlands (2.3 per cent) and North East (2.2 per cent).

‘Over half of English regions saw an increase, while it’s a mixed picture for different ages.

‘Infections have increased among most adults under 70, while secondary school age children experienced a decrease in infections.

‘We will continue to monitor the data closely over the coming weeks.’ 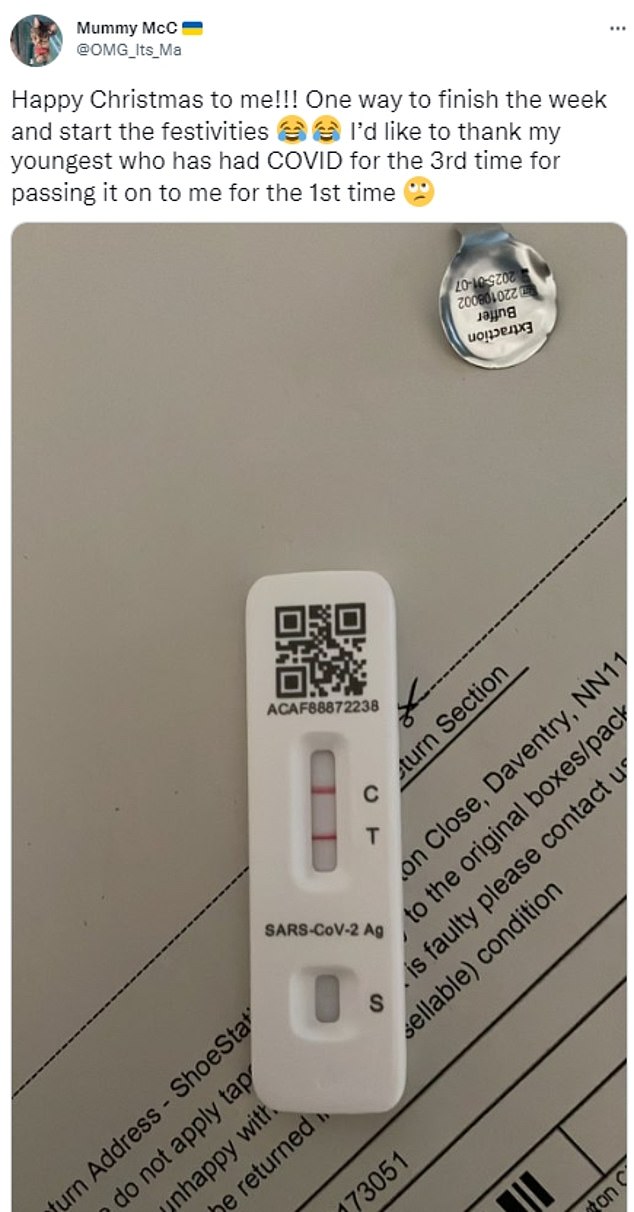 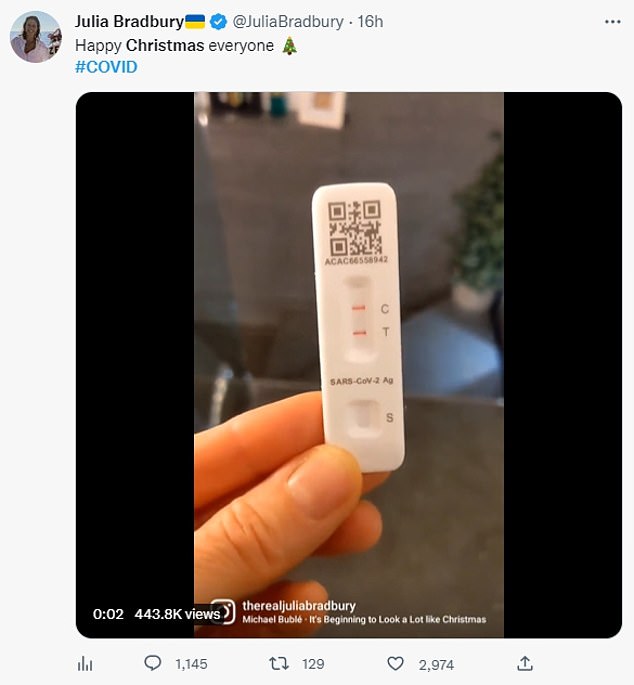 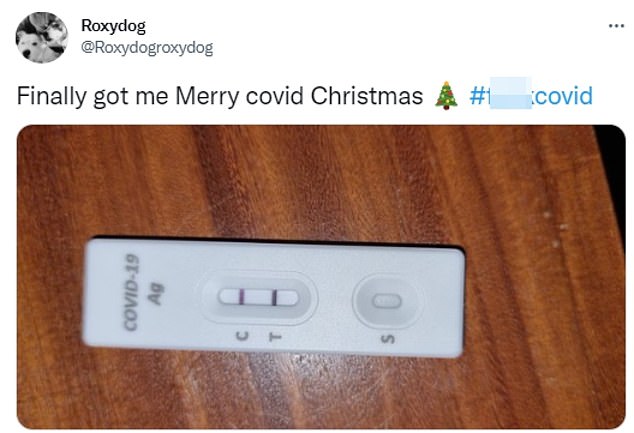 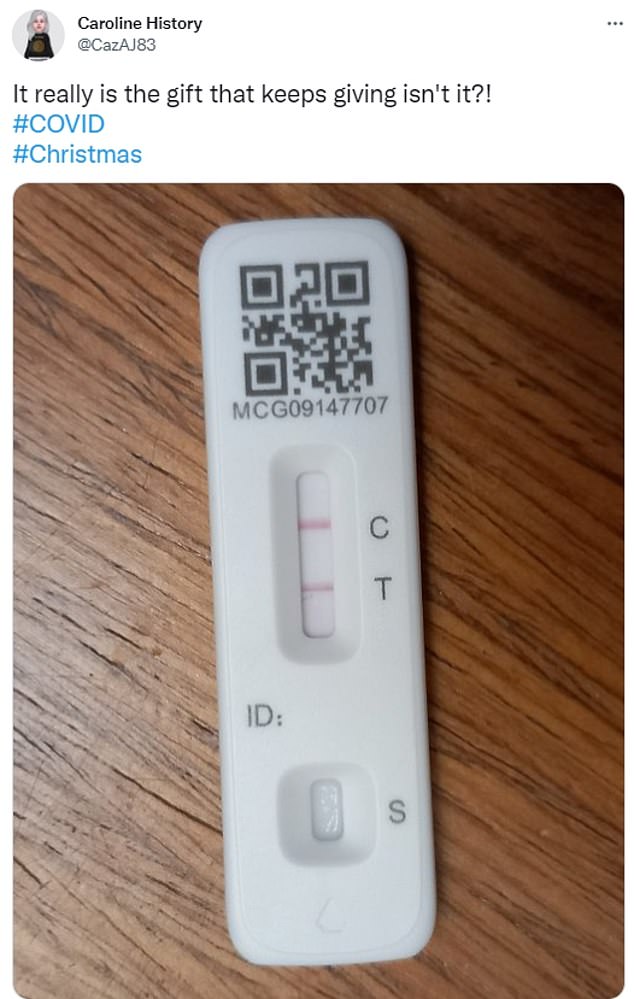 The rise comes after health bosses begged Britons to cancel their Christmas plans if they were suffering with any Covid or flu symptoms.

Dr Mary Ramsay, a director at the UKHSA, said eligible adults should get their flu and Covid jabs.

She added: ‘Both Covid and flu can cause severe illness or even death for those most vulnerable in our communities, and so it is also important to avoid contact with other people if you are unwell in order to help stop infections spreading over the Christmas and new year period.’

Scores of people who have tested positive for the virus this week revealed their festive plans have already been ruined by Covid.

One tweeted: ‘Happy Christmas to me!!! One way to finish the week and start the festivities.

‘I’d like to thank my youngest who has had Covid for the third time for passing it on to me for the first time.’

Another said: ‘Finally got me. Merry Covid Christmas.’

A third added: ‘It really is the gift that keeps on giving isn’t it?’

But some have tried to see the lighter side of things, with one person sharing a meme of the Grinch with his head in a fish bowl and tweeting: ‘Me for the rest of Christmas trust me to catch Covid Christmas is cancelled.’

One woman decked her living room in ‘Covid Christmas’ decorations, with red and green cutouts of the virus replacing traditional baubles.

‘I’ve had to rearrange family Christmas but I’m having Covid Christmas in isolation with two other Covid-positive friends!’ they said.

The 52-year-old had hoped to enjoy the festivities in peace with her partner Gerard Cunningham, three children and plus Julia’s parents Michael and Chrissi, following her breast cancer diagnosis and mastectomy.

People who catch Covid are no longer legally required to isolate but the NHS recommends those who test positive avoid social contacts for at least five days.

Flu admissions did overtake Covid ones earlier this month, but have now slipped behind, although both sets of rates are continuing to balloon week-on-week.

The latest figures come amid fears that more children nationwide are falling ill with both Covid and the flu. 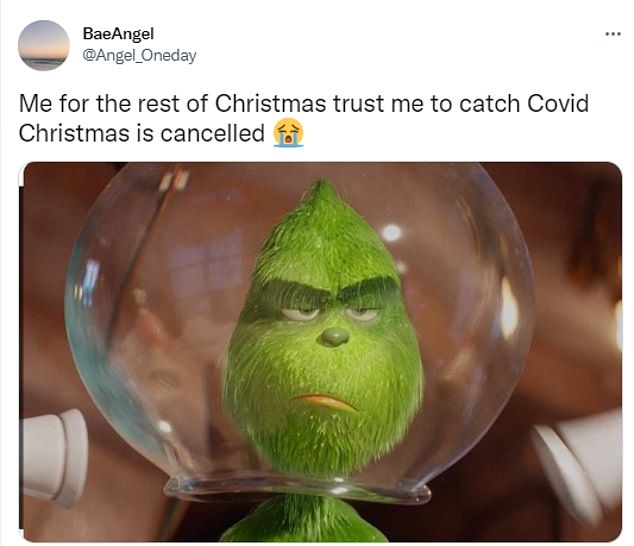 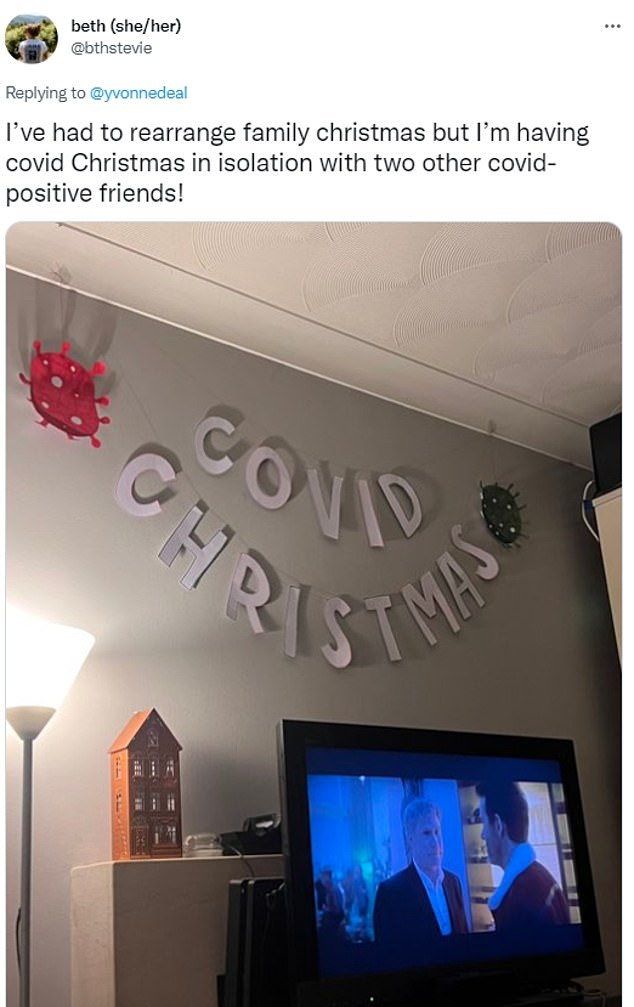 Urging people who feel unwell to stay at home, Dr Susan Hopkins, Chief Medical Advisor at UKHSA, said: ‘Hospitalisations have increased dramatically in those aged 75 and over in the past week, with admissions among children under five remaining high.

‘ICU admissions have also increased this week. NHS services are already under pressure so it’s more important than ever to get protected with the flu vaccine and help keep yourself out of hospital.

‘Most children aged two and three can get a nasal spray flu vaccine through their GP surgery. If you are pregnant or in a clinical risk group, you are also at greater risk, so it is even more important you take up the offer.

‘Anyone over 50 can get a free flu or Covid booster vaccine which can be booked online.

‘We can all take actions to stop flu and other infections spreading, if you feel unwell try to stay home, and if you have to go out — wear a face covering in enclosed spaces. Wash your hands regularly and try to keep rooms well ventilated.’