While Omicron drives record COVID-19 case increases in the U.S., deaths have stayed relatively low so far – with about 1,300 Americans dying each day in the last week, compared to 2,600 deaths per day at this point in 2021.

The variant’s inherently milder qualities, combined with high levels of immunity from vaccination and prior infections, may mean that a low percentage of people infected in the Omicron surge will face severe symptoms.

Experts say the U.S. is showing signs of ‘decoupling,’ in which increases in hospitalizations and deaths no longer directly follow increases in cases.

The U.S. could follow the U.K., where the current Covid mortality rate is 21 times lower than it was during the country’s second wave and experts are saying Omicron ‘should be welcomed.’

Following a large wave of cases in the U.S., some experts say that the variant could lead to even higher levels of population immunity – meaning that future surges will be even less severe. 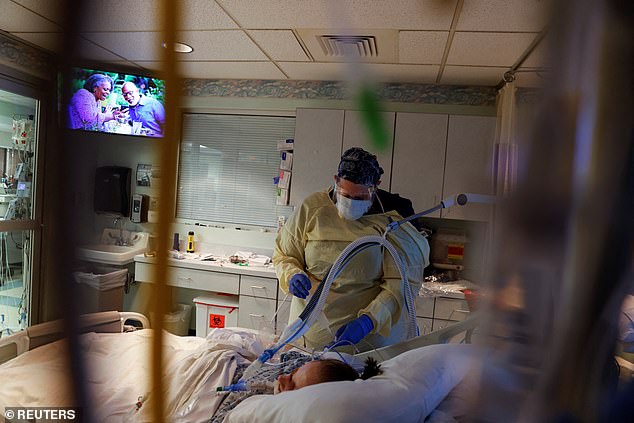 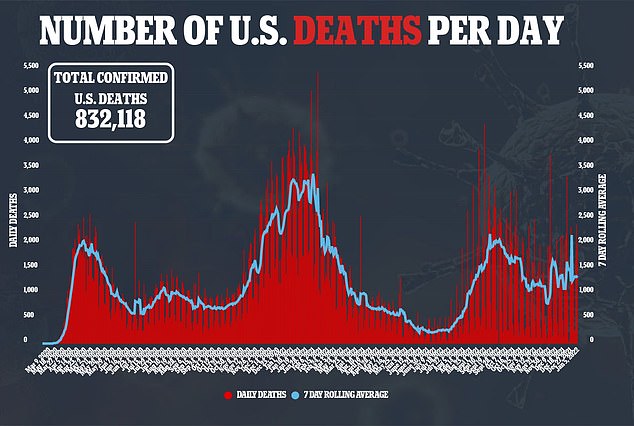 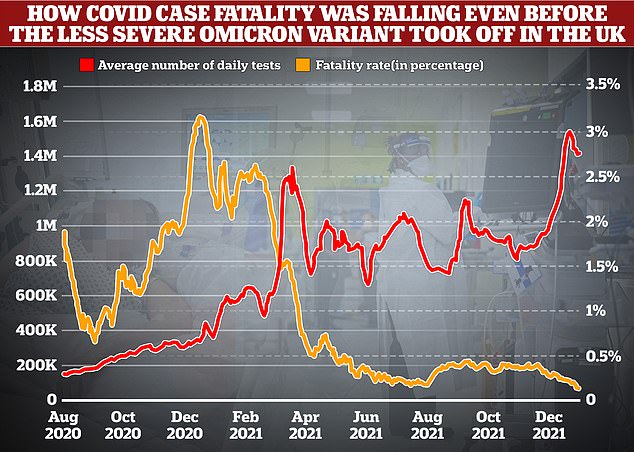 In the U.K., the share of cases leading to death (orange) has remained low even as cases rise to record heights (red), leading to optimism among some experts

The highly contagious Omicron variant is driving record cases across the U.S., with an average of 587,000 new cases reported on a seven-day rolling average, according to data from Johns Hopkins.

On Monday, more than 1 million new cases were reported in a single day – including some cases from holiday backlogs.

The current national case rate is more than twice as high as the rate reported in January 2021, during the U.S.’s last record-breaking surge.

Yet so far, hospitalization and death numbers have remained lower than last winter – both nationally and in many states and cities.

About 85,000 Covid patients are currently hospitalized in America’s hospitals, compared to a peak of 124,000 during last winter’s surge, according to the Centers for Disease Control and Prevention (CDC).

Each day in the past week, about 1,300 Americans died of Covid.

While this is still a high number, it’s about half of the death rate at this time last year – over 2,600 Covid deaths per day.

Experts call this phenomenon ‘decoupling’: hospitalizations and deaths used to increase at the same rate as cases during surges, but now they increase at lower rates.

In the U.S., decoupling may be attributed to both Omicron’s inherent biology and high levels of immunity in the population.

A growing number of studies are showing that Omicron is less likely to cause severe symptoms than past coronavirus strains.

Unlike other variants, Omicron can rapidly replicate in the upper airways – but has limited capacity to wreak havoc in the lungs, where the worst respiratory symptoms take place.

At the same time, the U.S. has high levels of immunity from vaccinations and past infections.

More than 70 percent of Americans have received at least one vaccine dose, while about one-third have been infected at some point, computational biologist Trevor Bedford recently told STAT News.

‘Factored together, that’s 80-odd percent [of people with some immunity,’ Bedford said.

While the vaccines are less effective at protecting against Omicron infections than they were at preventing infection from past strains, vaccine protection against severe disease remains strong. 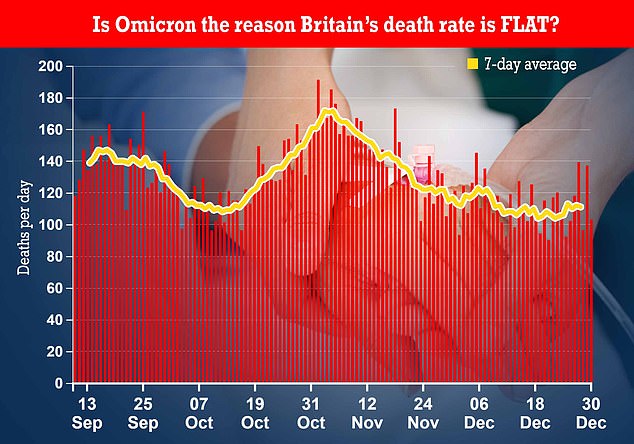 U.K. data show that Covid death rates have barely changed over the last month, even as cases have surged to new records in the country 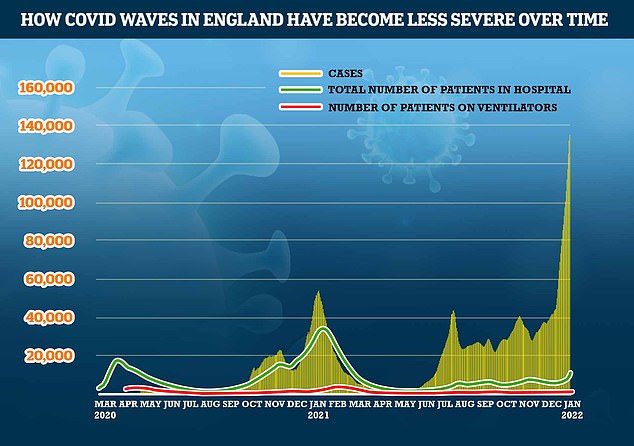 Similarly, the number of patients in U.K. hospitals is a fraction of the levels seen last winter

Experts are observing a similar decoupling pattern in the U.K., which is a couple of weeks ahead of the U.S. in its Omicron wave.

Dr David Livermore, a medical microbiologist at the University of East Anglia, told MailOnline the strain’s emergence could be the best thing to have happened for the pandemic, echoing comments made by health experts in Denmark earlier this week.

‘This has not fed through into an increased death rate – and a rise would have been expected by now, if it was going to happen.

MailOnline analysis found that just 0.15 percent of cases in the U.K. led to a death towards the end of December, compared to three percent during the country’s large second wave last winter.

‘The divergence between case and death rates agrees perfectly with Omicron being highly transmissible but less lethal than earlier variants – exactly as asserted by doctors in South Africa who discovered it,’ Livermore said.

‘It tallies also with studies from Hong Kong and Cambridge showing that Omicron is less able to infect lung cells and more likely to stay in the upper airways, where it does less serious harm,’ he went on.’

‘In all these respects, Omicron is far preferable to the more dangerous variants that proceeded it and its take over should be welcomed.’ 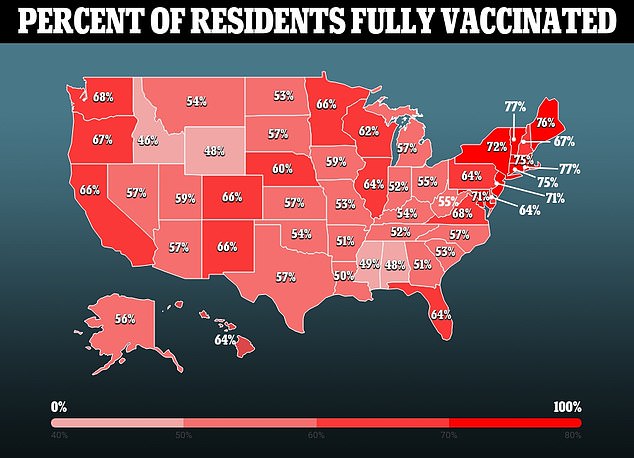 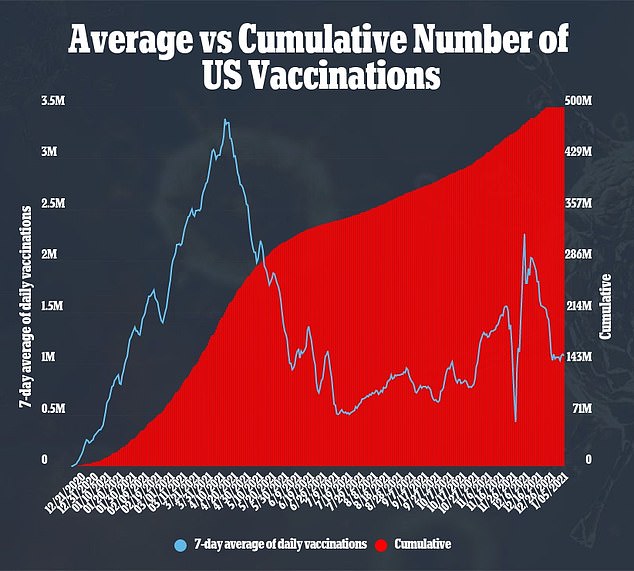 The U.K.’s falling Covid fatality rate could be partially attributed to delayed reports of deaths over the holiday season, Dr Paul Hunter, also at the University of East Anglia, told MailOnline.

The ‘fatality rate for Omicron does seem to be lower than we have seen with previous variants,’ he said, but current figures may be skewed by the delays.

Covid deaths are typically reported with a longer lag time than cases, as it can take days or weeks for a death certificate to be filled out and submitted to health officials.

In the U.S., data experts have noted that death data typically take more time to recover from holiday reporting lags than other types of Covid data.

Still, the numbers so far have given some scientists reason to be optimistic.

Livermore told MailOnline the Omicron variant could be beneficial because its increased transmissibility has helped wipe out more lethal variants, including Delta, and could help prevent future ones from emerging.

‘It’ll then act as a natural vaccine or booster,’ he said. ‘And that, I believe – rather than through human efforts – is how the pandemic will end. It’s how respiratory pandemics ended in the past.’ 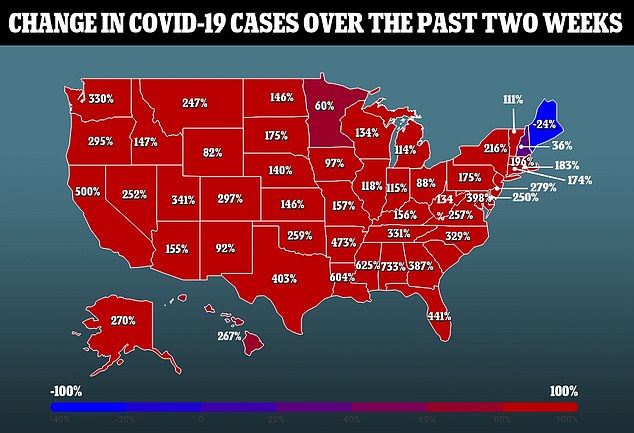 Dr Bob Wachter, chair of the department of medicine at the University of California San Francisco, shared a similar hypothesis on Twitter last week.

‘We’ll have to see how well a case of Omicron protects vs. recurrence, but I’m quite hopeful that it will offer major protection,’ he wrote.

‘By early February,’ Wachter said, ‘we could be in a place where Covid is, in fact, ‘like the flu’ – with the vast majority of the U.S. protected through vaccines or recent infections, folks at higher risk having ready access to an oral treatment that markedly lowers their risk, and a healthcare system no longer stressed to the point of perilousness – for both Covid patients & others needing our services.’

In other words, Omicron will further boost coronavirus immunity in the U.S. – where more than four in five Americans already have some degree of protection from the virus.

As a result, future Covid waves could potentially be evenless severe than the current Omicron wave.