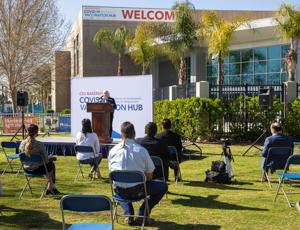 The California State University system is requiring a COVID-19 booster shot for all faculty, staff and students accessing the campus for the upcoming spring semester, CSU officials announced Wednesday.

CSU Chancellor Joseph Castro said, in a statement, that the state university system revised its current vaccination requirement in light of the rapid rise of cases of COVID-19 as the omicron variant spreads.

“Implementing the booster requirement now will help mitigate the potential spread of the variant on campuses as they repopulate in January after the winter break,” Castro said, in a statement.

Under the new CSU requirement, those accessing the campus will be required to have their booster shot by Feb. 28, or six months after an individual received the final dose of the original vaccination — whichever is later.

In a letter to students and employees, Cal State Bakersfield Lynnette Zelezny encouraged boosters even sooner.

“We encourage our Runner community to continue to be vigilant on health and safety, and to get a booster during the holiday, if eligible,” she wrote.

The previous vaccination policy allows students and employees to seek exemptions on medical and religious grounds and test weekly instead. That will not change under the revised policy. Zelezny added that administrative exemptions for those who do not come on campus will continue.

Employees represented by unions will not be subject to the booster requirement until the CSU conducts the meet-and-confer process systemwide.

Krystal Raynes, a CSUB student and student representative on the CSU board of trustees, applauded the CSU system for requiring booster shots, which increase the efficacy of COVID-19 vaccines.

“I’m glad that the CSU system is moving forward to say, ‘We value safety,'” Raynes said. “This will ensure our campuses aren’t hot spots for infections. I think it’s a great step to move forward with the science.“

She noted that the move follows on the heels of the UC system also requiring booster shots. Some of the UC campuses are also planning to begin the semester online.

Zelezny told the CSUB community to expect more information in the new year. She reminded the community that free vaccinations — including boosters — are available on the main CSUB campus every Wednesday, beginning Jan. 5, from 10 a.m. to 2 p.m. in the Albertson Room inside the Dore Theater. In the meantime, she suggested head to MyTurn.ca.gov to schedule an appointment.

CSU’s original vaccination requirement went into effect for most groups on Sept. 30. Approximately two months later, nearly 100 percent of employees and 91 percent of students have shown proof of being fully vaccinated, or they have applied for a religious, medical or administrative exemption, according to university data.

At that time, the overall rate for the 11,157 students enrolled at CSUB fall semester who have had their vaccine cards verified is 72.4 percent. That is lower than the 95 percent rate in the CSU system but much higher than Kern County’s vaccination rate for 18 to 49 years old, which was just shy of 49.4 percent.