Cuomo says almost all COVID restrictions will be removed if 1.4% more New Yorkers get first dose

New York Governor Andrew Cuomo announced on Monday that the state will lift most COVID-19 restrictions when 70 percent of adults have received at least one vaccine dose.

As of Monday, 68.6 percent are at least partially vaccinated, putting the state just 1.4 percent short of the threshold.

‘To do that we have to be at 70 percent. When we hit 70 percent, then I’ll feel comfortable saying to the people of this state we can relax virtually all restrictions.’

Parts of the state are already planning their reopen, with New York City set to drop all mitigation measures on July 1, and hold a mega-concert in Central Park in August to celebrate the end of the pandemic. 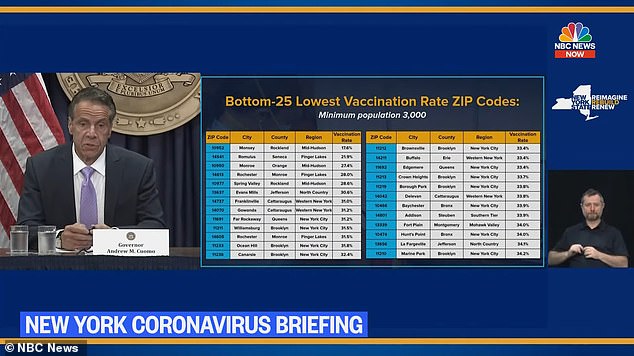 At the press conference, Cuomo said that when New York hits the 70 percent mark, all capacity restrictions, social distancing mandates, health screening mandates and cleaning and disinfecting requirements will be lifted.

As an example, New Yorkers will still be required to wear masks on public transit, and students still have to wear masks inside at school – while being allowed to remove their masks outside.

Cuomo also said that the state would continue to abide by guidelines set by the Centers for Disease Control and Prevention (CDC), which include unvaccinated people wearing masks indoors.

The governor also said that his strategy to get the remaining unvaccinated New Yorkers jabbed is to focus on younger people and on certain ZIP codes that have lower vaccination rates than their peers.

Currently, just under 11 million New Yorkers have received one dose of a COVID-19 vaccine. 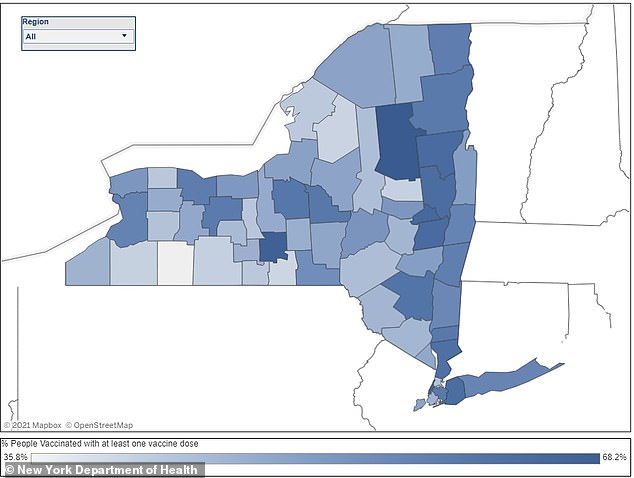 About 11 million New Yorkers have received at least one dose of a Covid-19 vaccine. Many counties in the western parts of the state have fallen behind the counties out east

Vaccine demand in general has fallen in recent weeks, both across the state and across the country.

After reaching a peak of 3.4 million per day on average in mid-April, vaccine demand has declined to an average of around 500,000.

Health experts attribute the decline in vaccine demand to everyone who wanted the vaccine already having got it, and the leftover group either being hesitant to receive the vaccine or facing some sort of barrier.

Around 24 percent of Americans do not plan on receiving the vaccine, according to a recent Gallup poll, and more than three-fourths of that group are unlikely to change their mind about getting vaccinated.

Cuomo has attempted to boost vaccine demand using a vaccine lottery, the same as many states have done.

Last month, New Yorkers who got vaccinated at a qualifying vaccine site from May 24 to May 28 were given a free $20 lottery scratcher. 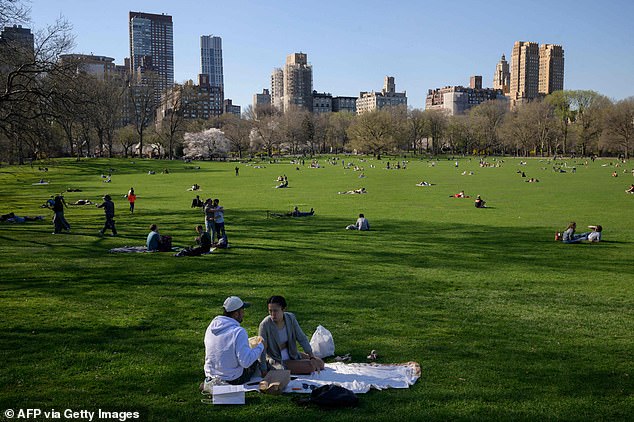 As Cuomo looks towards the final stages of the states vaccine rollout, New York City Mayor Bill de Blasio is already working to kick off post-pandemic life in his city.

The mayor has enlisted music produced Clive Davis to put together a lineup for a weekend music event, tentatively set for August 21, to celebrate the city’s reopening.

‘This concert is going to be a once in a lifetime opportunity,’ de Blasio said.

‘It’s going to be an amazing lineup. The whole week is going to be like nothing you’ve ever seen before in New York City.’

Davis told The New York Times he is aiming to recruit eight ‘iconic’ stars for the show, which will last three hours for 60,000 attendees.

‘I can’t think of a better place than the Great Lawn of Central Park to be the place where you say that New York is reopening,’ Davis said.