Don’t give granny flu at Christmas: Calls not to mix with relatives if you are ill

Britons were last night urged not to mix with loved ones if they feel unwell over Christmas to avoid passing on illnesses and overwhelming the NHS.

The health service is braced for its ‘darkest’ ever festive period as it battles a flu surge, a bed-blocking crisis and the aftermath of strikes.

Bosses warn the service is going into the weekend with an unsafe number of patients on wards, skeleton staffing levels and is ‘dangerously close to overheating completely’.

It comes as ambulance handover delays at A&E are the worst on record, leaving crews unable to respond to new 999 calls for hours at a time. And enquiries to the NHS 111 helpline are approaching an all-time high, with worried parents seeking advice on the Strep A outbreak raging through schools.

Saffron Cordery, chief executive of NHS Providers, said: ‘Trust leaders are expecting this Christmas to be one of their darkest to date.’

And Dr Mary Ramsay, a director at the UK Health Security Agency, said eligible adults should get their flu and Covid jabs.

She added: ‘Both Covid-19 and flu can cause severe illness or even death for those most vulnerable in our communities, and so it is also important to avoid contact with other people if you are unwell in order to help stop infections spreading over the Christmas and new year period.’

There are fears that patients who delayed seeking care when nurses and ambulance staff picketed this week will now scramble to be seen. However, there are likely to be fewer staff available to deal with the influx as hospitals operate stripped back weekend and Christmas Day rotas.

Mrs Cordery added: ‘After very few flu cases in the last two years, in part due to social distancing during the pandemic, this flu season is looking far more severe compared to recent years. The surge… has impacted bed occupancy, which continues to be above levels considered safe.’

Patricia Marquis, director for England at the Royal College of Nursing, said: ‘These figures suggest there is absolutely no slack in the system, which is dangerously close to overheating completely.’

Dr Ian Higginson, vice president of the Royal College of Emergency Medicine, said: ‘We are worried that there will be no room at the inn for our patients, and that the following weeks could be some of the toughest we have ever experienced.’ 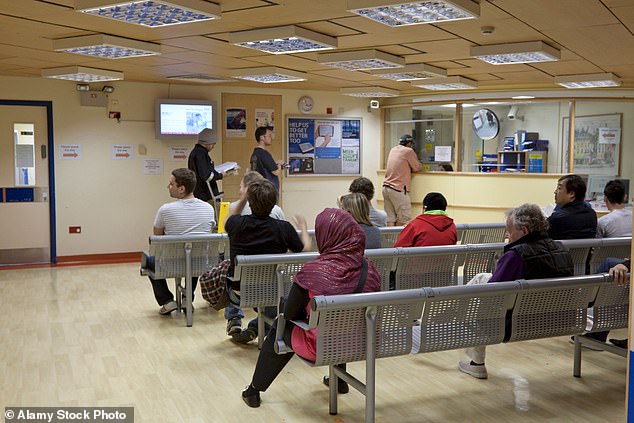 Bosses warn the service is going into the weekend with an unsafe number of patients on wards, skeleton staffing levels and is ‘dangerously close to overheating completely’ 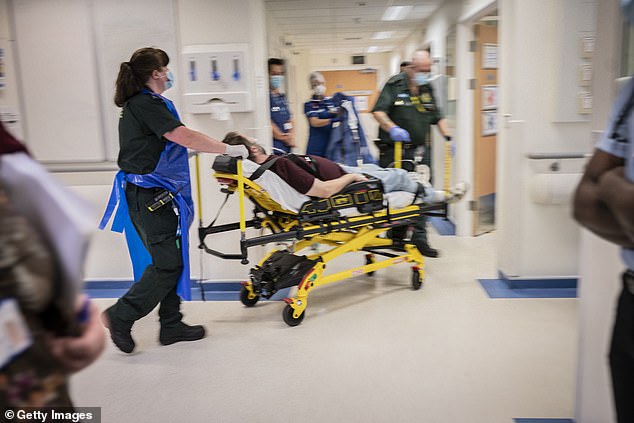 The health service is braced for its ‘darkest’ ever festive period as it battles a flu surge, a bed-blocking crisis and the aftermath of strikes

An average of 1,939 patients with flu were in hospital each day last week – up 67 per cent on 1,162 the previous week, according to NHS England. There has also been a surge in the number of flu patients in critical care beds, with the daily average standing at 149 last week.

At the equivalent point last year, the NHS had only two flu patients a day in critical care and 32 in general beds. One in four ambulance patients in England – 16,379 in total – waited more than an hour to be handed to A&E teams last week thanks to a combination of bed shortages and increased demand.

NHS England said this was ‘near-record’ level, up almost 60 per cent from the 452,644 calls in the equivalent week in 2021. The rise in demand is understood to be partly driven by parents concerned about symptoms of Strep A. Meanwhile, the number of Covid cases in England’s hospitals hit 8,643 – the highest since October 28.

Leyla Hannbeck, chief executive of the Association of Independent Multiple Pharmacies, said chemists are facing ‘unbearable’ levels of violence and abuse as a result of medicine shortages and health service backlogs. She said incidents have risen three-fold, adding: ‘We have had pharmacists being threatened that their house will be burnt, harm to their family, knife threats, etc. It is very scary.’