Consuming grapes significantly increased the diversity of bacteria in the gut, which is considered essential to a strong immune system, the experts found.

Additionally, eating grapes significantly decreased levels of cholesterol, the fat-like substance in our blood that can clog up the arteries and lead to heart diseases.

Eating grapes was also found to reduce levels of bile acids, which play an integral role in metabolising, or processing, cholesterol.

It has long been known that grapes and other fruits like apples contains antioxidants called polyphenols – organic compounds naturally present in plants – which keep blood vessels healthy and flexible for good circulation. 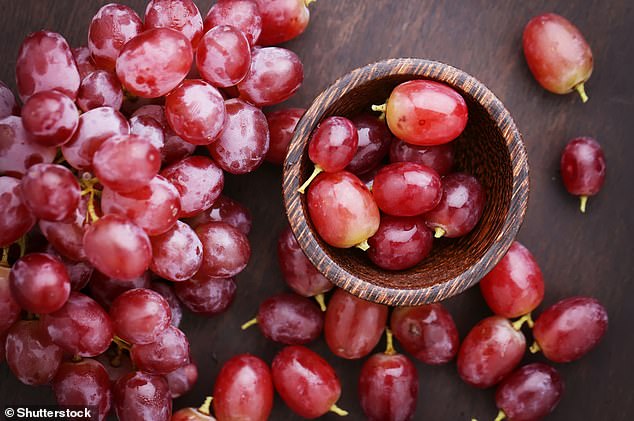 Grapes and other fruits like apples contains antioxidants called polyphenols. These organic compounds are naturally present in plants.

There are more than 8,000 types of polyphenols, including stilbenes in vegetables and resveratrol in red wine.

The new study was led by Zhaoping Li, a nutritionist and professor of medicine at the University of California, Los Angeles, and published in the journal Nutrients.

‘We found that grapes have a beneficial effect on gut bacteria, which is great news, since a healthy gut is critical to good health,’ said Professor Li.

‘This study deepens our knowledge and expands the range of health benefits for grapes, even as the study reinforces the heart health benefits of grapes with lowered cholesterol.’

For the study, the experts analysed the microbiota – the trillion-strong community of microorganisms – of centenarians based on their stool samples.

In total, 19 healthy subjects consumed a low-polyphenol and low-fibre diet for four weeks.

For another four weeks, they were given 46 grams of grape powder per day for four weeks, while continuing to consume the low-fibre and low-polyphenol diet.

Stool and urine samples were collected before and at the end of the grape powder supplementation period. 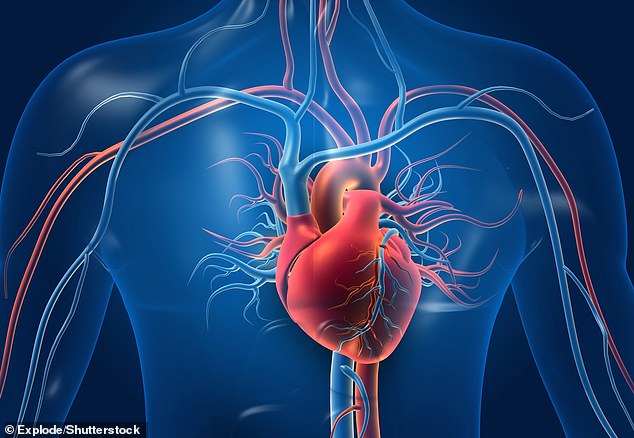 After four weeks of grape consumption there was an increase in microbial diversity as measured by the Shannon index, a commonly used tool for measuring diversity of species.

Among the beneficial bacteria that increased was Akkermansia, a bacteria of keen interest for its beneficial effect on glucose and lipid metabolism, as well as on the integrity of the intestinal lining.

Bile acids – steroid acids which are linked to cholesterol metabolism – decreased by 40.9 per cent, they found.

The findings suggest a promising new role for grapes in gut health and reinforce the benefits of grapes on heart health, according to the team.

Previous research has already suggested a link between consuming grapes in many forms, including red wine, and heart benefits. 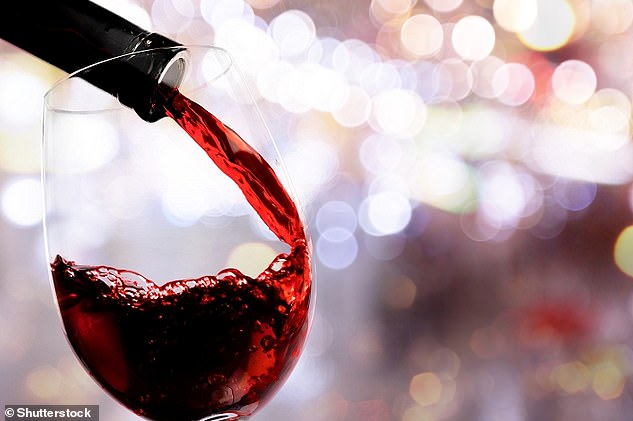 Grapes in various forms, including powders and red wine (pictured) has already been linked to improved heart heath (stock image)

According to the team, another type of phytochemical called flavonoids – the abundant nutrients in fruits, vegetables, tea and other plant-based foods – appear to have a positive effect on blood pressure levels.

Flavonoids are broken down by the trillion-strong community of microorganisms in our gut, known as the microbiota.

Back in 2010, University of Michigan researchers studied the effect of regular table grapes (a blend of green, red and black grapes) mixed into a powdered form and integrated into the diets of lab rats as part of a high-fat, American style diet.

After three months, the rats that received the grape-enriched diet had lower blood pressure, better heart function, and reduced indicators of inflammation in the heart and the blood than rats who received no grape powder.

Natural compounds found in apples can reduce the risk of developing Alzheimer’s and other forms of dementia, scientists reported in 2021.

High concentrations of compounds in apples and other plants, known as ‘phytochemicals’ or ‘phytonutrients’, stimulate the creation of neurons, in a process called neurogenesis.

Neurons are highly excitable cell that transmits information to parts of the body via electrical signals – and they boost our learning and memory abilities.

Two compounds – quercetin in apple peel and dihydroxybezoic acid (DHBA) in apple flesh – generated neurons in the brains of mice in lab tests.

Interestingly, apple juice was not found to significantly contribute to neurogenesis, suggesting the benefits apply to eating the whole apple and not just a glass of juice.

Read More »
PrevPreviousUK holiday: A review of The Lion & Pheasant hotel in Shrewsbury
NextMum killed in front of children honoured as ‘beautiful’, passionate about helping womenNext