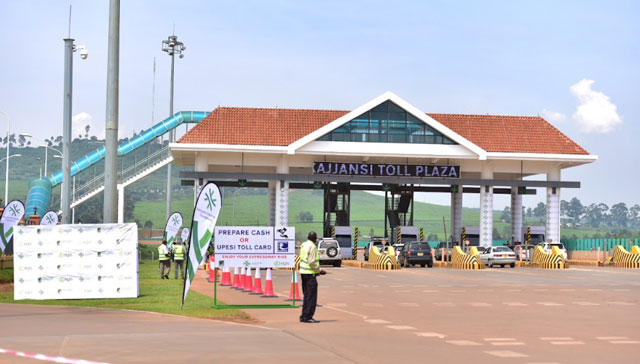 Entebbe, Uganda | THE INDEPENDENT | Payment of user toll fees has started at the Kampala-Entebbe Expressway.

Works and Transport Minister Gen. Edward Katumba Wamala who launched the commencement of toll collections at Kajjansi said the collections will be used to maintain and repay a $350 million loan that Uganda used to construct the expressway.
The government acquired the loan from the Exim Bank of China in May 2011, to finance the construction of the 51.4km Kampala-Entebbe Expressway.

According to the loan agreement, the loan repayment schedule runs from July 21, 2019, to January 21, 2032. In the 13-year repayment period, the government plans to pay 26.8 million US Dollars, a year.

Initially, the government had planned to repay the loan through revenues from the road toll on the Expressway upon its completion. However, the road toll system had not been implemented and the road was opened to traffic in June 2018.

Now, with the legal framework in place, Katumba says that tolling roads will be a source of revenue generation to curb borrowing for infrastructural projects.

Users are paying between Shillings 3,000 to shillings 18,000 per trip with discounted rates for weekly and monthly trips.

The tolling exercise which is implemented by French Firm Egis Operations SPA started from the Kajjansi toll station at 10 a.m., Busega at 2 p.m. and 5 p.m. at Mpala tolling station.

It is estimated that 2,000 cars pass through the Mpala tolling station daily. Among these are incoming air passengers, airport taxis, visitors and Entebbe residents.

Joy Nabaasa, the Public Relations Manager of French Firm Egis, which was contracted to maintain the road and collect the toll says the tolling exercise started without a glitch and that the company will ensure cards are accessible at petrol stations. She is encouraging users to get cards according to their movements so that they avoid making losses for trips not taken.

Nabaasa says the trips paid for expire once the paid-for period elapses.

But residents of Entebbe who work, or travel frequently to Kampala have want Egis to revise their policy on expired trips.