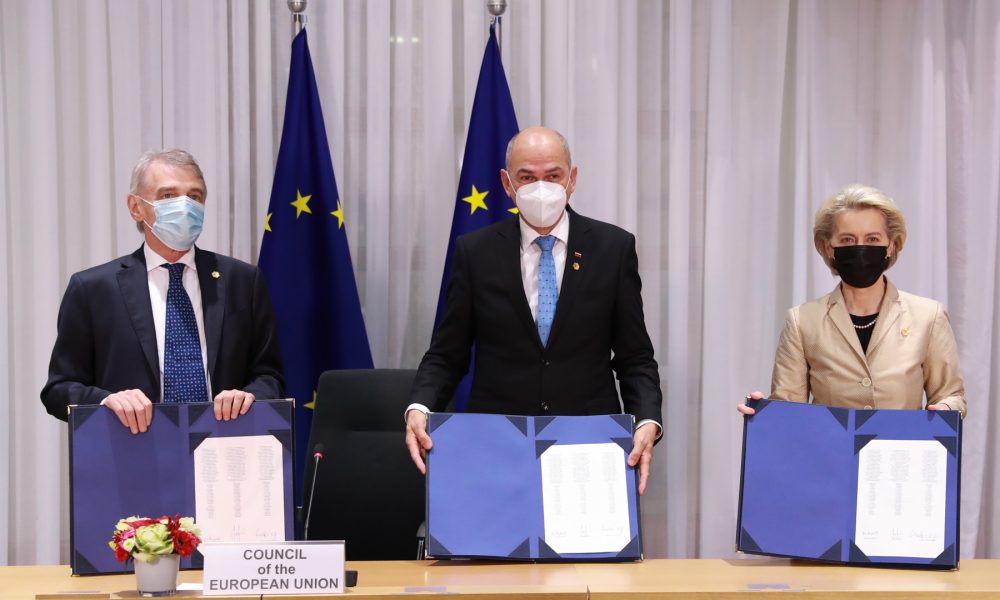 The leaders of the EU institutions signed a Joint Declaration identifying key legislative priorities for 2022, and welcomed progress on the 2021 priorities.

European Parliament President David Sassoli, Slovenian Prime Minister Janez Janša, on behalf of the Presidency of the Council, and Commission President Ursula von der Leyen signed the Joint Declaration on EU legislative priorities for 2022. The Declaration sets out the institutions’ shared vision for a transformed, more resilient Europe. It demonstrates the institutions’ determination to enable the EU to emerge stronger from the COVID-19 pandemic and the dramatic consequences of climate change and other global crises.

President Sassoli said: “We are committed to delivering a stronger, fairer, more sustainable, more digital and more resilient Europe for our citizens. The European Union should stand proudly for its core values and leave no one behind.”

Prime Minister Janša said: “Our three Institutions are united in delivering an ambitious political and legislative agenda that aims to enhance Europe’s resilience and promote its recovery, enabling us all to build back better together. The Joint Declaration on the EU’s legislative priorities for 2022 that we sign today builds on what we achieved in the current year and reaffirms our commitment to a fairer, greener and more digital Europe, a Union that looks to the future and responds to citizens’ expectations without leaving anyone behind.”

President von der Leyen said: “Europe must deliver solutions to citizens immediate problems, notably on the pandemic and its fallout on their daily life, as well as to the long term challenges we face together, like climate change. Our joint declaration shows our commitment to working hard together to deliver solutions on all these issues, from health to climate change, from digital transformation to broad economic prosperity.”

Today’s Joint Declaration highlights key legislative proposals that are currently in the hands of the co-legislators, or will be put forward by the European Commission by the autumn of 2022. It commits the three institutions to give utmost priority to a set of initiatives aimed at delivering on the European Green Deal, achieving a Europe fit for the digital age, creating an economy that works for people, advancing a stronger Europe in the world, promoting our European way of life, and protecting and strengthening our democracy and defending our common European values.

The leaders of the three institutions also welcomed the achievements of 2021. This includes the adoption of the ambitious 2021-2027 Multiannual Financial Framework package of measures, and the extraordinary effort that allowed the EU Digital COVID Certificate to be adopted within two months so that citizens could travel freely within the EU. Moreover, important legislation was adopted for a number of priority areas already identified in the 2021 Joint Declaration, amongst them, a European Climate Law, a European Cybersecurity Competence Centre, the EU Blue Card for highly skilled migrant workers, rules on country-by-country tax reporting, a European Union regime for the control of dual use items, implementation of the European travel information and authorisation system, as well as legislation on preventing the dissemination of terrorist content and tackling child sexual abuse online. Other priority proposals, including the eighth Environment Action Programme, extending the benefits from EU-wide roaming for 10 more years, and reinforced mandates for the European Medicines Agency and the European Centre for Disease Prevention and Control, have been provisionally agreed by co-legislators and are being finalised before adoption.

The three institutions will now work together on the basis of today’s Declaration and the accompanying working document, which lists some 138 key legislative proposals.

Since 2016, the European Parliament, Commission and the Council have discussed and agreed on EU legislative priorities for the following year, in an annual Joint Declaration.

This enables the institutions to work more closely together on key legislative proposals brought forward by the Commission, and for which the Council and the Parliament are co-legislators.

In addition, last year, the three EU institutions signed the first Joint Conclusions for 2020-2024, which set out the common policy objectives and priorities until the next European elections.