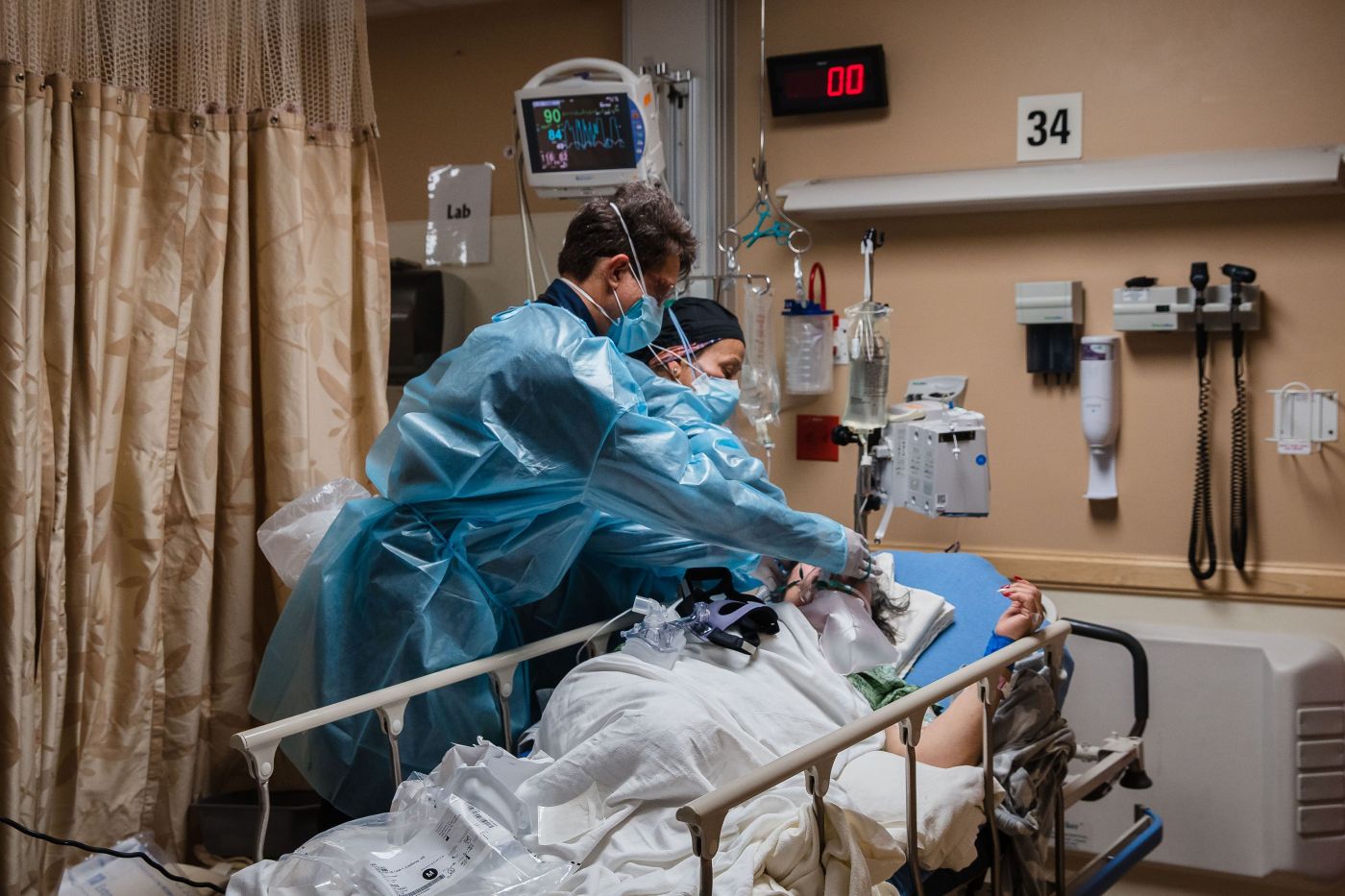 As it races around the world, the COVID-19 omicron variant shows tantalizing hints that it could morph into the ideal virus: highly transmissible, to be sure, but tamed by vaccines and milder than previous, sometimes deadly versions.

Yet the evolutionary arms race between humans and the virus is far from over, say biologists. This new relationship could get better — or suddenly worse.

“We’re still in the early days of the ‘getting to know you’ phase,” said Stanford microbiologist Dr. David Relman. “And it’s in this phase that things are the least predictable, the least well understood and the most dynamic.”

“The virus will continue to try lots of things,” he said, “because that’s how they succeed.”

If you’re a virus, your only goal is to make more of yourself. You don’t care how many people you kill — or merely inconvenience with a mild case of the sniffles. There’s no advantage, or disadvantage, to causing long COVID.

In the early days of the pandemic, what mattered to the virus was quick transmission. But now it faces a different landscape. We’re adapting, and soon nearly all of us will have protective antibodies from either vaccines or infections.

“The virus is having to learn to navigate a different immune environment than it did in the beginning,” said Jeremy Kamil, a virologist at Louisiana State University Health Sciences Center Shreveport, who studies variant mutations. “We are well equipped to fight these things off. But time and time again, the viruses come up with countermeasures.”

Omicron triumphed over delta — another fast-spreading and most prevalent variant — because it spreads so quickly. While delta settles in the lungs, omicron favors the upper airways, where it can spew out copies of itself while we talk and breathe. Its incubation period is only three days, compared to 4.3 days for delta and five days for other variants. It also is more likely than other variants to be asymptomatic; rather than lying in bed, infected people tend to feel fine or only slightly ill, and spread it.

“One of the primary selective pressures on the virus for the last two years has been: ‘How do I get into as many people as quickly as possible?’ ” said Dr. Patrick Ayscue, an applied epidemiologist at San Francisco’s Chan Zuckerberg Biohub. ” ‘I could hop into anybody and have a great time.’ ”

Luckily for humans, an omicron infection has meant less severe disease. Two new studies show that omicron doesn’t grab onto lung cells as tightly or quickly, and so is less likely to cause pneumonia. Instead, it prefers airways called the bronchus.

In its early days, this strategy worked for the variant, and it ran rampant. But that’s beginning to change now — and will force the virus to try to modify its approach.

That’s because we’re changing, too. In most parts of the world, the majority of the population has been infected or had some form of vaccination, and has some immunity.

In the U.S., experts predict that we’ll see a precipitous decline in omicron cases starting the third or fourth week in January, if we follow trends seen in South Africa, Denmark and the United Kingdom. By mid-February, omicron will recede. But that isn’t necessarily cause to celebrate.

“Omicron will run out of people to infect,” said Ayscue. “That can give the opportunity for something else to come in.”

When might that happen? Change could come gradually, through an accumulation of mutations. Or it could happen suddenly, as we saw in omicron. A dramatic genetic shift is most likely if the virus grows in an immunocompromised person, in wildlife, or if two variants combine and create a super-hybrid.

There are several worrisome possibilities.

The COVID-19 virus might seek to become more stealthy, like tuberculosis or HIV, with a longer “silent” phase of infection, noted Kamil and Relman.

Or it could become even more transmissible, like measles, noted Read. A virus that causes severe coughing will spread quickly — and while it would spare those who are protected, it could be deadly to anyone who lacks antibodies.

Could the next variant be more deadly? That’s happened with other viruses. For example, a herpes virus that afflicts chickens, called Marek’s disease, has been growing more severe since the 1970s, he said. And a deadly virus used to control rabbit populations in Australia turned mild, over time — but now, in a surprise twist, it’s killing again.

“If another variant arises that’s transmissible and a little bit better able to infect the lungs, then we’ll be back to where we were with the delta variant,” said Dr. Stanley Perlman, professor of microbiology and immunology at the University of Iowa. But that’s not inevitable; from the virus’s perspective, it doesn’t care if we live or die.

The next winning variant will be the one that is most agile at dodging our immune defenses, agreed experts.

But it will face a smart human immune system that is also adaptable, and better trained to defend itself. And there are parts of the immune response, such as virus-killing T cells, that would target all variants, said Bette Korber of Los Alamos National Laboratory, who tracks the evolution of the COVID-19 virus.

As we learn to live with the virus, “we’re building our repertoire against a breadth of variants. So we’re making it harder for the virus to find ways to evade,” said Ayscue. While the virus can adapt, “it‘ll probably be less and less effective at doing so,” so infected people will have milder cases.

Significantly, there are only a limited number of genetic changes the virus can make, added Perlman. “It’s like a key in the lock,” he said. “There’s only so much you can change the key to still stay in the lock. It’s not infinite.”

The virus might slowly turn into a common cold-causing virus, Korber predicted. “Fewer of us will get really sick, and fewer will die, as many of us now have some immunity and our bodies are armed to fight back.”

“But it is very hard to define what ‘slow’ means, and to predict its evolutionary trajectory, even over the next year or so,” she said. “It may be a bumpy ride.”