With Christmas just two days away now, children around the world will eagerly be keeping their eyes to the skies in the hopes of seeing Santa on his travels.

Parents will be delighted to hear that ‘Santa’ – in the form of the International Space Station (ISS) – will be visible from the UK this Christmas Eve.

NASA says the spacecraft will be the ‘third brightest object in the sky and easy to spot if you know when to look up’.

And, while it’s not the man in red, the ISS may make a good alternative for the big and small kids who will be looking out for him.

With Christmas just two days away now, children around the world will eagerly be keeping their eyes to the skies in the hopes of seeing Santa on his travels 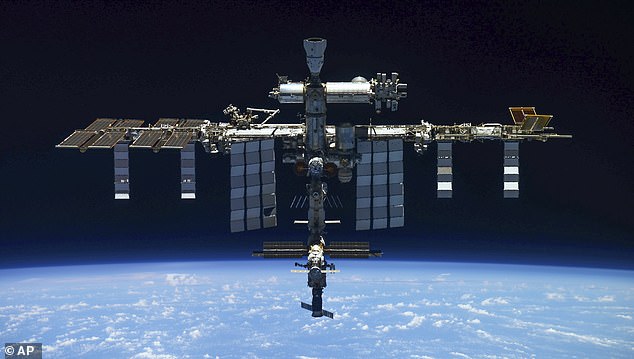 WHEN WILL I BE ABLE TO SEE THE ISS?

All times in GMT

The ISS speeds around the Earth at 17,000 miles per hour, orbiting 250 miles above the surface.

For most of the UK, it should be visible on Christmas Eve for one minute at 04:51 GMT in the east by south east just above the horizon, and five minutes at 06:23 GMT, slightly higher in the sky in the west by south west.

On Christmas morning, the station will pass over again, this time for three minutes at 05:37 GMT, and for seven minutes at 07:11 GMT.

It will be moving in an easterly direction during each sighting opportunity.

For the best view of the ISS you’ll need to find a dark sky area, with minimal to no light pollution, according to NASA, who said it is the ‘third brightest object.’

‘Visible to the naked eye, it looks like a fast-moving plane only much higher and travelling thousands of miles an hour faster!,’ NASA said.

You’ll also be able to distinguish the ISS from a plane by the fact it doesn’t have blinking lights.

For those on the ISS, they create their own ‘space family traditions’ and could do so 16 times on December 25, as the station orbits the Earth every 90 minutes.

Last year, they celebrated with a turkey dinner and presents, which were delivered by a SpaceX Dragon cargo ship.

NASA isn’t the only government agency getting in on the Santa tracking task.

NORAD, the North American Aerospace Defense Command, a bi-national agency run by Canada and the US, is also monitoring the path of the jolly gift giver.

For over 60 years, NORAD and its predecessor, the Continental Air Defense Command (CONAD) have tracked Santa’s flight on Christmas Eve.

They begin the tracking at midnight on December 23, and keep users up to date with where he would be expected to be at any given moment in time, during his mission to bring toys to the children of the world.

The news comes shortly after scientists calculated Santa’s carbon footprint as only 20,000 tonnes of CO2 emissions, taking into account the elves manufacturing the gifts, heating the cabin and sleigh journey.

That’s the equivalent of 0.5 per cent of the worst estimates for the carbon footprint of the FIFA World Cup in Qatar.

The team at Purdue University found that his journey around the world would release just 10g of carbon per child – the equivalent to one scoop of ice cream. 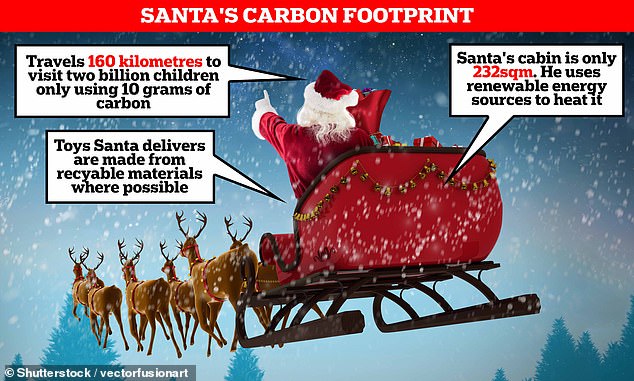 Research has shown that elves manufacturing gifts for Santa, the heating of Santa’s cabin and then his sleigh journey, only amounts to 20,000 tCo2e – equivalent to 0.5 per cent of the worst estimates for the carbon footprint of the FIFA World Cup in Qatar

If you enjoyed this article…

Find out how Rudolph the Red Nosed Reindeer, The Grinch That Stole Christmas, and A Christmas Carol just MIGHT be possible, according to science.

Scientists have also revealed why we love Christmas films so much, and always come back to ones we’ve seen a hundred times before.

And reviewers have found that you might be able to cook your Christmas dinner in an air fryer, plus they are up to three times cheaper than an oven to run.

The International Space Station (ISS) is a $100 billion (£80 billion) science and engineering laboratory that orbits 250 miles (400 km) above Earth.

It has been permanently staffed by rotating crews of astronauts and cosmonauts since November 2000.

Crews have come mainly from the US and Russia, but the Japanese space agency JAXA and European space agency ESA have also sent astronauts.

Research conducted aboard the ISS often requires one or more of the unusual conditions present in low Earth orbit, such as low-gravity or oxygen.

The US space agency, NASA, spends about $3 billion (£2.4 billion) a year on the space station program, with the remaining funding coming from international partners, including Europe, Russia and Japan.

So far 244 individuals from 19 countries have visited the station, and among them eight private citizens who spent up to $50 million for their visit.

There is an ongoing debate about the future of the station beyond 2025, when it is thought some of the original structure will reach ‘end of life’.

Russia, a major partner in the station, plans to launch its own orbital platform around then, with Axiom Space, a private firm, planning to send its own modules for purely commercial use to the station at the same time.

NASA, ESA, JAXA and the Canadian Space Agency (CSA) are working together to build a space station in orbit around the moon, and Russia and China are working on a similar project, that would also include a base on the surface.

Read More »
PrevPreviousCommon cold or Covid-19? How to cope if you catch virus in Christmas season | Health News
NextVice President calls on Local Authorities y to pass by-laws which will introduce penalties for people who buy products on the streetsNext