If we have to wear masks to help stop the spread of Covid, can we at least get ones that work?

Nobody in their right mind really wants to wear a mask. I know I don’t.

Don’t get me wrong, I don’t feel suffocated or dehumanised or particularly put-upon having to. I often forget I’ve got one on. It’s just a bit of a faff and I’d rather not.

But simple etiquette aside, in many places we have to wear them by law or face a fine. And in many others we’re simply asked to, so of course I do. Most of us do.

Even after mask mandates were dropped in July last year (they were reintroduced in December, when Omicron hit), more than half of Britons still wore them in many situations, out of choice.

Was it necessary? Well, in January 2021, at the peak of our second wave, one in 50 people had Covid. Numbers fell and rose again, and by October it was one in 50 again, across the whole of England.

Numbers were higher in certain hotspots. It’s now one in 25 in England, which is a startling figure.

The chances of coming into close contact with someone carrying the virus while going about your day was high back then, and now it’s pretty much inevitable. 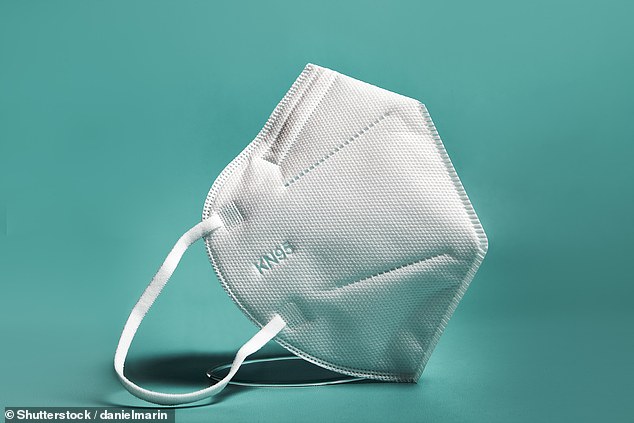 BARNEY CALMAN: Some types of mask are vastly superior – namely, FFP2 masks (pictured), the ones that look like a beak. But, unfortunately, they’re not the kind most people are wearing

So wearing a mask, which has been shown to help reduce transmission, makes sense in certain situations.

Which leads us on to the thorny, and surprisingly complex, subject: ‘Do masks actually work or not?’

The short answer is yes, they do. Masks can block viral particles coming in and out.

It’s been shown in many studies now and to argue otherwise is to wilfully ignore the evidence.

But, there are those – generally not people I’d go to for medical or scientific advice, perhaps – who say they don’t.

I recently saw a truly surreal clip on YouTube, in which Covid denier Piers Corbyn, brother of ex-Labour leader Jeremy, and a rag-tag bunch of followers were singing ‘Wearing a mask is like trying to keep a fart in your trousers’, over and over, while walking (maskless) through a London Tube train.

Of course, they’re quite mad. But I can see how, in theory, this might seem like a fair (if slightly infantile) thought: if Covid is like smoke, coming out of our mouths and noses, what’s a flimsy bit of fabric going to do to stop it?

And, actually, the doubters have a point. Some types of mask are vastly superior – namely, FFP2 masks, the ones that look like a beak. But, unfortunately, they’re not the kind most people are wearing.

The problem is, the differences and relative benefits have just not been made clear by our health chiefs.

In all honesty, until recently – after a holiday in the south of Germany, where people are required by law to wear FFP2 masks – I didn’t know how stark the differences were, either. 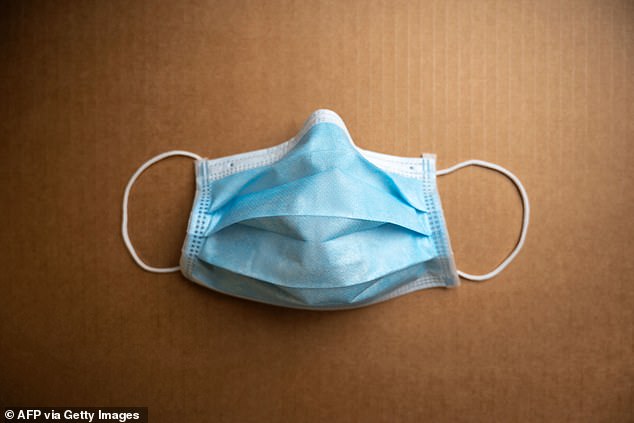 BARNEY CALMAN: A typical cloth mask provides only about 30 to 60 per cent protection to the wearer, according to research. Surgical masks (pictured) – those blue pleated ones commonly worn in the UK – while better, at 40 to 80 per cent, lack a tight fit to the face

Back in April 2020 – what feels like a lifetime ago – The Mail on Sunday was the first mainstream newspaper to suggest mask-wearing might be a good idea.

At the time, officials were claiming the public didn’t need to.

Chief Medical Officer Chris Whitty had said: ‘Wearing a mask if you don’t have an infection reduces the risk almost not at all. So we do not advise that.’

Instead, guidance revolved around washing our hands while singing Happy Birthday.

When Covid hit, there was the idea that it could be picked up from surfaces.

Someone infected could cough or sneeze and spray virus-laden droplets on to surfaces.

Transmission occurred when we came into contact with them. An NHS ad depicted the virus as dayglo paint smeared over door handles and a coffee cup. If this were true (it’s not, we now know), then hand-washing would be prudent.

What do you think about masks?

We want to hear your story.

Get in touch by email at [email protected]

There was also justifiable concern that, should everyone rush out to purchase medical masks, there wouldn’t be any for doctors and nurses.

PPE was in dangerously short supply as it was, back then. What changed? Firstly, it became apparent that Covid was spread through people who were infected but didn’t know they had it.

If everyone started wearing masks, scientists knew it would be an effective way of reducing this sort of transmission.

The Mail on Sunday’s GP columnist Dr Ellie Cannon was so concerned that she broke ranks to suggest that people shouldn’t wait for guidance, but should just wear one.

She even gave a method for making a mask from a cut-up and folded T-shirt, which the US Surgeon General was recommending. Ellie was later invited by the Government to help promote mask-wearing when it was finally mandated in July that year.

Since then, we’ve learnt even more – namely, while better than nothing, cloth face masks are not a great option.

They’re are moderately effective at capturing particles coming out of your own mouth – in science lingo, it’s called ‘source control’.

So they do help a bit. But they offer little ‘respiratory protection’ to the wearer.

Covid isn’t mainly spread by droplets but through particles in the air, and this is why the fit and quality of a mask is vital when it comes to stopping the virus getting in.

A typical cloth mask provides only about 30 to 60 per cent protection to the wearer, according to research. 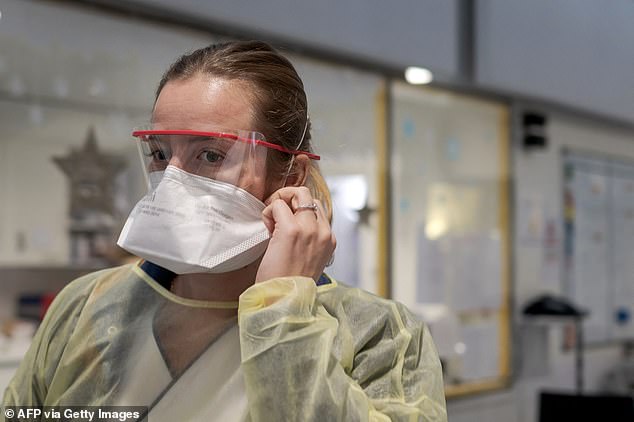 A health worker adjusts her FFP2 mask prior to entering the intensive care unit for patients infected with Covid-19 at the Pourtales hospital in Neuchatel, western Switzerland, on December 21, 2021

Surgical masks – those blue pleated ones commonly worn in the UK – while better, at 40 to 80 per cent, lack a tight fit to the face.

This results in large amounts of leakage around the mask. But FFP2 (FFP stands for ‘filtering face piece’) masks are much, much better. These high-performance masks are made of several layers of extremely dense fabrics that can filter out the tiniest viral particles.

That’s why they provide between five and ten times the respiratory protection than that of a cloth mask, while also providing significant protection to others.

This has been proven in aerosol lab studies, in which they shoot blasts of gas through masks and measure how well they filter out microscopic particles.

There are real-life examples, too. As we reported last week, a University of Cambridge study published in July suggested FFP3 masks provided ‘most likely 100 per cent protection against infection on wards’.

Study author Chris Illingworth, an infectious diseases expert, wrote: ‘Once FFP3 masks were introduced, the number of cases attributed to exposure on Covid-19 wards dropped – in fact, our model suggests FFP3 [masks] may have cut ward-based infection to zero.’

As an aside, experts warn against masks with a circular filter on the side. These are designed to let your breath out unfiltered, so don’t protect those around you.

Alongside Germany, Austria and Italy also require FFP2 masks as a minimum, by law, in public now.

But our mask mandate isn’t specific. The Government website still says face coverings can be ‘made of a material that you find comfortable and breathable, such as cotton’.

FFP2 masks are more expensive – roughly £1 per mask, versus 50p per surgical mask.

But since we’re all talking about the economic impact of people catching Covid and having to isolate, perhaps policymakers and businesses need to bite the bullet and give us masks that will really help remedy the problem.

It comes down to this: if we’re going to wear masks, can we at least have ones that really work? Ones that not only stop us giving someone Covid, but prevent us from getting it too.

Read More »
PrevPreviousWhen and how much cough syrup should be prescribed to children?
NextBenjamin Bernheim stuns at the Salzburg Festival with an intimate recitalNext