The controversial show judge claims that they are “out to pasture” and he branded the BBC One series “not a real competition”.

The extraordinary outburst from the 55-year-old risks upsetting the award-winning programme’s high-profile ballroom stars, such as Katya Jones and Giovanni Pernice.

And it will likely cause a major stir backstage at the studios in Elstree, Herts, where pros and their celeb partners took to the stage last night for the second live show of the 18th series.

During an online video chat about his career, Craig said: “With Strictly Come Dancing, I’m judging a television show, it’s not a real [dance] competition.

“It’s celebrities trying to dance with professionals, who have danced all their lives.

“They’re out to pasture. They’re no longer good enough to compete. They have to go through that process, then you go on to Strictly and pass your valuable information on to your partner.”

He went on to brand his involvement with the show as just “a Saturday job”.

It is not the first time Craig has taken aim at the Beeb’s hit show, where he is understood to take home £180,000 a series.

During a book tour two years ago, the Aussie choreographer blasted host Tess Daly, 51, claiming that she was “dull”.

He also alleged the boobs of head judge Shirley Ballas, 60, were fake — and advised cheating couple Seann Walsh, 34, and Katya Jones, 31 to “get a room”.

Craig went on to say about Shirley: “I showed my book to the BBC and they cut one part about Shirley’s breasts.

“I don’t know if you want to hear it . . . she came to the audition and literally had her thing open to her navel.”

And in a reference to the French dance troupe who have giant inflatable breasts, he added: “I am not joking. Her boobs were like La BaZooKa things hanging out.

“It was not very, erm, Strictly. So they came in and sewed all that up. Then they had to push them down. And they’re fake.”

He was also forced to make a public apology last year after suggesting celebs should sleep with their pro partners like 2018 winner Stacey Dooley, 33, while the BBC presenter was sat in the audience.

Stacey split from boyfriend Sam Tucknott shortly after winning the competition and went on to announce her relationship with pro partner Kevin Clifton, 38.

Craig admitted he had a made a “huge error” and regretted his “hurtful jibe” made during filming.

In a recent interview, he also predicted the infamous Strictly curse would “intensify” under the show’s tough Covid-19 conditions.

He said: “I think it’s going to be more intense, isn’t it? Because they are in a lockdown situation with each other.”

And he added: “I always think of it as the Strictly blessing. Look how many marriages we’ve had out of it.”

Former Home Secretary Jacqui Smith, 57, is favourite to leave the competition tonight with bookies offering odds of 4-7 for her to go with partner Anton Du Beke.

Meanwhile, former dancer Shirley has spoken of her battle over the years with her weight.

STORM IN A DD CUP

The Liverpudlian said: “I have struggled. Even now, I look on the TV screen and I see every bump and say, ‘Well, you are still about 6lb overweight. Cut a sugar out of your coffee this morning’.”

Shirley revealed how her family would taunt her as a child over the amount she ate.

She added: “My dad’s half-sisters all weighed 300lb and it was said to me, ‘If you keep eating like that, you are going to look exactly like them’.”

Cantwell: I was just so nerVY 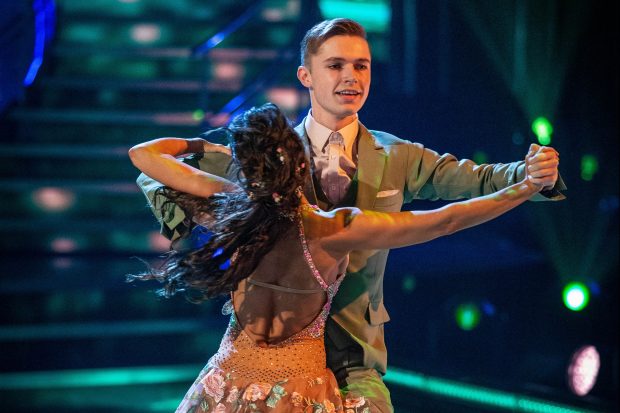 YOUTUBE star HRVY has told how he battled nerves ahead of his dazzling Strictly debut.

HRVY, 21, pleaded in vain with producers not to make him perform last with his dance partner Janette Manrara, 36.

He said: “I didn’t want to be last. I’ll never get over nerves when I have to perform.

“I think the live shows took me by surprise.

“I’ve done live things before but for some reason — when you see the red light on the camera and you’re dancing — it feels completely different.”

The star, real name Harvey Cantwell, reckoned others smashed their performances. But he delivered a jive meeting with unanimous approval.

Judge Motsi Mabuse, 39 — hailed it “the best first dance ever”.

We look at the possible pandemic fallout resulting from holiday travel in the U.S., how

More than 60 people arrested at anti-lockdown protest in London

A medical worker talks to a person waiting in line at a Covid-19 testing station in Seoul, South Korea, on...
Read More