Since 2000, at least one player every year has captured multiple World Series of Poker bracelets in a single year.

This trend has continued at the 2016 WSOP, as three players have already won twice. One player in particular already had a WSOP bracelet win prior to his double feat in 2016 and, more impressively, he won his two events in a span of less than one week, with a final table wedged in between his first and second win.

This player, who is in his twenties, narrowly missed out on capturing three bracelets in a single WSOP — a rare trifecta that’s only been achieved six times; Phil Hellmuth and Ted Forrest both did it in 1993, and they’re joined by Puggy Pearson (1973), Phil Ivey (2002), Jeffrey Lisandro (2009) and George Danzer (2014).

While many may believe I am discussing five-time WSOP bracelet winner and poker superstar Jason Mercier — and those qualifications do apply to him too — I am instead referring to a young Brit named Benny Glaser.

The 27-year-old from Southampton, England began the summer with a 12th place finish in the $1,500 no-limit 2-7 single-draw Lowball event, and made a final table appearance a few days later in the $10,000 Championship edition of that same game, finishing in fifth place.

Shortly thereafter, Glaser embarked on a six-day Omaha high-low Split-8 or Better run for the ages. It started when he captured his second career bracelet in the $1,500 event, besting 932 other entrants in a relatively smooth run to victory. After this win, he put on yet another impressive showing; this time, Glaser rode a roller coaster ride against a field of 163 players in the $10,000 version, once again coming out on top to grab his third bracelet (and second of the summer).

“It was incredible. The back-to-back made it all the more crazy,” exclaimed Glaser. “It felt nuts.”

So far this summer, Glaser has cashed six times, earning over $720,000 in the process. As a kid growing up in the U.K., he never could have imagined a summer like this.

As a youngster, Glaser loved playing strategic games such as backgammon, chess and logic games, as they challenged him intellectually, which served a precursor to his current passion — poker. When Glaser was around 14 years old, his dad, who often played online, introduced him to the game.

“He never really spoke much about poker, but watching my dad playing online interested me,” recalled Glaser. “I became interested in the intellectual aspect of the game.”

Playing for play money, the Southampton native played online — primarily hold ’em, — on and off until he was 19-years-old. During this time, he became more intrigued by the game of poker as he watched it on television — and his favorite player was World Poker Tour legend Gus Hansen.

“I used to watch WPT shows. It for sure interested me, but the dream was not specifically to get on TV,” said Glaser, “But it was to play against the pros and be a part of it. My favorite player growing up was Gus Hansen. At the time, he was both very good and very charismatic. He was a good, interesting personality as well. He just made the game look cool.”

When Glaser was around 20 years old, he saw a friend making a lot of money playing poker online, and this inspired him to take the game more seriously. This same friend also recommended the 2+2 poker forums.

At the age of 21, the Englishman began trying his hand at games other than hold ’em. He first became interested in pot-limit Omaha high-low, and once again, the inspiration came from his father.

“Back when I was 21 or so, my dad started playing PLO 8 and that also interested me,” said Glaser. “I thought I’d try it, and I realized both I was pretty good at it and simultaneously everyone else was terrible. That was pretty profitable for me.” 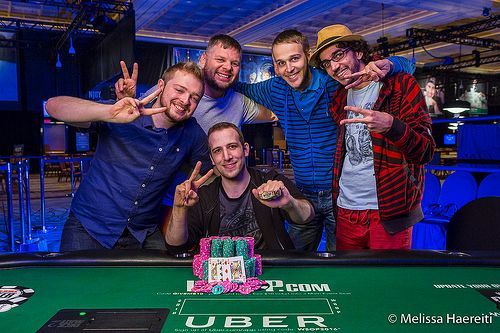 Melissa Haereiti / WSOP
Benny Glaser sat at two career WSOP bracelets for only a few days, before adding a third in short order.

Later, his aforementioned friend also suggested that he play on bigger sites such as Full Tilt. There, Glaser discovered other games and decided to focus primarily on mixed games, realizing he had such a huge relative advantage over the average player. Today, he considers himself a mixed game specialist, in both cash games and tournaments.

“The limit mixed games are generally rarer. They are played less than no-limit so often people are just less experienced and generally the overall fields are weaker,” said Glaser. “So, I feel I have a big advantage especially if it is a mixed eight-game. Then, it is pretty tough to find people who are very good at all eight games. Most people, at least in one of two of the games, not going to be very good.

“Also, I just find them legitimately more interesting than no-limit hold’em,” he continued. “They are fun especially when it is a mix of games. Mixed games can also get you to think differently, take you outside of your comfort zone, and help you think outside the box.”

When he was 23, Glaser decided to put significant hours into playing the game and improving himself, committing to making it his primary occupation. He began talking with fellow poker pros about hands and situations, while working very hard at every game.

“I tried to be very well-rounded. I’ve worked on every individual game very hard. I always said that I had three best games, O[maha] 8, 2-7 [triple draw] and limit hold ’em.”

After studying and practicing for a significant period of time, Glaser decided to make his first foray to the WSOP in 2014. After playing in 20-to-25 bracelet events, he came away completely empty-handed, and Glaser left Las Vegas very disappointed.

This initial setback didn’t dissuade Glaser from taking another shot, as he returned to England to continue working hard on his game. He played diligently online, and prepared himself to take another run at a bracelet at the 2015 WSOP. This time, Glaser returned with a vengeance, winning that WSOP bracelet against a very tough final table, which just so happened to be in one of his best games — $1,500 2-7 triple draw lowball.

“It was kind of a shock, as it was far and away my biggest win ever.”

Entering the 2016 WSOP, Glaser had high hopes and expectations of himself. He even had the confidence to choose himself in a variety of poker fantasy drafts he participated — including the famed $25k Fantasy Draft. Surprisingly, Glaser went for a hefty $30 in the draft, prompting some to question this unexpected pick. Of course, these pundits are eating their words now.

“Even after winning a bracelet, I was constantly studying, improving my game. Coming into this summer, I felt good and was ready to go. I had a great SCOOP, as I won one of the $2K’s, and final tabled two other $2K’s. I also picked myself in the fantasy draft, as I knew I was going to play a full schedule.”

While Glaser had high hopes for this summer, he definitely never expected a summer like this. “Obviously, this surpassed my expectations,” said Glaser. “I thought it was maybe possible, but you still don’t think it could happen. It’s pretty much a dream.”

“Benny is a very, very solid player who has studied very hard and put the work in by playing infinite hands of Omaha 8, 2-7 triple draw and all of the other games online,” stated fellow Englishman Adam Owen, who has two WSOP final table appearances to his own credit. “Benny knows every spot in Omaha 8 unbelievably well, it’s kind of scary. He understands tournament adjustments very well and we talk about poker pretty frequently.”

Also, the “other” two-WSOP-bracelets-in-one-week-club member has also taken notice, at the two final tables at which they battled this summer, where each walked away with one of the bracelets.

“Anyone who can win back-to-back Omaha 8 limit events has got to be doing something right,” affirmed Jason Mercier. “Having played a lot with Benny over the last few weeks, he’s definitely a very solid tournament player in all variants.”

Looking ahead toward the final few weeks of the WSOP, Glaser realizes he is in contention for WSOP Player of the Year, but he isn’t going out of his way to change his schedule to chase that title.

“It’s definitely a possibility, but it’s not such a big goal for me and I’m not changing my schedule drastically,” said Glaser. “I was already planning to play a massive schedule, [and] the only event I would be doing different is playing the $50K (Poker Player’s Championship).”

As Glaser looks forward to his bright future, he has one simple goal after working so hard for the past several years.

As a three-time WSOP bracelet winner before the age of 30, Benny Glaser is definitely well on his way to achieving this goal.

Mike Tyson vs Roy Jones Jr predictions: From David Haye to Evander Holyfield
Leeds 'enter the race to sign Barcelona midfielder Puig in January' after being exiled by Koeman
There's nothing special for me about going back to Chelsea, says Tottenham boss Jose Mourinho
A Christmas TV advert like no other... can you guess which footballer has swapped goals for guitars?
Mike Tyson comes in ten pounds lighter than Roy Jones Jr as they stare-off before Saturday's fight
Wayne Rooney to retire as player if Derby make him full-time manager
PrevPreviousCan’t visit the dentist? Here’s how to take better care of your teeth | Life and style
Next‘Green’ LGBTQ mural created with ‘polution-eating’ paint unveiled in RomeNext

Child: Welcome to my Mommy’s podcast. This podcast is sponsored by Jigsaw Health, my source

What I Learned Wearing a Continuous Glucose Monitor

Table of Contents[Hide][Show] I’ve learned over and over that health and wellness is increasingly personalized!

A quick poll in the Who What Wear UK office confirmed what I suspected: Most

Zac Efron and His Girlfriend Vanessa Valladares Have Broken Up

Zac Efron and Vanessa Valladares have reportedly split after five months together, per The Sun.