There’s no evidence of Hollywood just yet. Only signs that the grass has been growing under Wrexham’s feet for far too long.

It started sprouting through the terracing on the club’s Kop in 2008, when they were relegated from the Football League, and that end of the ground was closed. Fans have not stood on the terrace since. There’s more foliage than concrete there now.

The arrival of actor-producer Ryan Reynolds and film producer Rob McElhenney could not have come soon enough.

The link back to sublime times on this football field — Mickey Thomas’s free kick against Arsenal in 1992; Jim Steel’s header to defeat Porto in the Cup-Winners’ Cup eight years earlier — is becoming fainter.

The man who bankrolled the club in those less complicated days, local businessman Pryce Griffiths, died only last week. Wrexham, now the longest-serving club in this division, were veering towards relegation to the sixth tier last spring, when the pandemic ended the season.

It’s hardly tinseltown as the Aldershot team bus pulls up. Unremitting rain rolls in from the Berwyn mountains and the sky is slate grey.

But Dave Jackson, a supporter with nothing more pressing to do than watch the vehicle, typifies the mood of local optimism. ‘They say we can go up through the leagues and we’ve got the stadium for it and the support for it,’ he says. 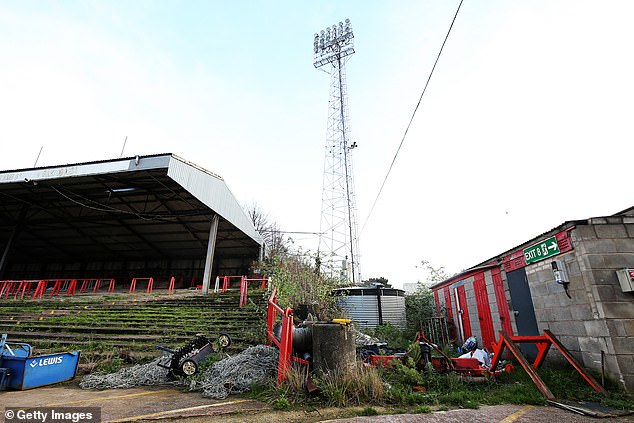 Legendary 1970s striker and club president Dixie McNeil echoes the sentiment in the half-time discussion during the live stream, when the notion of Wrexham in the Premier League crops up.

Of course, it’s not as simple as a couple of film impresarios laying out the £2million they have pledged to buy a bunch of players in January, or next summer. There are Financial Fair Play rules here.

Doing a Jack Walker or a Roman Abramovich is no longer allowed. Wage caps are on the way, too, as the lower leagues try to become viable in the post-pandemic era.

It cost Gary Neville and Co £2m just to get Salford into League Two. But the support base and infrastructure are bigger here and they’ve learned how to work on a budget.

Elliott Durrell, signed for nothing when out of contract at Altrincham in the summer, orchestrated Wrexham’s 1-0 win at Hartlepool last week and was equally impressive as they began to dominate Aldershot. 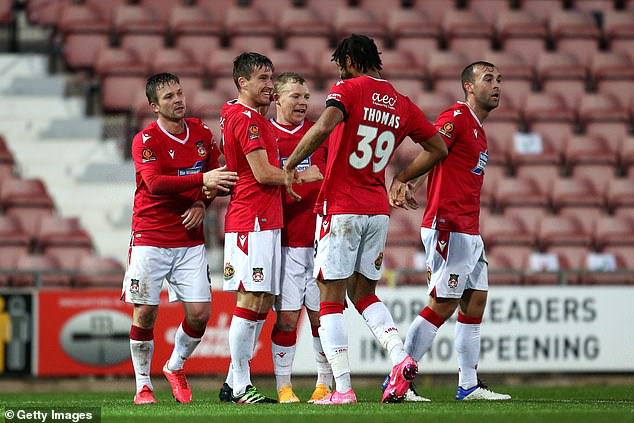 On Saturday, Wrexham marked the new era with a hard-fought 1-0 win over Aldershot

So was Luke Young, a specialist from long range, who by half-time had struck two clean efforts. The second, a free-kick, brought the best from keeper Brad James.

There’s certainly something to work with here and the focus would be better if the Americans install a chief executive — something the club have lacked under supporter ownership — to run things in their absence.

Peter Moore, who recently left the equivalent position at Liverpool, is seen as a candidate. He has run major commercial operations in the US for Reebok, Sega and EA Sports and has an authentic connection: he played for Wrexham Senior Schools on this pitch in the early 1970s and toured Germany in a squad with a young Joey Jones.

On Saturday, the going got tough against a physical Aldershot side who know all about financial need, having gone bust under a previous incarnation in 1992. It wasn’t pretty. Virtually every Aldershot advance entailed the ball dropping out of the sky. Mo Bettamer was particularly dangerous. But then Young proved the difference, allowing a low Jamie Reckord cross to run across him before he despatched it past James.

There’s something calculated about the moves the Hollywood pair are taking. A video last week promoting the club’s sponsors — a local trailer manufacturer — went viral: an impressive promotional strike for the Netflix-style series which will chart this adventure. You can’t buy the kind of publicity they have already reaped.

There’s an air of comedy about the enterprise which fans so far seem comfortable with. The Financial Times made the comparison with the Apple TV sitcom Ted Lasso, about a hapless American coach at a fictional English club, and inspired by a promotional video that went viral.

But now they’ve bought in, Reynolds and McElhenney seem invested. When a Wrexham fan with cerebral palsy announced he was trying to raise £6,000 for an adapted bath last week, McElhenney donated the full sum.

‘They keep telling me to temper my enthusiasm’, McElhenney tweeted as he related a final score which sent Wrexham up to 11th. ‘I respectfully decline.’

Immunotherapy is used in combination with other therapies like surgery, targeted therapy, chemotherapy, or radiation.

5 Tips for Washing and Detangling Curls and Coils

Runway images courtesy of Imaxtree. Design by Danielle Campbell. This is Texture Talk, a weekly

As for ingredients, you’ll want eye creams that include occlusives, humectants, emollients, and/or barrier ingredients.

“Absolutely, I said yes right on the spot”