Indonesia Bans Coal Exports to Head Off Blackouts – The Diplomat

The move speaks to the political and economic importance of coal, and the difficulty Indonesia will have in organizing a transition to renewable energy. 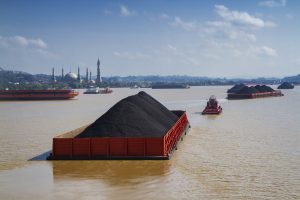 Coal is transported by barge on the Mahakam River in East Kalimantan, Indonesia.

Over the weekend, Indonesia’s government announced that it was banning coal exports for the month of January, after supplies at domestic power plants fell to critically low levels, raising the risk of widespread blackouts.

Despite being the world’s biggest exporter of thermal coal, having exported some 400 million tons in 2020, Ridwan Jamaludin, an official at the Ministry of Energy and Mineral Resources, announced that the government was prioritizing local power generation capacity.

“It’s beyond us and it’s temporary. If the ban isn’t enforced, almost 20 power plants with the power of 10,850 megawatts will be out,” Ridwan said in a statement, according to Reuters. “If strategic actions aren’t taken, there could be a widespread blackout.”

The announcement, which has been met with predictable opposition and grudging acquiescence from coal industry groups, reflects the prominent role that the Indonesian government plays in the country’s electricity sector. The state-owned utility Perusahaan Listrik Negara (PLN) maintains a complete monopoly on the transmission and distribution of power in Indonesia, as well as owning and operating 70 percent of Indonesia’s power generation capacity.

This week’s order was made under a special policy known as a Domestic Market Obligation (DMO), under which coal miners in Indonesia must supply 25 percent of annual production to the domestic market (most of which goes to PLN) at a maximum price of $70 per ton, well below current market prices.

This allows the Indonesian government to keep retail electricity prices low and insulate the public from swings in the global price of coal. Now, under the DMO, Indonesia’s energy ministry has mandated producers to prioritize supply to PLN in order to ensure sufficient supplies to keep the lights on.

The announcement reflects the continuing economic and political importance of coal power, which constitutes 60 percent of Indonesia’s energy and 35 percent of its carbon emissions, second only to deforestation, which poses a serious challenge to any rapid renewable energy transition. Ahead of the United Nations Climate Change Conference in Glasgow in November, the administration of President Joko Widodo pledged to stop commissioning new coal-fired power plants and phase out coal power generation by 2056.

But as James Guild noted in an article for the November issue of The Diplomat’s magazine (subscribe here), Indonesia’s uptake of renewable energy has been sluggish, despite its green ambitions. Around 87 percent of the electricity generated in 2020 came from coal, oil, or gas-fired power plants, compared to 12.7 percent from hydropower and geothermal, and a mere 0.3 percent from renewables like solar, wind, and biomass gasification.

This is perhaps unsurprising, given that the coal industry generated $38 billion in export earnings in the first seven months of 2021, to say nothing of the political benefits that Indonesian governments derive from being able to ensure a steady, low-cost supply of electricity.

“They control the supply, so they can control the price, and that is not something they will want to give up easily,” Guild wrote. “Any credible plan for jump-starting renewable energy in a country like Indonesia must grapple with these political and economic realities.”