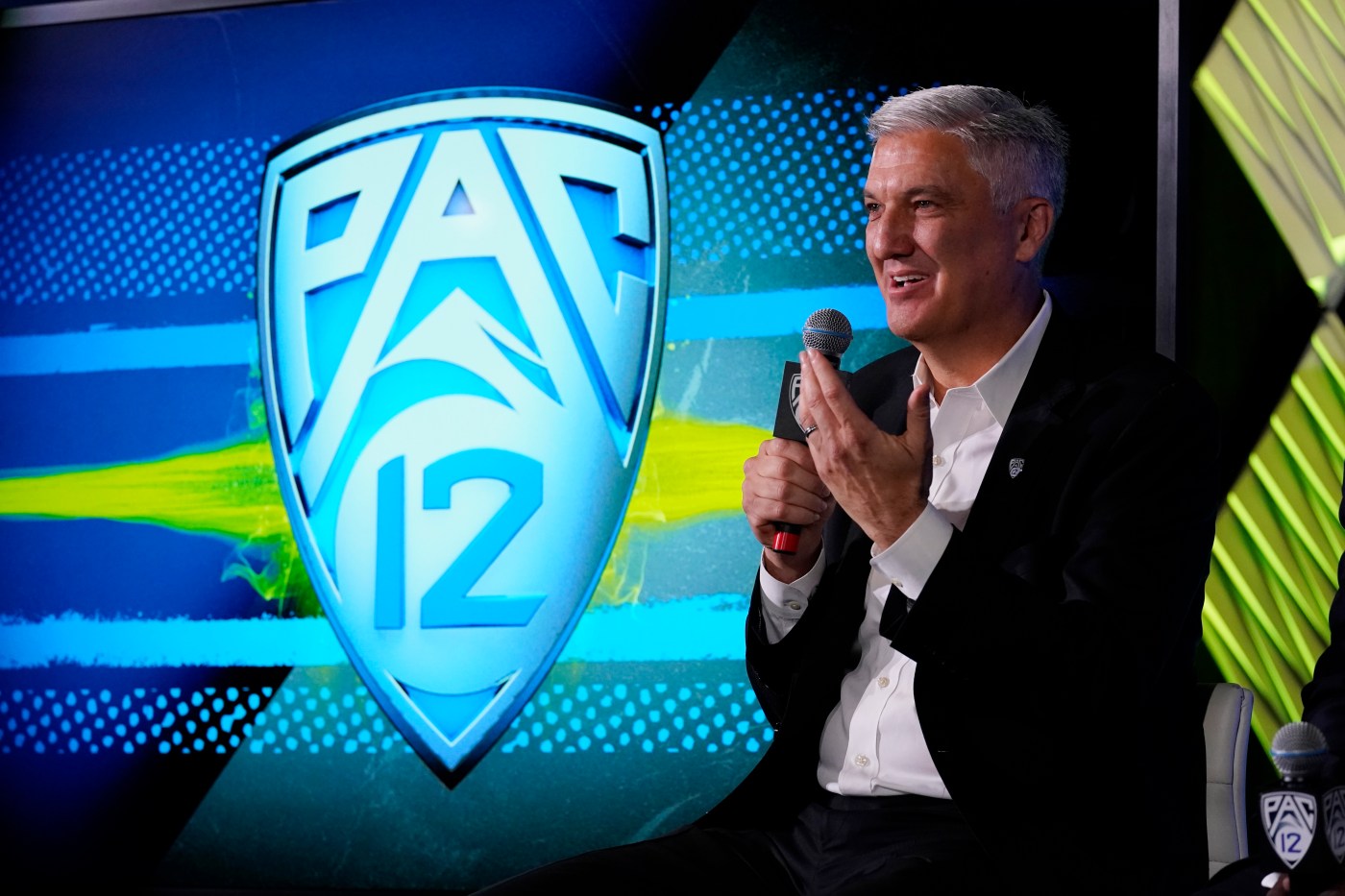 The top-paid strength coach in the Pac-12 was merely the 19th-highest paid in major college football.

Meanwhile, the biggest recruiting budget in the Pac-12 doesn’t crack the top 12 nationally, according to a published report.

The only thing easier to spot than Pac-12 bowl losses are examples of the conference not plowing as many resources into football infrastructure as its peers in the Power Five.

New commissioner George Kliavkoff hopes to change that state of affairs by making the case to the university presidents and chancellors that investing in football can provide returns that benefit not only cash-strapped athletic departments but entire campuses.

“Historically, I don’t think we’ve made a great case for the ROI of footbalI,’’ Kliavkoff told the Hotline.

“I’m not going to take the opportunity to speak to my 12 bosses without talking about it. It’s going to be a constant topic. They are going to get tired of hearing it from me.’’

If Kliavkoff succeeds in convincing the president to spend more on football, he will have altered an existence rooted in decades of reticence and frugality.

Over the years, Pac-12 presidents and chancellors have declined to devote as many resources as their peers to coaching salaries, recruiting budgets, facilities and other building blocks of football success.

In some cases, the presidents have spoken publicly — and with pride — about not participating in the so-called arms race across the Power Five.

Examples from the past few seasons (among public universities) are plentiful:

— Oregon spent $6 million on its coordinators and assistant coaches in 2021, according to USA Today. While that level of expenditure led the Pac-12, it was merely 10th nationally.

Joe Moorhead, the Ducks’ offensive coordinator, was the highest-paid staffer in the conference at $1.15 million — good for just 20th in the Football Bowl Subdivision.

(The only other Pac-12 coordinator/assistant at the million-dollar mark was Utah defensive playcaller Morgan Scalley.)

— Washington had the second-highest-paid coaching staff in the Pac-12 in 2021, with a salary pool of $4.9 million for assistants and coordinators, per USA Today.

— Many head coaches believe their most important staffer is the strength coach, because of the physical nature of the sport and the amount of offseason time players spend training.

Oregon’s Aaron Feld was the top-paid strength coach in the conference in 2021, at $420,000. That salary ranked 19th nationally.

— An analysis of 2019 recruiting budgets by AthleticDirectorU found the Pac-12 woefully behind in that category, as well.

Oregon spent $1.2 million in recruiting that year, followed by Utah at $1.1 million. Neither school cracked the top 14 nationally, and no other Pac-12 school spent more than $1 million.

Kliavkoff, who has been on the job for just six months, didn’t cite specifics. But he clearly grasps the connection between football investment and the potential returns across the university spectrum — financial returns, alumni engagement returns and, yes, educational returns.

“And we’ve seen that it leads to more applications, which allows universities to become more selective in admissions.

“I can’t imagine a more obvious ROI than investing in football.”

There are examples everywhere, some of them cited previously on the Hotline.

During its stellar run under Nick Saban, Alabama has experienced a quadrupling of the number of out-of-state students, according to USA Today, and a comparable rise in the academic profile of the incoming students.

Clemson reportedly experienced a near-doubling of applications for enrollment over the past decade.

But football ROI works at the sub-elite level, as well.

The National Bureau of Economic Research published a 2012 study on the topic by Michael Anderson, a professor of resource economics at Cal.

“The estimates imply that large increases in team performance can have economically significant effects, particularly in the area of athletic donations. Consider a school that improves its season wins by 5 games (the approximate difference between a 25th percentile season and a 75th percentile season).

Those are numbers Pac-12 presidents can understand.

“There are two paths to football success,’’ Kliavkoff said. “One is investment; the other is shortcuts.

“The Pac-12 isn’t going to take shortcuts. To me, the path is investment, and there’s a compelling case that we can do things without compromising our standards for education and culture.”

Kliavkoff first made his ROI pitch to the presidents in November, and he plans to revisit the topic when the Pac-12 CEO Group meets again in March.

Meanwhile, he has two examples of schools spending to win:

— USC signed Lincoln Riley to a contract believed to be worth in the $11 million range annually, making him the highest-paid coach in conference history by a significant amount.

— Earlier this week, Oregon approved the contract details for new defensive coordinator Tosh Lupoi, whose $1.7 million annual salary will likely rank in the top 10 nationally for the 2022 season.

Kliavkoff doesn’t intend to make his case to the presidents alone. He plans to lean on prominent football alumni at various universities.

“There is going to be a chorus of voices like never before,’’ he said.

“But I don’t think it’s pushing a rock uphill. Our presidents and chancellors understand. What they want to know is that we can do it without shortcuts or impinging on our educational and cultural integrity.”