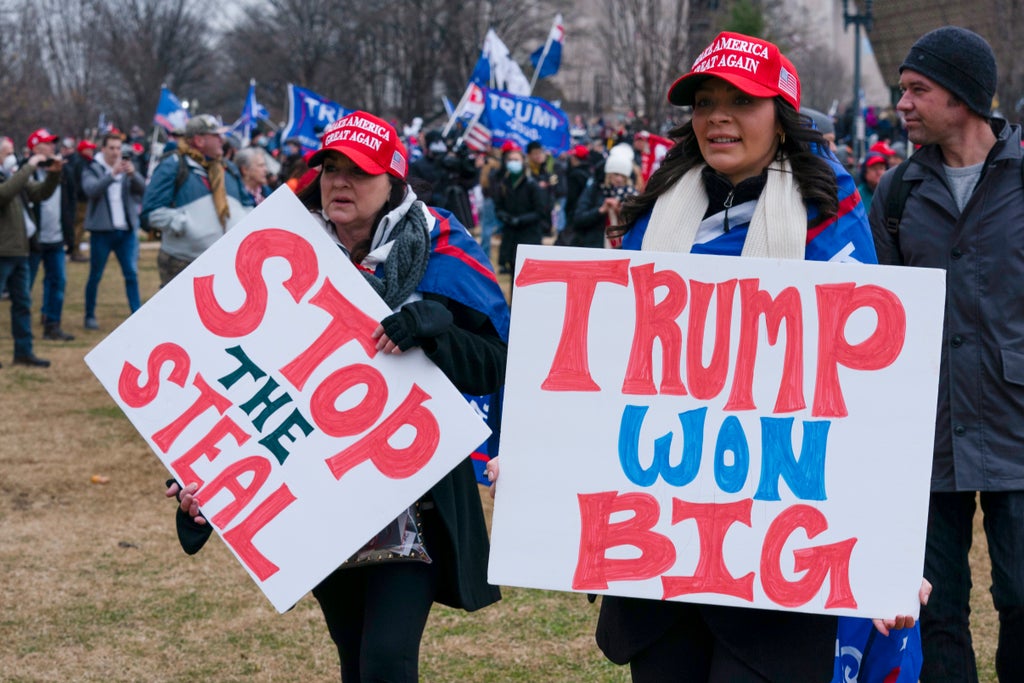 Donald Trump has canceled a press conference scheduled for 6 January at his Mar-a-Lago resort in Florida to coincide with the one-year anniversary of the attack on the Capitol mounted by his supporters, after his Republican allies openly chafed at the idea of relitigating false election claims.

President Joe Biden and Vice President Kamala Harris will lead a day of memorial events planned throughout Washington DC, including lawmakers sharing their experience of the assault and a candlelight vigil at the National Mall.

Documents recently published by the committee revealed how the former president’s allies planned a campaign to intimidate election officials and spread voter fraud falsehoods, while another appeared to call for the seizure of “evidence” in service of his false claims that propelled the attack and his spurious bid to overturn election results.

In recent weeks, the committee has accelerated its probe into the attack, fuelled by conspiracy theories that the 2020 presidential election was rigged, and a violent attempt to reject the votes of millions of Americans.

This week, in a letter asking for his cooperation in the probe, the committee published several text messages from Fox News personality Sean Hannity to then-White House chief of staff Mark Meadows in the days surrounding the attack.

“The politics of fear that the Democratic Party has been pushing on this country for a whole year now – it’s the only thing they have to offer the country,” he told Fox News host Tucker Carlson on Tuesday night. “And what they’re trying to do with it is consolidate their power.”

A year after the Capitol riots and violence which gripped the nation, Mr Carter writes that following a pro-Trump assault at the historical building, failed attempt to reject the 2020 presidential election, despite a “brief hope” that the violence would shock the nation’s consciousness into action, the false “stolen election” narrative that fuelled the attack is as present as ever.

“I now fear that what we have fought so hard to achieve globally – the right to free, fair elections, unhindered by strongman politicians who seek nothing more than to grow their own power – has become dangerously fragile at home,” he writes.

Alex Woodward reports on this here

On the Capitol rioters and the banality of extremism

More than 700 people have been charged with federal crimes and dozens of others are wanted by law enforcement for their role in the Captitol riots.

Headlines have been dominated by a few figures – the so-called QAnon Shaman, a Texas real estate agent who flew to Washington DC on a private plane, and cases involving far-right groups the Proud Boys and Oath Keepers militia.

But those cases may be obscuring an alarming fact about those who stormed the Capitol that day to halt the process of democracy:

“They are not interesting,” says Seamus Hughes, deputy director of the George Washington University’s Program on Extremism. “You’ve got construction workers and yoga instructors. They come from a cross-section of America.”

The Independent’s Richard Hall examines the state of extremism in the US:

US Rep Adam Kinzinger, one of two Republicans on the committee investigating the Capitol riot, will spend his post-congressional career combating right-wing extremism rather than run for governor or for Senate in Illinois, he announced.

Mr Kinzinger announced in October that he would not seek re-election after redistricting would have put him in a tough primary against fellow Republican Darin LaHood.

The congressman was one of 10 Republicans who voted to impeach Trump following the insurrection.

‘It’s gonna leave a scar’: Capitol Police and staffers reveal details of Jan 6 – and the trauma that remains

Law enforcement who fought to defend the Capitol on 6 January and civilian staff who laboured late into the night to allow Congress to complete its work are still struggling to comprehend what they saw, heard, and felt.

Over the last few weeks, The Independent’s Andrew Feinberg spoke with several staffers who lived and worked through the events of 6 January 2021. Their message was unified, loud and clear:

They are not OK, and they’re afraid what happened that day could happen again.

Trump: ‘I disagree with Sean’

After the House committee investigating the Capitol attack publicly released a letter to Sean Hannity that contained several text messages he sent to Mark Meadow on the days surrounding 6 January, Trump had this to say:

“I disagree with Sean on that statement and the facts are proving me right,” he told CNN reporter Kaitlan Collins through a spokesperson.

It was not immediately clear which part of the text Mr Trump disagreed with, or which “facts” he felt had vindicated him.

In an interview with The Associated Press on the eve of the one-year anniversary of the Capitol riots, House Speaker Nancy Pelosi reflected on the attack and the “enormous civic lesson” it left in its wake.

“I think now people are alerted to the fact that there can be rogue presidents,” she said.

Speaker Pelosi, who has led the impeachment of Donald Trump twice, said rioters were lied to, and manipulated by a then-president whose spurious bid to overturn the 2020 election through baseless legal challenges and false narratives fuelled the assault.

“They may have thought that was right,” she said. ”But they were lied to by the president of the United States.”

For that, she said, “he should be ashamed.”

“Make no mistake, our democracy was on the brink of catastrophe,” she said. “Democracy won that night … These people, because of the courageous work of the Capitol Police and Metropolitan Police and others, they were deterred in their action to stop the peaceful transfer of power. They lost.”

Josh Hawley’s career was supposed to be over after January 6; he’s thriving instead

When Senator Josh Hawley was pictured pumping his fist in support of rioters in front of the Capitol before they eventually breached the barricades and took part in a riot, he was seen as politically radioactive.

The Independent’s Eric Garcia on the survival of the first senator to announce his objection to the certification of Electoral College votes from the 2020 presidential election:

Jimmy Carter pens frank op-ed: ‘I fear for our democracy’

Former president Jimmy Carter, who co-founded the Carter Center, a democracy and human rights protection organisation, penned a sobering column for The New York Times in which he warns that a relentless and powerful disinformation campaign to sow distrust – and a rising tolerance for political violence – has left the nation teetering “on the brink of a widening abyss.”

“I now fear that what we have fought so hard to achieve globally – the right to free, fair elections, unhindered by strongman politicians who seek nothing more than to grow their own power – has become dangerously fragile at home,” he writes.

The former president outlined several steps to preserve American democracy, including a universal agreement on the “fundamental constitutional principles and norms of fairness, civility and respect for the rule of law,” as well as ballot access, a resistance to political polarisation, and the erasure of political violence and spread of disinformation.

Joe Biden and Kamala Harris will travel to Atlanta, Georgia to urge the passage of federal legislation to protect the right to vote “from corrupt attempts to strip law-abiding citizens of their fundamental freedoms and allow partisan state officials to undermine vote counting processes”, according to the White House.

The renewed push from the White House comes as Senate Majority Leader Chuck Schumer pledges to hold another vote on voting rights legislation – and to amend filibuster rules that the GOP has used to block it – on or before 17 January.