Kim Jong-un’s Daughter and the ICBM – The Diplomat

North Korea’s leader debuts his offspring, and sends a message.

The November 19 issue of Rodong Sinmun carried a surprise. The newspaper published photographs of North Korean leader Kim Jong-un hand-in-hand with his daughter, as they witnessed missile tests.

North Korean media had not even reported the fact that Kim Jong-un has children. There have been reports in South Korean media saying that Kim and his wife Ri Sol-ju have three children, but the only confirmation of a girl called Ju-ae came from Dennis Rodman, the former NBA star, who said that Kim personally had introduced his daughter when Rodman was invited to Pyongyang in 2013. The girl in the published photographs looks like she is around ten years old. Her name was not made public, but it is highly likely that she is Ju-ae.

The Rodong Sinmun article was reporting the successful test launch on November 18 of the Hwasong-17, a new type of intercontinental ballistic missile (ICBM), and is titled “WPK Solemnly Declares Its Immutable Will to React to Enemy’s Nuke and Full-Frontal Confrontation in Kind.” The uncompromising piece goes on to strongly criticize the United States and South Korea.

This hardline stance combined with photos that contrast father and daughter against the massive missile are surreal. North Korean missile launches have failed many times and there are risks associated with bringing family members to the test site. Nevertheless, Kim Jong-un “came out to the site for the historic major strategic weapon test-fire together with his beloved daughter and wife to personally guide the whole course of the test-fire.” It is important to note that Kim’s “beloved daughter” was given more attention than Ri Sol-ju, who is well-known for her role center-stage during the Pyongyang visits of Chinese President Xi Jinping and the former Korean President Moon Jae-in.

To date, no one has been able to affirm any tentative decision on a successor to Kim Jong-un, so it will be worth carefully watching to see if his daughter appears in North Korean media in the future.

However, it cannot be denied that the girl’s presence at the missile launch may be highly significant, given that the North Korean propaganda machine is already running claims that Kim Jong-un himself provided local guidance to military units when he was only 15 years old.

Kim was a student in Switzerland from 1996 to 2000, but this fact remains concealed from the people of North Korea. Perusing Rodong Sinmum for the day when Kim first provided guidance to a military unit, one finds reports of a visit by then leader Kim Jong-il to a naval unit. In short, we may assume that Kim Jong-un had temporarily returned home from school in Switzerland to accompany his father on official visits. This is still hailed as an important achievement for the younger Kim.

North Korea is a male-dominated society where women are frowned upon even for smoking a cigarette. Even so, it would not be especially surprising if the fourth-generation leader was a woman. As is evident from the unofficial appointment of Kim Jong-un as successor when he was in his early 20s, and the dying instructions of his father to appoint him Supreme Commander of the Armed Forces of North Korea at 27, the most important issue is to continue the Mangyongdae Family and the Baekdu lineage, which links back to Kim Il-sung and Kim Jong-il, as this represents the height of legitimacy. The issue of a successor is the sole prerogative of the supreme leader and there is no question of opposition by the inner circle, even less by the nation.

Kim Jong-un is only 38, and there are no suggestions of major issues with his health. Nevertheless, he is taking extra precautions to perpetuate the system. A good example is the new post of First Secretary of the Central Committee of the Workers’ Party of Korea as deputy to the General Secretary, which was established when the Constitution of the Korean Workers’ Party was revised in January 2021. This post remains unoccupied, but should something happen to the Supreme Leader, there are legal guarantees in place that would allow the advisors to the post to promptly appoint a deputy.

The Rodong Sinmun, which was the first media outlet to report the existence of Kim’s daughter, concludes the article with the “determination” to perpetuate the system and “to defend the Party and the revolution, the country and the people forever.” The Kim family is a symbol, and a reminder to the nation that weapons like the new type of ICBM are vital to protecting both the family and the nation.

North Korea’s logic has long asserted that nuclear missiles are needed to protect the system. Given its lack of a missile defense system, North Korea would be helpless in the face of an attack by the United States or South Korea. The logic has been for Pyongyang to ensure retaliatory capacity against its enemies, to act as a deterrent. By introducing his daughter, Kim Jong-un has informally sent a message, for both domestic and international consumption, saying that he wants to avoid war and unnecessary escalation.

Atsuhito Isozaki is a professor at Keio University. 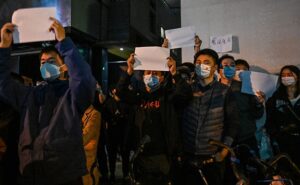