‘Letterboxd’ 101: All you need to know about the social media platform for film lovers

Taking a deep dive into the world of movies–be it as a hobby or profession– can seem intimidating at first. With a surface-level knowledge in films, you might have no idea of a good starting point or essentially, what qualities to consider. Educating yourself on the subject might appear like a mammoth task, taking into account the neverending layers of junk available across the internet on one end, and a group of cinephiles recommending ‘French New Wave’ cinema on the other.

Enter Letterboxd – a free social media platform for film enthusiasts of all kinds. Created by Karl von Randow and Matthew Buchanan in 2011, the app offers a simplistic, yet fun approach to whatever IMDb does, while creating a social interaction system. Members can use it as a means to discover new films, keep track of the ones they have seen, or even share their opinions via public reviews and others can comment on the same.

The website has recently seen a steady surge in popularity, partly due to the pandemic-induced lockdown conditions, forcing people to delve into movies and other forms of entertainment. Here’s a quick rundown on the features and tools that make Letterboxd a great social media platform for movie lovers.

How to use Letterboxd?

Letterboxd can be accessed for free by visiting the official website on your preferred browser, or by downloading the app on your Android or iOS devices. Although the application is regularly updated, Apple users have a slightly higher priority in terms of update rollouts, alongside the desktop/web version. Android users receive them a couple of weeks later, though it still does not take away from its seamless experience. 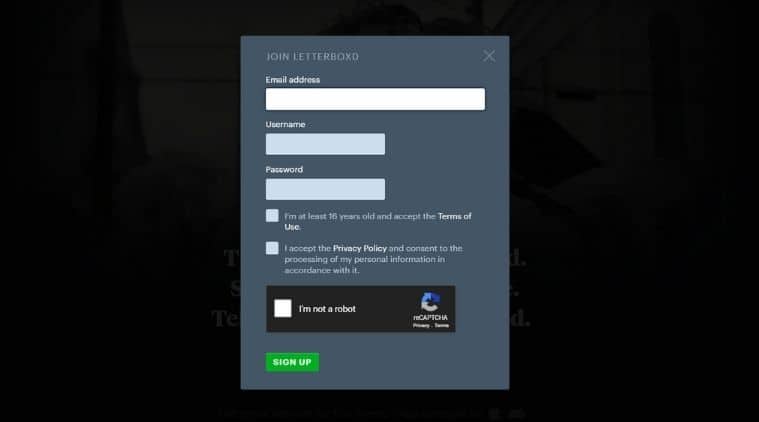 Clicking on the “Get Started” button opens a sign-up window, where you will be required to enter a username, password, and email id. Your username will then help you get recognised by others on the platform and let them follow your account. Letterboxd’s edit profile page, you can also add your favourite movies to display on your wall. (Screenshot)

From the homepage, it is recommended that you access your profile via the dropdown menu and then edit it to give it more personality. Here you can fill in your name, a description/bio, your location, preferred pronoun, and even features privacy options that limit people from replying to your reviews.

You can also add up to four favourite films to be showcased on your profile by simply searching for their name and can even add an avatar. 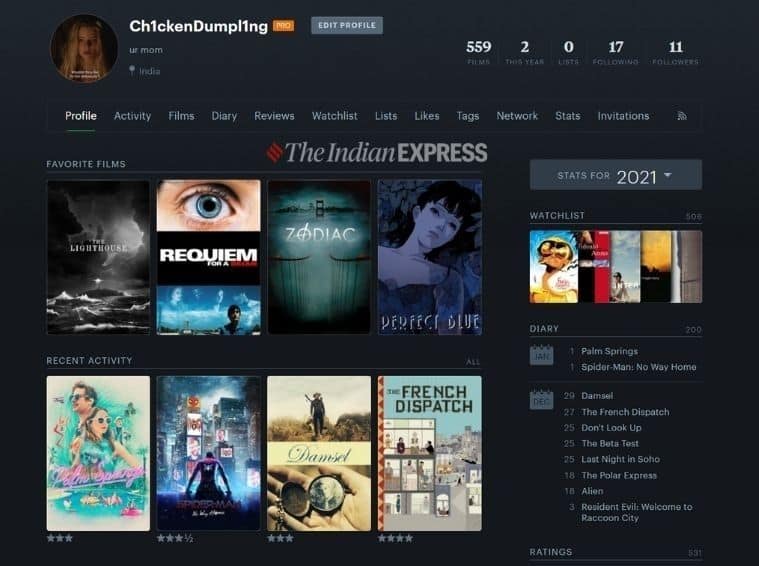 From here, it is simply a matter of heading back to the homepage, searching for any movies you have seen recently, and rating them out of five stars. Clicking on the “Review or log” button, as the name suggests, lets you write a review and post it publicly on your wall.

You can specify the date you watched the said film to keep better track of it, or if you have not seen it, add it to your watchlist. On the left-hand side, right below the poster, the website recommends streaming services and stores where you could legally access the movie. By default, this will be set to the United States, but you can change the region and customise services through the settings page. 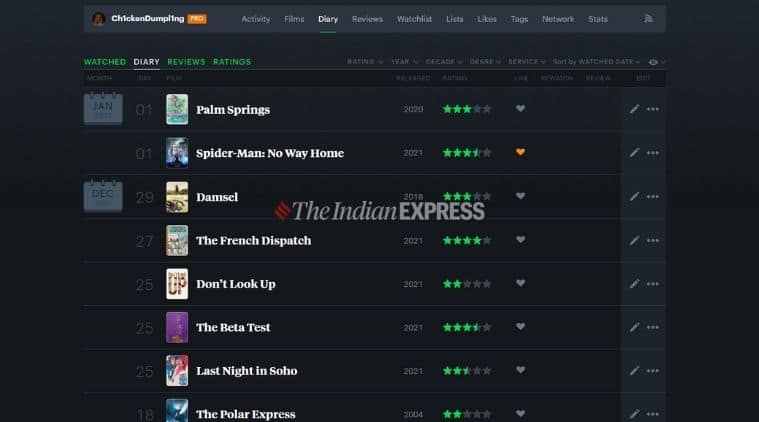 Letterboxd’s Diary compiles every movie you have watched in an easy-to-understand, calendar-like format. (Screenshot/Indian Express)

Letterboxd’s user interface is much better than IMDb and makes it easy for users to keep track of their watched movies by accessing their dairy. It compiles every entry into a dated list, like a calendar. It also shows your rating, release year, and reviews if you have written any. This page can be accessed directly from your profile. Letterboxd’s Watchlist, where can filter films based on different criteria. (Screenshot/Indian Express)

On the right-hand side, you can open up your watchlist, which displays a collage of pending films via posters, making it easy to distinguish between them. Using the filters above, lets you sort out the movies based on streaming services, genre, decade, film length, or the average rating from other users on the platform. Letterboxd Members page, where you can follow others and connect with them. (Screenshot)

Accessing the “Members” page will connect you with other members, who you can follow and engage with by checking their profile and seeing if they have similar tastes in movies. You can also see what is popular among them, what films they have been watching, read or like their reviews, comment on them, go over their general activity, etc.

Dedicated pages and tracking – Clicking an individual’s name or icon, be it someone from the cast or the director, opens a separate profile page that lists their entire filmography. Here, you get a statistical percentage of the stuff you have seen and what is left to catch up on, helping you keep track of your favourites. 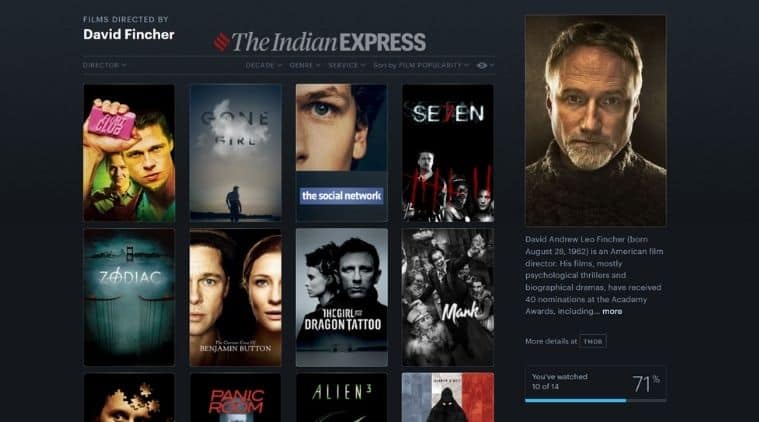 The dedicated profile page for an individual offers a statistical percentage of what films you have seen and what is left. (Screenshot/Indian Express)

Using the filter, you can also fade out watched films, while the remaining ones stay highlighted, making it easy to distinguish between them. You can also check their work in other fields such as any writing projects they took part in or if they served as a producer on other films.

Lists – Another cool functionality of the website is that people can build lists of movies. So, let’s just say if you are in the mood for watching some “Anxiety Inducing Cinema,” you can simply type in the query and instantly get access to these precise lists curated by other members.

From there, it is simply a matter of watching them or adding them to your watchlist for later. And it does not have to be limited to genres either, as the app allows you to be creative and funny with your list(s). 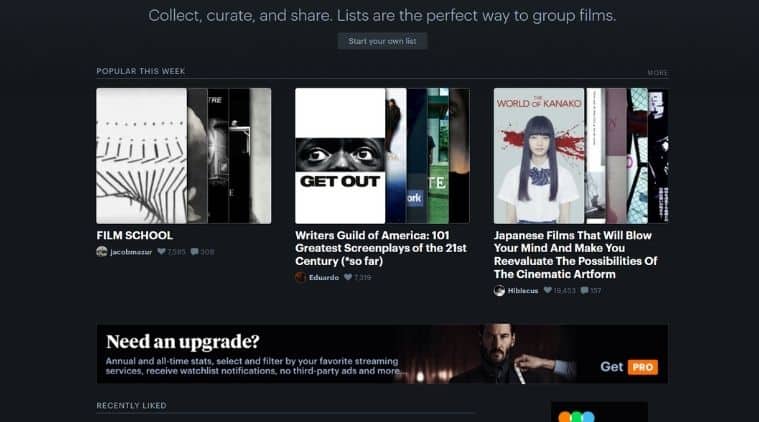 For instance, Paul Dano is known for getting beat up to a pulp in most of his movies. So, typing the keywords – “Paul Dano beat up,” grants a compilation of movies matching the criteria. Other lists include movies geared towards film school students, top Japanese films, ones with less than 90 minutes runtime, and more. Letterboxd Journal, the editorial section of the platform.

Limited series – Although Letterboxd is dedicated to full-length features and short films, it also lets you keep track of and rate TV shows, as long as it is a “limited series”. Any series that concludes its story within one season is counted as a quote-unquote long movie and is featured on the platform.

Individuals who care deeply for cinema and want to support the website and keep it running can opt for a Pro membership. Priced at Rs 719 per year ($19 for the US; regional pricing), the feature adds more filtering options, notifies you when a particular film arrives on a service, and provides personalised annual and all-time stats based on your diary entries. Additionally, it gets rid of both first and third-party advertisements from the page. The Letterboxd Stats page is included with Pro and Patron membership. (Screenshot/Indian Express)

There is also a Patron subscription, which offers everything included with “Pro,” while letting you add backdrops/cover images on your profile and reviews. The service is listed at Rs 1849 per year ($49) and provides early access to beta features and lights up your name on Letterboxd’s Patron page. Both subscriptions add a badge next to your name as well.