A NASA exoplanet satellite mission has discovered mysterious signals from a dusty object, that astronomers say ‘could be a double star system’ surrounded by rubble.

The Transiting Exoplanet Survey Satellite, TESS, was launched in 2018 with the goal of discovering small planets around the sun’s nearest neighbouring stars.

Since it was launched, the satellite has discovered 172 confirmed exoplanets, and compiled a list of over 4,700 candidates that astronomers need to review.

Looking back through this catalogue, experts from the Harvard-Smithsonian Center for Astrophysics in Cambridge, Massachusetts, wanted to find out why an object dubbed TIC 400799224 emits strange signals.

Studying the dips in light and data from the object, the astronomers believe it may be a binary, or double star system surrounded by a massive cloud of dust.

The team say this cloud of dust may be rubble caused by the breakup of a large asteroid in orbit around the pair of stars. 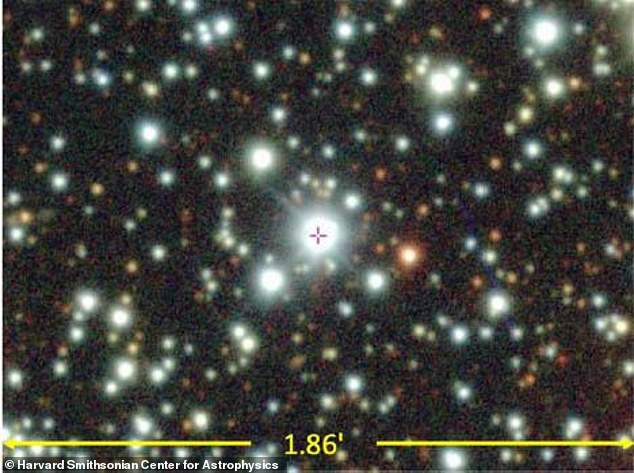 Looking back through this catalogue, experts from the Harvard-Smithsonian Center for Astrophysics in Cambridge, Massachusetts, wanted to find out why an object dubbed TIC 400799224 emits strange signals

Astronomers spotted it in the archive catalogue, and were drawn to it due to an unusual dipping event.

The light from the stars dips by 25 per cent in an unusual way.

The team believe it is a binary star system shrouded in dust from the destruction of a large asteroid.

They thought it was a single star, but now know it is a binary pair, with similar brightness, 300 AU apart.

They can’t say which of the two stars is experiencing the dip in brightness.

The dips happen every 19.77 days, suggesting the dust cloud orbits a star, although the duration, depth and shape of the dips varies.

The cloud is also fairly thick, blocking up to 37 per cent or 75 per cent of the light from the host star, depending on the true host.

TESS looks for tiny, rhythmic dips in the brightness of a star, caused by a planet passing between the telescope and the star, which blocks a fraction of starlight.

However, planets aren’t the only stellar objects that can cause a drop in brightness.

Since it launched TESS has found a wide range of phenomenon, from supernovas to triple star systems.

Looking back through data from 2019 gathered by TESS, the Harvard-Smithsonian team were drawn to TIC 400799224, which became 25 per cent dimmer in a few hours — and made multiple sudden brightness changes.

As well as using data from the TESS observations, which spends a month at a time on a single patch of sky, the team used other instruments to study the object.

They incorporated data from the All-Sky Automated Survey for Supernovae and the Las Cumbres Observatory — networks of ground-based observatories.

When they combined the data, they were able to paint a picture of what could be causing this unusual pattern of dimming.

While they can’t confirm the details, the team believe that there is a binary star system, with a pair of stars circling each other, at the heart of the system.

One of the stars seems to pulse every 19.77 days, which they believe is caused by a massive cloud of dust surrounding the star.

The mass of this dust cloud is equivalent to the remains of an asteroid about six miles wide, according to the US researchers.

The cloud is also fairly thick, blocking up to 37 or 75 per cent of the light from the host star, depending on the true host.

They currently don’t know which of the two stars is host to the cloud of debris that is causing the periodic dimming.

There are a number of possible causes for such a large dust cloud, including a collision between miniature planetoids, or asteroids.

The way the dust blocks the star is fairly erratic in its shape, depth and duration, and are detectable bout a third of the time or less, the team explained.

‘The nature of the orbiting body itself is puzzling because the quantity of dust emitted is large,’ the researchers said. 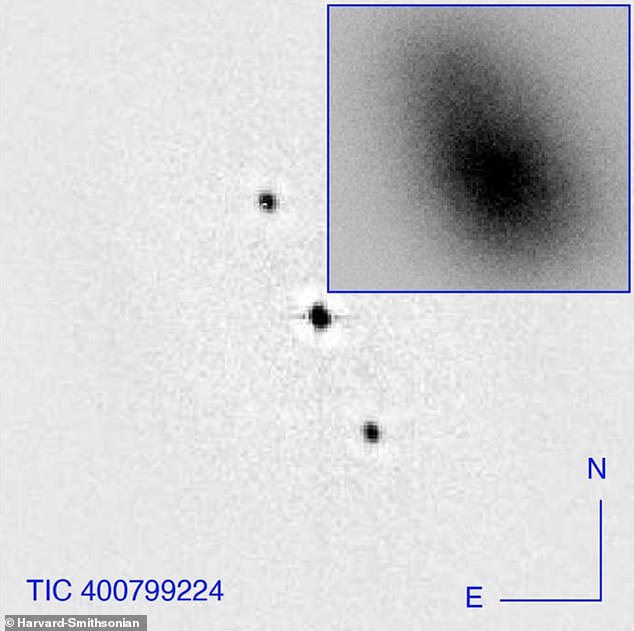 Studying the dips in light and data from the object, the astronomers believe it may be a binary, or double star system surrounded by a massive cloud of dust

‘If it were produced by the disintegration of an object like the asteroid Ceres in our solar system, it would survive only about eight thousand years before disappearing.

‘Yet remarkably, over the six years that this object has been observed, the periodicity has remained strict and the object emitting the dust apparently has remained intact.’

The team plans to continue monitoring the object and to incorporate historical observations of the sky to try to determine its variations over many decades.

The findings have been published in the Astronomical Journal.

WHAT IS THE TESS SPACECRAFT?

NASA’s ‘planet hunter,’ spacecraft, is equipped with four cameras that will allow it to view 85 per cent of the entire sky, as it searches exoplanets orbiting stars less than 300 light-years away.

By studying objects much brighter than the Kepler targets, it’s hoped TESS could uncover new clues on the possibility of life elsewhere in the universe.

Its four wide-field cameras will view the sky in 26 segments, each of which it will observe one by one.

In its first year of operation, it mapped the 13 sectors that make up the southern sky, and scoured the northern sectors the following year.

Since it was launched in 2018, TESS has found over 170 confirmed exoplanets, and has a catalogue of over 4,700 yet to be verified.

It has also discovered other strange phenomena including supernova and triple star systems since it was launched.

Tess is 5 feet (1.5 meters) wide and is shorter than most adults.

The observatory is 4 feet across (1.2 meters), not counting the solar wings, which are folded for launch, and weighs just 800 pounds (362 kilograms).

NASA says it’s somewhere between the size of a refrigerator and a stacked washer and dryer.