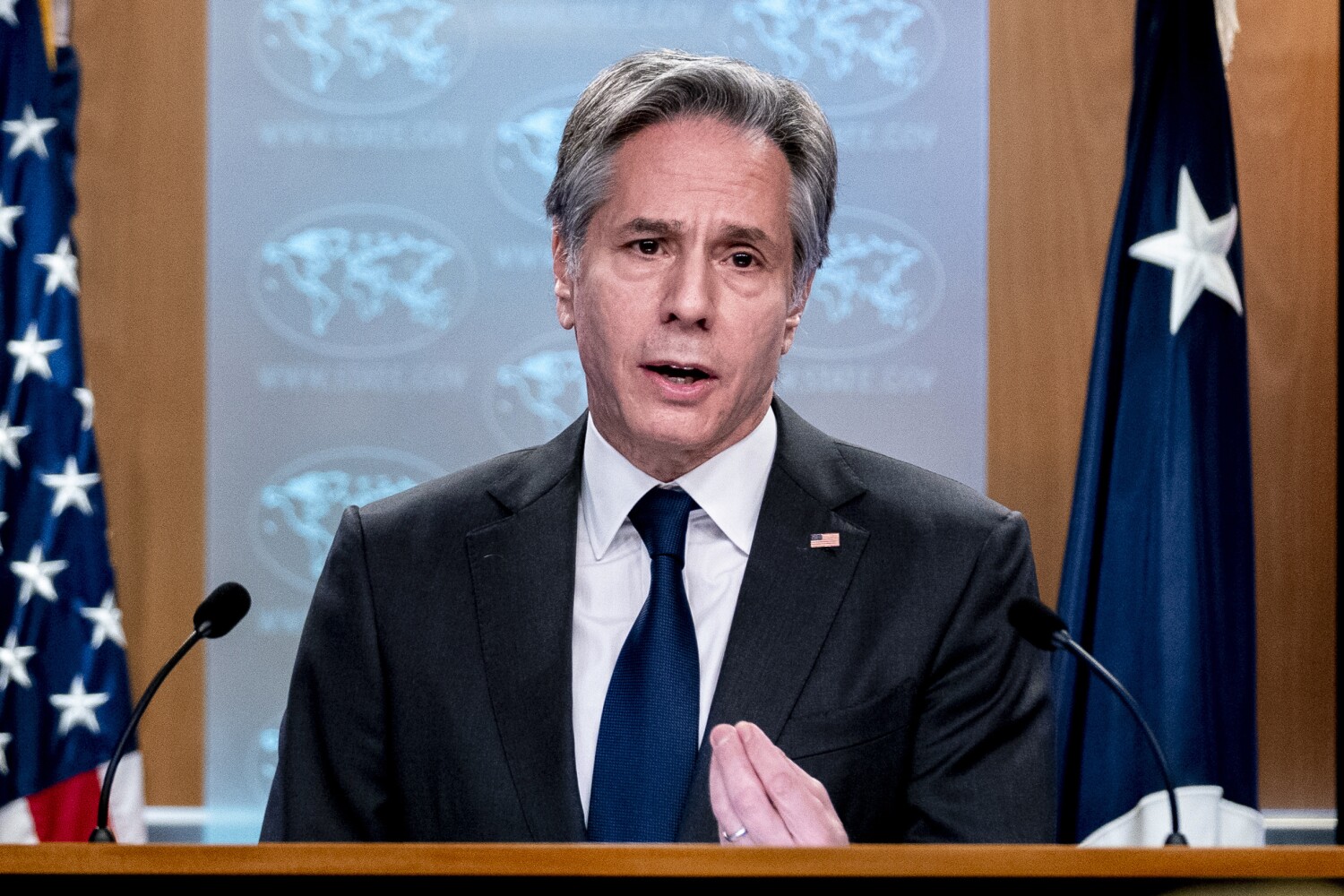 The U.S. and Russia open high-stake talks on the fate of Ukraine on Monday, but prospects for a resolution — or any agreement — are dim, diplomats say.

Moscow and Washington are worlds apart on whether Ukraine should be embraced by the West or cast its lot with Vladimir Putin’s Russia. And U.S. Secretary of State Antony J. Blinken has had to struggle to build unity among America’s allies on how to defend Kyiv from an increasingly aggressive Russia.

“It’s very hard to make actual progress” with Russia “in an atmosphere of escalation and threat with a gun pointed to Ukraine’s head,” Blinken said ahead of the talks.

Russia, which invaded a part of Ukraine nearly eight years ago, has amassed some 100,000 troops along the border in recent weeks and spewed a campaign of invective, accusing Ukraine and the NATO alliance of posing a looming threat.

After a couple of telephone conversations between Presidents Biden and Putin, and dozens of other lower-level consults, the two governments agreed to a meeting Monday in Geneva of the Strategic Stability Dialogue, a U.S.-Russia working group established last year to focus on arms control, followed by meetings the rest of the week involving NATO and other larger multilateral organizations. The U.S. delegation is being led by Deputy Secretary of State Wendy Sherman.

Biden, Blinken and NATO officials have issued dire warnings to Russia if it were to follow through with another invasion of Ukraine. Most punishment would involve additional economic sanctions on Moscow, Putin and Russian oligarchs, the Western officials say. Numerous sanctions already in place, however, have failed to alter Putin’s behavior.

Most officials are ruling out military action beyond continuing to arm Ukraine forces and, possibly, repositioning additional NATO troops on the eastern flank of NATO territory that includes countries such as Poland.

“A diplomatic solution is still possible and preferable,” Blinken said. “If Russia chooses it.”

Ukraine has symbolism for both the U.S. and Russia that extends past its real-life role. For Putin, it represents part of the lost power of the Soviet Union, which he yearns to reestablish. In Washington, Ukraine came to represent the corruption of the Trump administration after then-President Trump attempted to secure political favors from President Volodymyr Zelensky, actions that led to Trump’s first impeachment.

The broader issue, however, is how Russia and the rest of U.S.-allied Europe will coexist. Much of Europe — including nations once part of the former Soviet bloc — are now part of the North Atlantic Treaty Organization with the United States and Canada.

NATO expansion into the part of the world he considers Russia’s domain infuriates Putin.

U.S. diplomats are also worried about presenting a united front to Russia. Major powers such as Germany have rhetorically condemned Moscow’s belligerence but are more dependent on Russia for energy and trade than the U.S. is. They may be inclined to refrain from tough actions to punish Putin.

The U.S. says it has committed $2.5 billion in “defensive” military equipment to Ukraine over the last seven years and would ramp that up if Russia continued its aggressive position.

“President Biden has told President Putin, should Russia further invade Ukraine, we will provide additional defensive material to the Ukrainians above and beyond that which we already are in the process of providing,” a senior State Department official said in a briefing of reporters conducted on condition of anonymity.

William Taylor, a former U.S. ambassador to Ukraine who became a star witness in Trump’s first impeachment hearings, is among several officials and experts who advocate ramping up sanctions against Moscow now rather than waiting for an invasion.

“If you wait until [Putin] moves, you are responding, not deterring,” he said.

U.S. administration officials said they might be able to find some common ground with Russia on broader arms control, missile deployments, military exercises or similar issues. But both the U.S. and Russia have bottom-line demands that the other side considers nonstarters.

Putin wants a pledge that NATO will not expand further. NATO Secretary-General Jens Stoltenberg reiterated Friday that countries that want to join the 30-nation alliance will be welcome to apply.

And for Washington, Russian de-escalation is imperative.

The upcoming talks may be a start, Taylor said, “but nothing really serious is going to happen as long as Russia is mounting troops” at the edge of Ukraine.