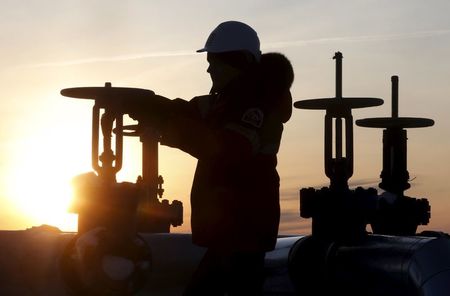 Investing.com – Oil’s three-day rally came to a halt on Thursday as weather forecasts indicated that freezing temperatures initially expected for the Christmas weekend might be delayed, reducing the potential for a spike in heating oil demand.

The Global Forecast System, the weather forecasting model preferred for the United States, and the ECMWF — the default version used for Europe — are indicating moderating temperatures from the start of next week that could linger into the first week of January. That is opposed to the super cold temperatures the two models initially called for from this Friday through the year-end.

A better-than-expected 3.2% growth in , or GDP, for the third quarter — versus forecasts for a 2.9% expansion — also brought rate hike concerns back to the market’s forefront.

GDP expanded at an annual rate of just 0.6% in the second quarter after a contraction of 1.6% in the first quarter, making the third quarter growth more significant. For economists, it was a sign that the United States was on solid footing versus the notion that the country was headed for a recession. Conventionally, two straight quarters of negative growth means an economy is in recession.

While the latest GDP reading was welcome news to financial markets, the stronger performance also meant that the Federal Reserve will likely keep up with the pace of

it has established since the first quarter to rein in inflation that reached 40-year highs in 2022.

“Crude prices are wavering as it’s been quiet on the macro front,” said Ed Moya, analyst at online trading platform OANDA. “Energy traders seem to be ready for the holidays as we are not really seeing any exciting moves.”

The drop in crude oil dovetailed with which came off its highs as traders took note of forecasts indicating there will be a pre-Christmas warming in weather instead of a major Arctic blast that had been expected to dominate much of the United States over the next few days. Heating oil was at $3.1365 per gallon after rallying to $3.2182 earlier.

On the economic front, Friday’s third quarter GDP growth came a day after a gauge for U.S. index gauge jumped to 108.3 in December from 101.4 in November. Consumer activity makes up for about 70% of the U.S. economy and is often a forerunner for inflation.

U.S. inflation, as measured by the Consumer Price Index, or , expanded by 7.7% during the year to October, growing at its slowest pace of in nine months after hitting a four-decade high of 9.1% during the 12 months to June.

The drop in CPI came after relentless interest rate hikes by the Fed, which has added 375 basis points to rates since March. Prior to that, rates peaked at just 25 basis points, as the central bank slashed them to nearly zero after the global COVID-19 outbreak in 2020.

Despite such aggressive rate hikes, inflation remains more than three times higher than levels preferred by the central bank, which has vowed to get it back to its 2% target.