Perching pigeons are causing some customers of Elon Musk‘s Starlink broadband to lose internet access, by sitting on the ‘bird bath’-like satellite dishes.

Cyber-security expert Professor Alan Woodward, of the University of Surrey, recently installed the SpaceX service because he couldn’t get a fast enough traditional connection.

He endured occasional outages from the provider, which relies on signals beamed from hundreds of satellites in low Earth orbit to a small dish on his roof.

Unlike the satellite dishes that deliver Sky and Freesat to televisions, the Starlink dish is small, faces upwards and looks somewhat like a bird bath.

Prof Woodward says he still isn’t entirely sure of the cause, but suspects it may be caused by ‘pesky pigeons’ sitting on the dish, which is on the roof over his kitchen.

This is something backed up by experts speaking to the BBC, who claimed a ‘pigeon sitting on a Starlink antenna would certainly degrade its performance’. 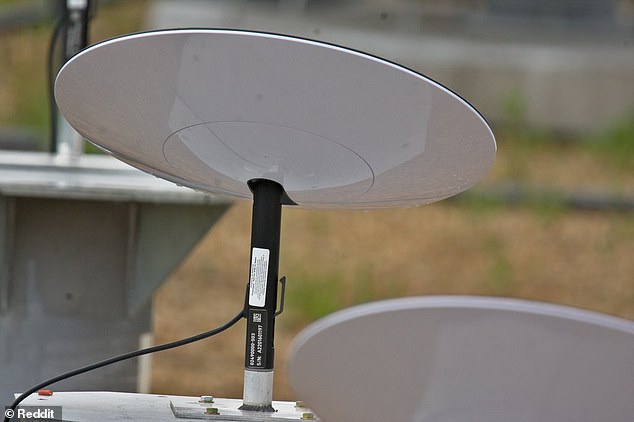 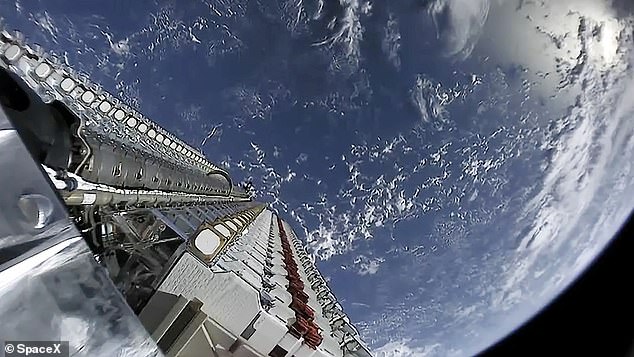 He noticed occasional outages from the internet service, which relies on signals beamed from hundreds of satellites in low Earth orbit to a small dish on his roof

INTERNET ON THE MOVE: SPACEX FILES TO PUT STARLINK ON VEHICLES

A new filing from the Elon Musk-owned SpaceX suggests it is looking beyond just beaming internet into homes.

According to an application with the Federal Communications Commission (FCC), SpaceX aims to place its user terminals on vehicles, vessels and aboard aircraft.

This would allow customers to connect to the internet while ‘on the move.’

‘Operation under the requested blanket license will provide the first option for some and promote competition for others in the market for in-motion broadband services, to the benefit of drivers, ship operators, and air travelers in the United States and abroad,’ reads the filing.

‘These services will enhance the security of mobile platforms and allow operators and passengers to access services that enable increased productivity.’

Sky customers have reported disruption in the past from birds nesting behind or even on dishes, with a number of companies selling bird deterrents.

When Prof Woodward shared his concerns about Starlink outages on Twitter, a number of users gave their suggestions to deter the avian invaders.

One user suggested laying plastic snakes around the dish, and another said it was worth getting a fake owl, to deter the pigeons from coming nearby.

More extreme suggestions included electrifying the areas and covering the dish with a net that won’t cause problems for the signal itself.

A recent filing by SpaceX with the FCC may present a solution to the bird problem, in the form of a more rugged and high-performance version of the dish.

They are build for ‘use in harsh environments’, and under more extreme situations, where the tolerance for interference is higher, suggesting they may be able to work even with a pigeon sitting on the edge thinking it is a bird bath.

However, pigeons aren’t the only problem facing Musk’s service, which is officially still in beta as the firm doesn’t have complete global coverage from its satellite constellation – with about 1,500 out of a planned 30,000 launched so far.

On August 25, the service, with an estimated 90,000 global customers, went down for about an hour for many of its users, and Starlink did not explain why.

It went down at about 08:30 EDT on August 25 for about 20 minutes, with Twitter users speculation it was the result of unplanned ‘maintenance’ on the network.

SpaceX did not comment on the story, but have said in the past that this is a beta service, and the full satellite constellation has yet to be launched into space.

This is taking longer than expected, as the Covid-19 pandemic caused a shortage of pure oxygen, with the priority going to medical use.

This led to a shortage for firms like SpaceX to use in both rocket fuel and the fuel for the satellites themselves. There is also a global computer chip shortage.

Despite being at the beta test stage, recent speed tests have shown users in the US area already achieving speeds of 97 Mbps, not far from the average of 115 Mbps. 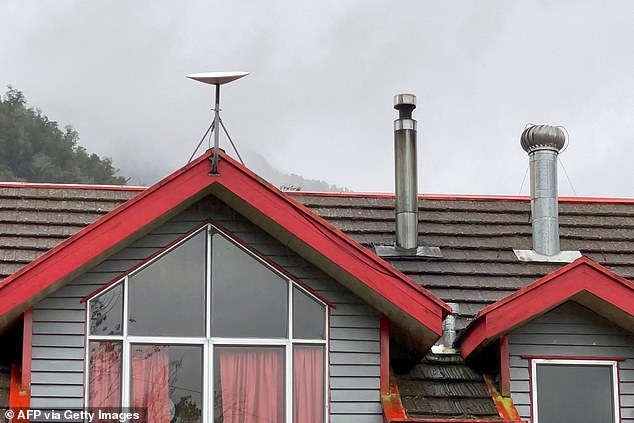 Unlike the satellite dishes that deliver Sky and Freesat to televisions, the Starlink dish is small, faces upwards and looks somewhat like a bird bath

This means SpaceX is just shy of providing users withy the ability to download a movie in just one minute – the internet needs a download speed of 100 Mbps.

It is some way off the maximum gigabit speeds available from some fibre optic services, but they are rarely available in more sparsely populated rural areas.

SpaceX is just one of a number of firms launching satellite internet services in low Earth or near Earth orbit, where latency can be kept low compared to traditional satellite internet, where the spacecraft are in geosynchronous orbit.

These are thousands of miles from the Earth, and while speeds can be fast, the latency is poor, making them unusable for gaming or some streaming services. 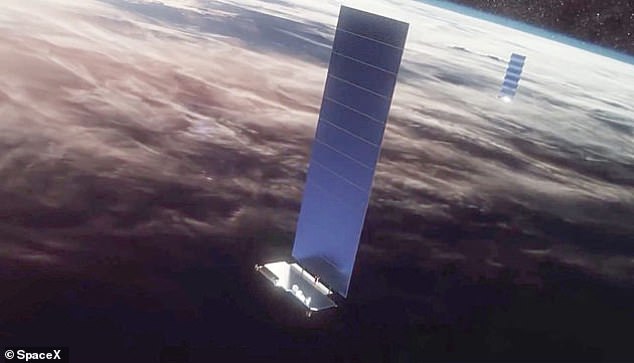 Prof Woodward says he still isn’t entirely sure of the cause, but suspects it may be caused by pigeons sitting on the dish, which is on the roof over his kitchen

Amazon is launching Project Kuiper, its own satellite internet service, putting 3,236 satellites into the same region of space as Starlink to deliver rural internet access.

Canadian firm Telesat is also planning to launch its Lightspeed network of 298 satellites in low Earth orbit, backed up by geosynchronous networks.

OneWeb, owned by the UK government, Bharti and others, already has about 250 of its planned 648 satellites in orbit, with the aim of providing backbone connections to existing operators, such as BT, rather than directly to consumers.

National and pan-national governments are also working on their own satellite internet services, with the EU and China both considering launching thousands of satellites into low Earth orbit in the coming decades.

Elon Musk’s SpaceX has launched the fifth batch of its ‘Starlink’ space internet satellites – taking the total to 300.

They form a constellation of thousands of satellites, designed to provide low-cost broadband internet service from low Earth orbit.

The constellation, informally known as Starlink, and under development at SpaceX’s facilities in Redmond, Washington.

Its goal is to beam superfast internet into your home from space.

While satellite internet has been around for a while, it has suffered from high latency and unreliable connections.

Starlink is different. SpaceX says putting a ‘constellation’ of satellites in low earth orbit would provide high-speed, cable-like internet all over the world.

The billionaire’s company wants to create the global system to help it generate more cash.

Musk has previously said the venture could give three billion people who currently do not have access to the internet a cheap way of getting online.

It could also help fund a future city on Mars.

Helping humanity reach the red planet is one of Musk’s long-stated aims and was what inspired him to start SpaceX.

The company recently filed plans with the Federal Communications Commission (FCC) to launch 4,425 satellites into orbit above the Earth – three times as many that are currently in operation.

‘Once fully deployed, the SpaceX system will pass over virtually all parts of the Earth’s surface and therefore, in principle, have the ability to provide ubiquitous global service,’ the firm said.

‘Every point on the Earth’s surface will see, at all times, a SpaceX satellite.’

The network will provide internet access to the US and the rest of the world, it added.

It is expected to take more than five years and $9.8 billion (£7.1bn) of investment, although satellite internet has proved an expensive market in the past and analysts expect the final bill will be higher.

Musk compared the project to ‘rebuilding the internet in space’, as it would reduce reliance on the existing network of undersea fibre-optic cables which criss-cross the planet.

In the US, the FCC welcomed the scheme as a way to provide internet connections to more people.