Sanya Malhotra recalls putting extra pressure on herself for Dangal: ‘Had one minute of wrestling, but I…’

In a span of five years, Sanya Malhotra has delivered acclaimed performances featuring in a record-breaking blockbuster, a National Award-winning dramedy and a series of well-received films- all while battling crippling self-doubt as a performer, which she says didn’t let her celebrate her success.

Malhotra burst onto the scene as wrestler Babita Kumari in her 2016 debut Dangal. The global success of the Aamir Khan-headlined sports drama was followed by Vishal Bhardwaj’s boisterous Pataakha, where she played one half of the quarrelling sister duo.

The actor then balanced the quirk of Delhi-set Badhaai Ho with the silence of Ritesh Batra’s quaint Photograph.

In an interview with PTI, the 29-year-old actor said all her best-reviewed performances were a result of a maddening pressure to not make a single misstep. 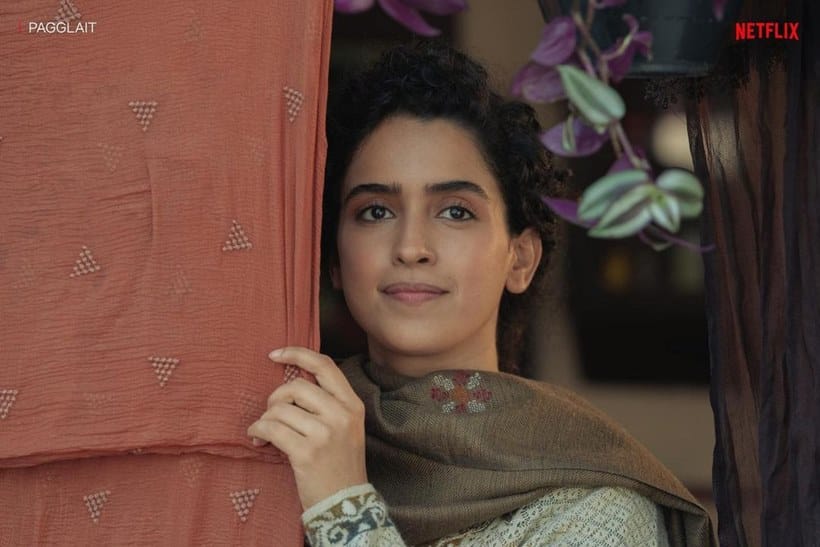 Sanya Malhotra in a still from the film Pagglait, streaming on Netflix.

“Earlier, I was too harsh on myself as an actor. I would get mad at myself for making mistakes, which was definitely not helping me with anything. I was harsh on myself because maybe I was still trying to learn about so many things, about the industry, the job. Even a small mistake used to tick me off. I was trying to be perfect in everything,” Malhotra said.

Malhotra recalled how she would never like her work despite the critical acclaim that came her way. The dislike was so intense, she would cry herself to sleep, she said.

“Whenever a film used to come out, I would not listen to anyone and first give myself a report- ‘I didn’t do this well’, so that if next time I got an opportunity like that, I should work harder. After every release, I would go back home and cry myself to sleep. My family has seen it so much.” This need for perfection, however, was quite new and is contrary to the life she led in Delhi before joining the film, she said. Malhotra, as a student, never chased the perfect score, but something changed when she bagged Dangal.

For an outsider, a film starring Khan, where she was also getting a solid positioning next to another debutant actor Fatima Sana Shaikh, meant no room for mistakes.

“It was the pressure that I had put on myself during my first film. I thought if I was getting this opportunity, then I have to be perfect. In Dangal, I had one minute of wrestling, but I prepared for 10 months. Not that I had an option, but there was a lot of pressure from my end to not let go of a film like Dangal.

“That was my conditioning as an actor and that stayed with me. Then the second film happened, then the third followed. There was a lot of unnecessary pressure I was putting myself through, which I realised wasn’t worth it.”

In 2020, Malhotra found comfort from an unlikely source- the coronavirus pandemic. During the nationwide lockdown, Malhotra was with her family in the capital and gearing up for the release of her first digital outing Shakuntala Devi.

The Vidya Balan-headlined drama released on Amazon Prime Video in the middle of the pandemic and that meant all its promotional interviews and events were held virtually.

For Malhotra, who calls herself “inherently shy”, the opportunity helped ease her into the pre-release anxiety she was used to facing.

“The release week makes you anxious, at the top of it when you are promoting a film, it is like putting yourself in the middle of anxiety. I was with my family that time and they could all see I was going crazy because the film was coming out. But then I started working on not being too anxious regarding the film’s reception.

“I was happy with my work. I learnt that the only thing I could control was my reaction to the work I am doing. Apart from that, nothing was in my control. That realisation happened then. That helped me later when Ludo released because I was completely relaxed. Now, I make sure I am celebrating the release and not making it a big deal, a dreadful experience.”

Last year, when she saw two of her films released on streaming platforms, Pagglait and Meenakshi Sundareshwar, the actor felt free from the pressure she had trapped herself in and was finally in a “good space”.

“I know I can’t be perfect, but that doesn’t mean that I will not work hard. I just won’t be too critical because it was not a good state of mind to be in. Even if I am not doing really well, I am ok with it. I am not going to take myself or the job too seriously, that’s for sure now,” she added.