The Taliban said Monday that Afghans who assisted foreign forces in the country over the last 20 years would “not be in any danger” as long as they show “remorse.”

Many Afghans who worked as interpreters, security guards, drivers and helped foreign embassies, missions and militaries in the country have sought to leave or have already left Afghanistan. Those who remain complain of constant threats against them and their families. 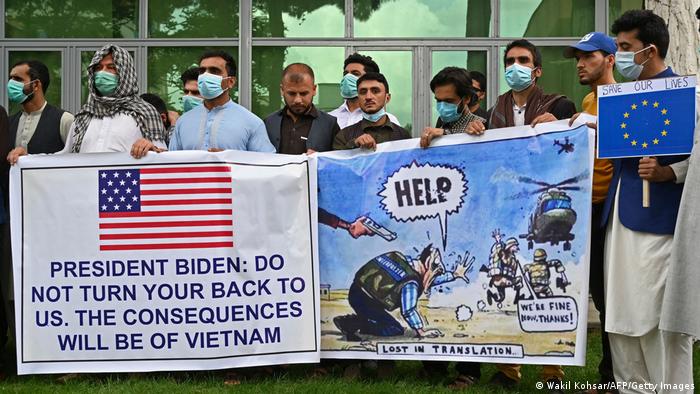 What the Taliban said

The Taliban statement offered veiled threats between words of reassurance.

They warned that local hires should “not desert” the country, but “must not engage in such activities in the future.”

“If they are using the danger as an excuse to bolster their fake asylum case, then that is their own problem,” the statement read in part.

It was also not immediately clear how those who worked with foreign nationals in Afghanistan might show appropriate “remorse” in the Talban’s eyes.

Afghans who worked with Americans and other foreigners  could “abandon enemy ranks and opt to live as ordinary Afghans in their homeland.”

Why Afghans who worked with foreigners are fearful

Over the last 20 years, many Afghan translators and other assistants to the international community and security forces have been killed and tortured.

One US non-governmental organization, No One Left Behind, has recorded 300 such deaths since 2016.

The US Embassy in Kabul is currently processing 18,000 special immigrant visas for former Afghan colleagues and families who seek a permanent exit from the country for having worked with Americans. Several countries including Germany and the UK have similar programs to help their Afghan colleagues relocate.

Omid Mahmoodi, an interpreter who worked with US forces between 2018 and 2020, told AFP, “The Taliban will not pardon us. They will kill us and they will behead us.”

In the past, the Taliban has labeled Afghans like Mahmoodi “traitors” and “slaves” of the foreign forces in Afghanistan.

Why Afghan local staff want to exit by September 11

In recent weeks in Kabul, Afghans who worked for foreigners and seek to leave due to the deteriorating security situation have held protests. They hope to depart ahead of the scheduled withdrawal of US and NATO forces by September 11.

The Taliban is under diplomatic pressure to provide a “safe environment” in the country after the withdrawal date of foreign forces in Afghanistan.

US President Joe Biden announced the date as it is the anniversary of the 2001 attacks on the World Trade Center in New York and the Pentagon.