A famous TikTok plastic surgeon has had her license suspended over allegations she botched surgeries and put patients’ private information on her social media.

Dr Roxanne Grawe, who went by Dr Roxy and posted goofy videos dancing in her scrubs, is accused of livestreaming operations and focusing on the camera instead of patient care. She even livestreamed operations and interacted with viewers in the middle of the procedure.

The social media star who has 846,000 followers and 14.6million likes on her TikTok account is now being sued by three former patients. But some of her patients have been left with debilitating post-surgery injuries, putting them out-of-work and leaving them unable to stand.

Dr Grawe, whose social presence also includes followings on Snapchat, Twitter and BeReal, owns Roxy Plastic Surgery in Powell, Ohio, just outside of Columbus. The State Medical Board suspended her license on November 18.

It comes as officials globally warn against women taking part in surgery tourism, where they travel to foreign nations like Turkey to receive cheaper procedures – that often end up botched.

Dr Roxanne Grawe (pictured), or Dr Roxy, has had her medical license suspended by the Ohio State Medical Board over concerns about botched surgeries and patient privacy 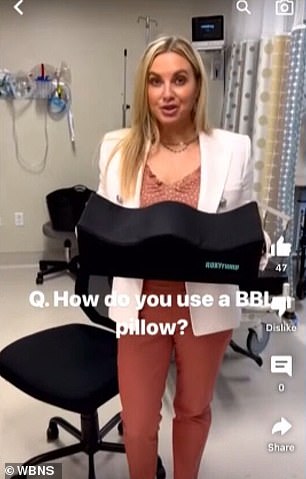 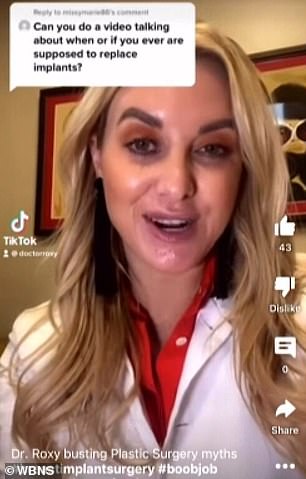 Dr Roxy had a TikTok following over over 800,000, where she discussed plastic surgery topics, spoke to patients and showed the results of her operations. The State Medical Board has expressed concerns about Dr Roxy’s social media usage as early as 2018 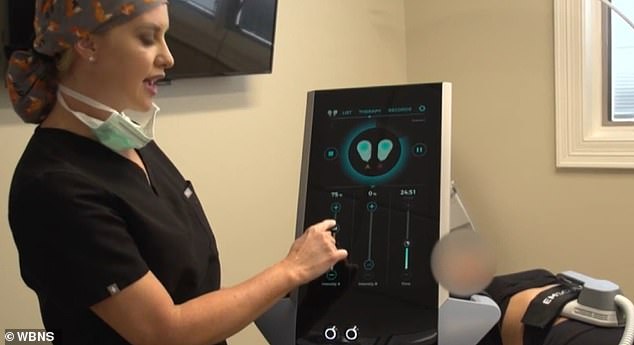 The board first sent Dr Grawe a warning on October 9, 2018, ‘regarding the need to maintain patient privacy when sharing photos or video via social media’.

She received a second warning on September 28, 2021 where the board expressed concerns about patient privacy and ethics with her social media use.

It also cited ‘avoidable complications’ the required additional surgeries for some patients.

Dr Grawe was made to do education courses in professionalism, ethics and to retrain procedures where her patients previously suffered complications.

Even after these course, the medical board claims that she still failed to protect patient privacy.

It claims that she pre-operation interviews, post-operation images of patients in the OR, livestreaming procedures and even interacting with live chatters while in the midst of a surgery.

Three patient cases were cited by the medical board. All are also filing lawsuits against Dr Grawe.

In one, which took place on March 21, she performed a Brazilian Butt Lift (BBL) – which takes fat from the abdomen and injects it into a patient’s but – on an unnamed patient while live-streaming on social media.

The medical board accuses her of looking at the camera and talking to viewers while carrying out a liposuction.

The board says the procedure should have required her full attention – meaning her live streaming was putting the patient at risk. 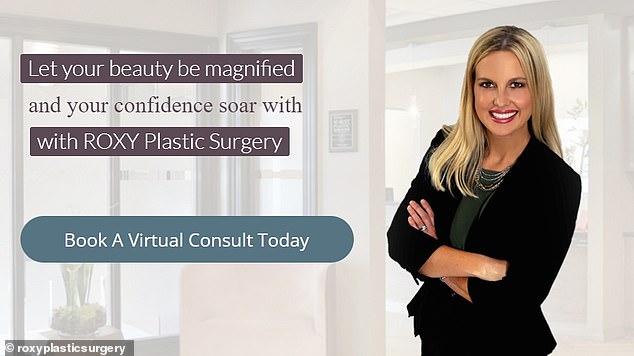 The Powell, Ohio-based, practice said it was not interested in responding to allegations made by the state medical board. Dr Grawe has until December 17 to request a hearing regarding he license

Dr Grawe also failed to provide the patient with written instructions on managing pain or other complications after leaving the doctor’s care.

Five days after the procedure, the patient was sent to an emergency room after she was found to have free air in her abdomen and that her liver was not properly disposing of toxins.

She required an extended stay in the hospital as a result of these complications.

A second unnamed patient, who also received a BBL, claims she did not receive proper post-op instructions after the operation either.

James Arnold, a Cincinnati, Ohio-based attorney who is representing this patient in a lawsuit against Dr Grawe, said his client was also told not to seek medical care. 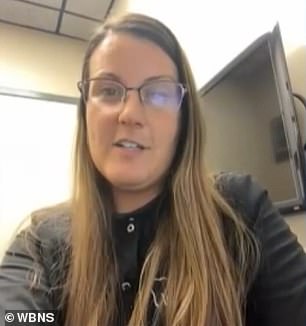 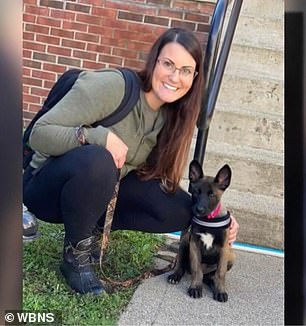 Amber Runyon (pictured), received a ‘Mommy Makeover’ from Dr Roxy and is now suing the practice. She said she discovered Dr Roxy on Snapchat. Issues with drainage after her surgery led to her missing work for two months

Amber Runyon is the final of the three patients cited, and has filed a suit against the practice. She told WBNS that drains implanted into her surgical incision were not working properly. This can lead to fluid build-up and infection after an operation.

Ms Runyon contacted the practice about the issue, but was advised by a nurse at Roxy Plastic Surgery not to go to the hospital.

This made her condition worse. She ended up missing work for two months and still cannot properly stand due to complications with the drains.

What is a Brazilian Butt Lift?

A Brazilian Butt Lift, or BBL as it is often referred to, is a surgery where a doctor moves fat from the abdomen and hip to a person butt

The goal is to create the ‘hourglass’ body shape, with thin hips and a wide buttocks

Recovery for BBLs can take months, and require a woman to avoid sitting, to sleep on their side and wear compression garments to assist in the healing process

It is a risky surgery as well. Fat embolization, where fat enters the blood stream and can travel to the heart or lungs

Some women will also go to countries in Latin America or to Turkey, where they can receive the surgery cheaply

She said that she chose to receive a ‘Mommy MakeOver’ , a procedure that includes a breast surgery and tummy tuck, with Dr Grawe because of her social presence.

Ms Runyon discovered the doctor via Snapchat. She felt that the step-by-step breakdown Dr Grawe provided for each operation made her well prepared.

She was not the only patient advised against seeking medical care after suffering complications from surgery at Dr Grawe’s practice.

Dr Grawe had her license suspended by a 7-0 vote, with three members abstaining.

When approached by DailyMail.com, Roxy Plastic Surgery said Dr Grawe was ‘not interested’ in speaking about the case.

The doctor has until December 17 to request a hearing to discuss the suspension of her license.

The prevalence of doctors on TikTok has risen in the wake of the Covid pandemic.

Experts have raised concerns that during the age of social media, ‘med Twitter’ and ‘MedTok’ influencers are putting their patients privacy at risk to build a personal brand.

Dr Grawe has over 800thousand TikTok followers and 134,000 on Instagram. Both accounts are now private.

Her Twitter profile, with 2,200 followers, features dozens of pictures of women before and after operation.

She also links to an account on the budding social media platform BeReal, where she also posts photos from inside the operating room.