Tripledemic: flu and RSV infection rates drop in latest CDC report, as COVID is on the rise

The ‘tripledemic’ in America could soon reach its end – as cases of both the flu and respiratory syncytial virus (RSV) have cratered for the second straight week.

In its weekly flu report today, the Centers for Disease Control and Prevention (CDC) confirmed 33,041 infections during the week ending on December 17, a 26 percent week-over-week drop.

Cases of RSV continued to fall too, dropping to 3,554 illnesses that week – a 76 percent drop from the first week of December and a low point since mid-September.

The report comes days after a CDC spokesperson warned Americans the outbreak of respiratory illnesses this year could last deep into winter.

While the flu and RSV are declining, Covid is starting to rise – along with the bacterial infection Strep A.

Flu cases dropped for the second straight week in the most recent CDC report, with 33,041 confirmed infections. This is a 26 percent drop from previous weeks 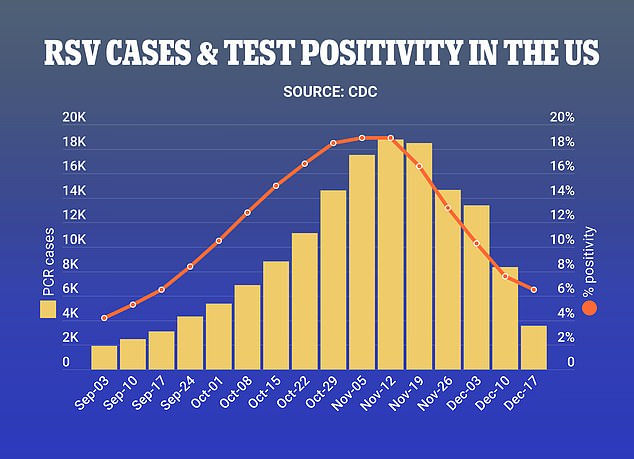 RSV cases continued their tumble this week, falling to 3,554 confirmed infections. This is half as many cases as the week prior, and the lowest weekly infection total since mid-September

Fears about a so-called ‘tripledemic’ first emerged over summer when Australia and New Zealand – whose winter is during America’s summer – suffered devastating flu seasons.

Experts have pointed to lockdowns, mask mandates and other pandemic orders over the past two years as reason why this year’s flu season has been more brutal than those past.

This is the worst flu season America has suffered since the Swine Flu Pandemic of 2009 – and experts have warned for months that it would be a long and harsh winter.

At one point earlier this month, hospitals were more full than they had ever been during the pandemic.

But the latest CDC update shows that cases are going down, and continue to as both the flu and RSV burn out.

The 33,041 flu cases is the lowest weekly infection figure since the week ending on November 19.

It represents a 27 percent drop from the flu outbreak’s peak of 45,792 cases during the week ending December 3.

These figures are massive underestimates because many cases go undetected as Americans weather symptoms of the virus at home.

Case positivity for the flu has remained consistent, though, with 24 percent of swabs detecting the virus. This is only a small decline from 25 percent a week earlier.

The flu does not present danger to a majority of Americans, but it can often strike down the elderly, young children and the immunocompromised.

The number of states dealing with severe flu transmission is dropping as well.

In the most recent CDC update, 22 states were recording ‘very high’ flu activity – down from 25 the week prior.

Six states are recording the highest levels of transmission, down from eight last week.

It was not the only annual virus that ramped up again this fall, only to now be on the decline after a late-fall peak.

Test positivity rate is also dwindling, with 6.5 percent of swabs coming back showing the infection. 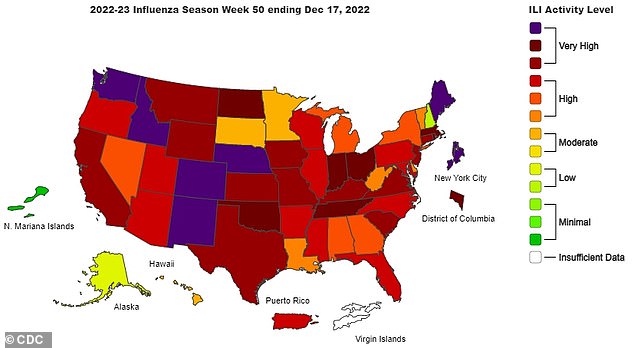 According to the CDC, 22 states are suffering ‘very high’ flu activity, down from 25 last week. Only six states are recording the highest levels of flu transmission

The virus does not pose much danger to adults, but can cause severe illness or even death in young children and elderly adults.

Officials have assured the public in recent weeks that RSV was starting to decline. Earlier this week, though, the CDC warned the light at the end of the tunnel could be further than it appears.

A CDC spokesperson told Fox 5 DC: ‘We anticipate that high levels of respiratory virus activity may continue for several more weeks, or possibly even months.’

Infant’s Tylenol is being sold online at 30 times the original price as predatory sellers cash in on the ‘tripledemic’ engulfing the United States.

Online pharmacies are charging up to $237 for a single 160mg box Infant’s Tylenol, which usually cost just $8.

A massive outbreak of flu, RSV and Covid, and other respiratory bugs among children has caused nationwide shortages of pediatric medication, including Tamiflu, Tylenol and the antibiotic amoxicillin.

Major pharmacy chains like CVS and Walgreens have been forced to ration stock to deal with the crisis that has rumbled on for months.

Yesterday, the Department of Health and Human Services (HHS) is releasing Tamiflu – a flu drug used in hospitals – from the nation’s national emergency stockpile. Opening this stockpile is rare, and only used in emergency situations.

The same medications is available for $8.79 from pharmacies like Walgreens.

Children have been struck hardest by these viruses so far, and it has gotten so bad that some parents are having trouble finding basic over-the-counter medicine for them.

Earlier this week, CVS said it would limit in-store and online purchases of children’s fever and pain medication – which includes Tylenol, Advil and Motrin – to two boxes each.

Walgreens has limited online purchases of the drugs to six purchases at a time, while no limit exists in-person.

Both CVS and Walgreens are out-of-stock of Children’s Tylenol online. Several New York City pharmacies checked by DailyMail.com did not have the medicine available for in-store pick-up either.

Anecdotal reports have also swirled on social media of parents around the country having trouble getting the drugs for their children.

Some hospitals are feeling this shortage too. Tamiflu, the primary drug used by hospitals to treat the flu, has been hard to find in some areas of the country.

While the Food and Drug Administration does not officially consider the drug a nationwide shortage, regional scarcities have forced the HHS to step in.

The US’ leading health agency announced Wednesday that it would make the additional supply of Tamiflu available to hospitals from the nation’s national stockpile.

This stockpile is a collection of drugs stored by the government in case of a national emergency.

‘Today we are taking action so that every jurisdiction can meet the increased demand for Tamiflu this flu season,’ Dr Xavier Becerra, secretary of the HHS, said in a statement.

‘State stockpiles can be utilized, and if jurisdictions need access to the Strategic National Stockpile, they now have it to respond to the current seasonal flu outbreak.’

While the other viruses falter, Covid takes it place. National case figures have increased five percent over the past two weeks to 70,435 per day.

Deaths are not keeping up, though, falling eight percent to 422 over that same period.

Case figures are also a significant drop from where they were around Christmas last year – as the country was logging 200,000 daily infections amid the initial Omicron outbreak.