The Russian invasion of Ukraine that began on Feb. 24 continues, with casualties rising on both sides.

Ukraine has managed to withstand the Russian onslaught with the help of Western military aid, but President Volodymyr Zelenskyy regularly calls on the world to do more. For all our coverage, visit our Ukraine war page.

Vietnam steps away from Russia reliance with first defense expo

Germany struggles to get China parts to replenish ammo stockpile

Ian Bremmer: The risk that Russia will go nuclear in Ukraine is real

Note: Nikkei Asia decided on March 5 to suspend its reporting from Russia until further information becomes available regarding the scope of the revised criminal code. Entries include material from wire services and other sources.

Here are the latest developments:

7:15 a.m. Russia is trying to obtain “hundreds of ballistic missiles” and more from Iran and offering “an unprecedented level of military and technical support” in return, says Barbara Woodward, the British ambassador to the United Nations.

The U.K. is also “almost certain that Russia is seeking to source weaponry from North Korea, other heavily sanctioned states, as their own stocks palpably dwindle,” she tells reporters.

Russia’s U.N. ambassador, Vassily Nebenzia, dismisses the accusations, telling the Security Council that his country’s military-industrial complex in Russia does not need outside help, unlike Ukraine’s being propped up by the West.

Iran acknowledged in November that it had supplied Russia with drones but said they were sent before the war. Russia has denied that its forces used Iranian drones to attack Ukraine.

4:15 a.m. The U.S. claims Russia is giving Iran “an unprecedented level” of technical and military support. “Russia is seeking to collaborate with Iran on areas like weapons development and training,” National Security Council spokesperson John Kirby says, citing U.S. intelligence. “We are concerned that Russia intends to provide Iran with advanced military components.”

3:00 a.m. President Vladimir Putin shrugs off the impact of an oil price cap on Russia’s energy industry, warning it will backfire on those who impose it.

The $60-a-barrel ceiling agreed upon by Group of Seven nations for seaborne Russian oil is close to where his country’s output is trading, Putin says, adding that Russia also provides discounts for buyers.

“Therefore, we will not have losses under any circumstances,” he tells a news conference on a visit to Kyrgyzstan. He says Russia will consider cuts to oil production but has not made any decision.

Putin says the “stupid” cap threatens all oil producers by undermining market principles in an industry that already suffers from underinvestment.

“All this will lead at some stage to a catastrophic surge in prices and to the collapse of world energy,” he says.

12:40 a.m. France’s TotalEnergies has decided to withdraw its two directors from the board of Russian gas company Novatek, in which it holds at 19.4% stake.

The two directors have had to abstain from board decisions since the start of Russia’s invasion of Ukraine, TotalEnergies says in its news release. “They are therefore no longer in a position to fully carry out their duties on the board, which might become an issue for the governance of this company,” the French energy group says. Its decision takes immediate effect.

TotalEnergies is unable to sell its stake in Novatek because of “prevailing shareholders’ agreements.” The French company says it will no longer book earnings from its investment in the Russian gas producer.

6:10 p.m. Canada has imposed fresh sanctions on Russia, Iran and Myanmar, citing alleged human rights violations by the countries’ governments. The measures include sanctions against 33 current or former senior Russian officials and six entities involved in alleged “systematic human rights violations” against Russian citizens who protested against Russia’s invasion of Ukraine, the Canadian foreign ministry said in a statement. Sanctions were also imposed on 22 individuals in Iran and 12 individuals and three entities in Myanmar, Canada said. Ukrainian servicemen fire a self-propelled howitzer toward Russian positions, on the frontline in Ukraine’s Donetsk region on Nov. 30.

10:00 a.m. The U.S. is sending an additional $275 million in military aid to Ukraine, including large amounts of ammunition and high-tech systems that can be used to detect and counter drones in its ongoing war with Russia, according to U.S. officials. The latest package of aid includes 80,000 rounds of ammunition for howitzers and an undisclosed amount of ammunition for the High Mobility Artillery Rocket System, known as HIMARS. It also includes systems to counter drones and air defenses, along with more Humvees, generators and other combat equipment.

6:00 a.m. The CEO of Chevron has raised questions about how the price cap on seaborne Russian oil imported to Europe will work in practice and whether it will simply encourage profiteering.

“It’s very difficult to tame a complex global market with an administrative mechanism that comes from a few countries,” Mike Wirth says in an interview as part of the Financial Times Global Boardroom conference. “It’s not exactly clear how the enforcement will work.”

“The reality is in these markets, historically, sanctions regimes have created opportunities for those that work around the edges of the system to actually benefit greatly — and oftentimes, the desired geopolitical objectives aren’t necessarily achieved,” Wirth says.

Griner had been serving a prison sentence on drugs charges.

2:30 p.m. China is paying the deepest discounts in months for Russian ESPO crude oil amid weak demand and poor refining margins, even though the effective prices refiners pay could exceed a price cap imposed this week by Western countries. The $60 per-barrel cap — set by G-7 nations, the European Union and Australia — took effect on Monday to limit Moscow’s power to finance its war in Ukraine, though Russia has vowed to defy it. China, Russia’s top oil buyer, has not agreed to the price cap. Traders said they were doing business as usual. At least one December-arrival ESPO shipment was sold last week to an independent refiner at a discount of $6 per barrel against the February ICE Brent price on a delivery-ex-ship basis, according to four traders with knowledge of the deal.

5:00 a.m. The European Commission on Wednesday proposed a ninth package of sanctions on Russia, including adding almost 200 additional individuals and entities to the list. European Commission President Ursula von der Leyen said in a statement that the EU also proposes sanctions against three additional Russian banks and wants to impose new export controls and restrictions, particularly for dual-use goods including key chemicals, nerve agents, electronics and IT components. 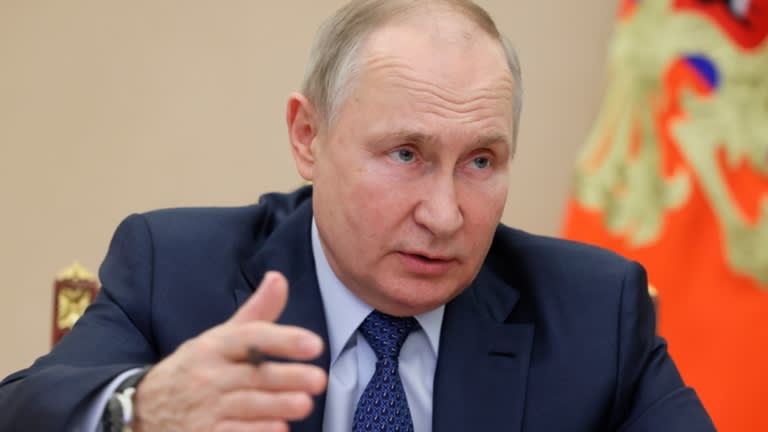 We fully understand what nuclear weapons are,” Putin said on Dec. 7. “We aren’t going to brandish those weapons like a razor running around the world.” (Sputnik, Kremlin pool photo via AP)

3:00 a.m. Russian President Vladimir Putin says the risk of nuclear war is rising but his country’s arsenal is a means of defense.

Russia has the world’s most advanced nuclear weapons, but “we haven’t gone mad,” Putin tells a televised meeting of his presidential human rights council.

Putin says fighting in Ukraine — which Moscow calls a “special military operation,” not a war — could be a long process.

The Russian leader sees no reason now for a second mobilization of troops after the call-up of 300,000 reservists in September and October.

Zelenskyy, a former comedian, refused to leave the capital at the beginning of the war and has traveled across the nation, including to combat zones. (Artwork by Neil Jamieson, Photograph by Maxim Dondyuk for Time)

“Zelenskyy’s success as a wartime leader has relied on the fact that courage is contagious. It spread through Ukraine’s political leadership in the first days of the invasion, as everyone realized the president had stuck around,” Time writes in acknowledging the 44-year-old leader.

7:00 a.m. The U.S. has “neither encouraged nor enabled Ukrainians to strike inside of Russia,” U.S. Secretary of State Antony Blinken says at a news conference.

“The important thing is to understand what Ukrainians are living through every day with the ongoing Russian aggression against their country, and our determination to make sure they have in their hands, along with many other partners around the world, the equipment that they need to defend themselves and their territory,” Blinken tells reporters.