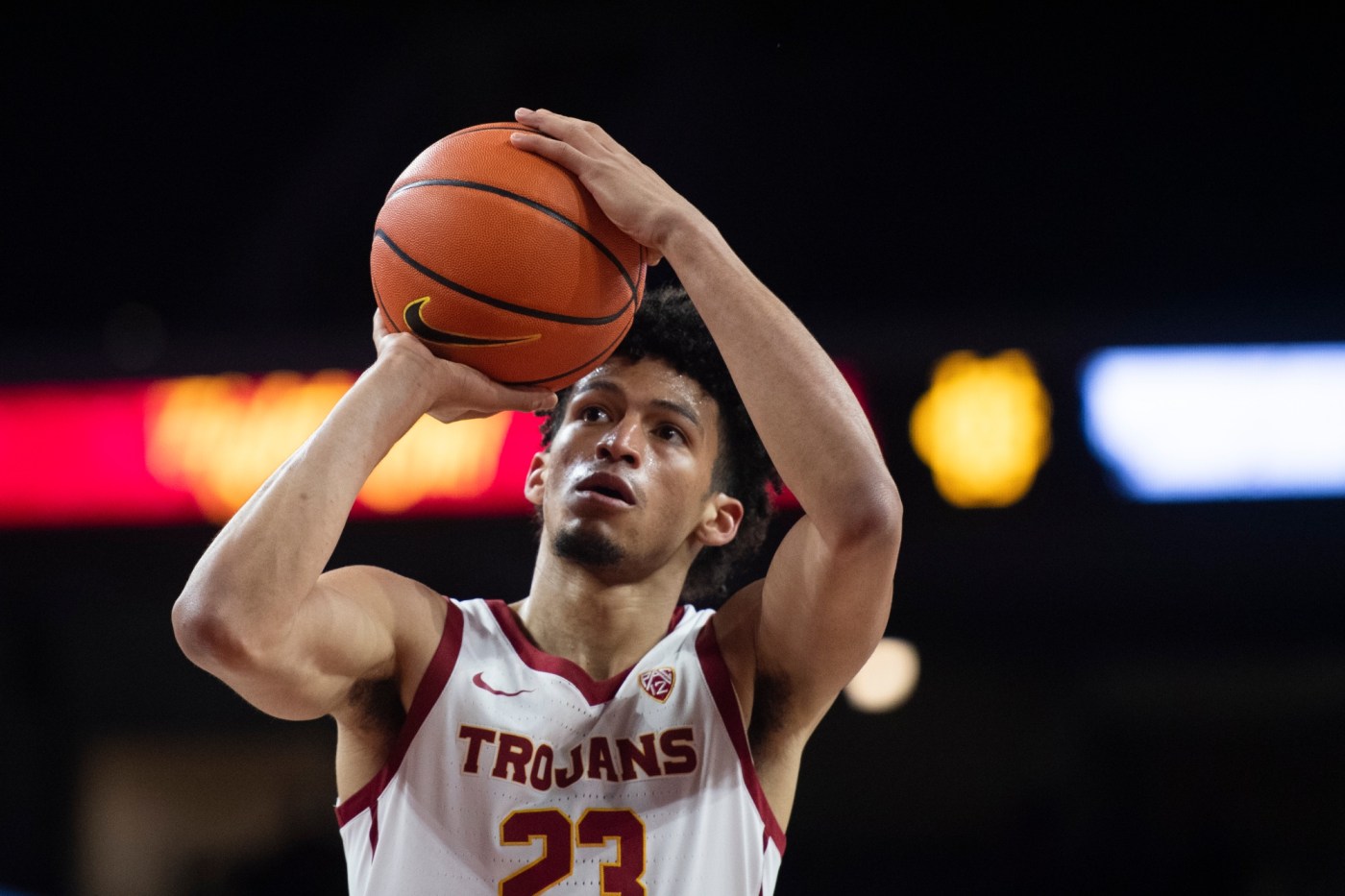 LOS ANGELES — Any joy or relief from the return to the norm, the return to the Galen Center practice court after weeks of quarantine, was quickly overshadowed by a bit of reality for the USC men’s basketball team.

A locker room-wide COVID-19 outbreak had limited most players to their apartments for 10 days. And the Trojans’ conditioning and timing were not where you’d expect them to be midseason.

“That was rough,” head coach Andy Enfield said. “Trying to make shots when they were winded just wasn’t happening.”

“I got through it,” guard Max Agbonkpolo added.

But after a nearly three-week gap in between games, the seventh-ranked Trojans will be back on the court on Thursday at Cal to try to extend their 12-0 start to the season.

Agbonkpolo was Patient 0 for USC, a fact his teammates have teased him about. He received the call with the positive test result the morning before USC flew to Phoenix to play Georgia Tech.

“I woke up to the phone call,” Agbonkpolo said. “I was in complete silence when the doctor told me. I was like, ‘This is a dream.’ I thought I was still sleeping.”

So he was confined to his bedroom in his apartment as USC beat Georgia Tech. But soon more positives popped up for the Trojans. The team shut down, and Agbonkpolo was joined in quarantine by roommates Isaiah Mobley and Ethan Anderson.

The trio resorted to board games to pass the time, and texting teammates in a group chat. They also had a jump rope and some weights in the apartment to help maintain some level of conditioning.

“To be honest though, surprisingly, I feel almost better than I was prior,” said Mobley, a self-described “COVID veteran” after testing positive over the summer at the NBA combine. “I’ve been trying to clean up my diet. I lost a little bit of weight just from having COVID and just working and focusing more.”

While Agbonkpolo was released from quarantine in time to spend Christmas with his family, not every Trojan was so lucky.

Mobley and Anderson ordered hot chocolates on DoorDash while also getting present deliveries from their parents. Anderson’s family brought macaroni and cheese and chicken for their dinner, and Mobley took his family Christmas picture via FaceTime.

But USC was able to return to practice on New Year’s Day. After that rough first day, there was a little improvement on Sunday. After an off-day Monday, the Trojans put together what Mobley considered one of the best practices of the year.

“The coaches did a great job getting us back in shape,” Agbonkpolo said. “We had weights every day, they were running us every day, really made sure we’d be ready for this.”

But, as Enfield points out, adjusting to practice is different than adjusting to a game. And it will have been 19 days since USC played an opponent when the Trojans face a Cal team Thursday that is 9-5 this season but 9-1 at Haas Pavilion.

The Trojans started the season on a furious 12-game win streak. Now, the hope is USC didn’t lose that momentum during its dead period at the end of December.

“You always have a concern when you sit out almost three weeks,” Enfield said. “But I think our guys are experienced enough, we should be able to handle it.”