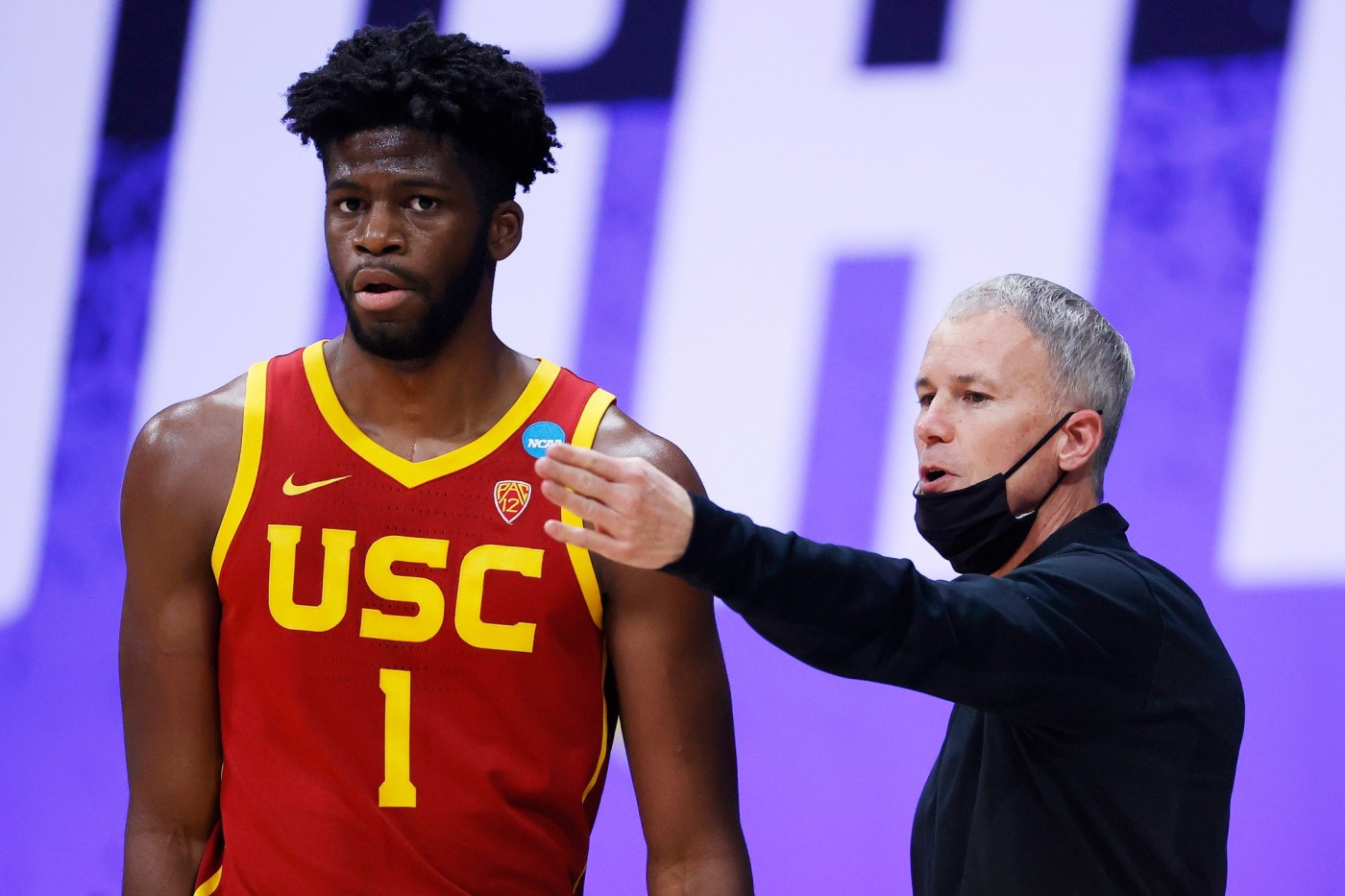 USC men’s basketball had mostly avoided complications from the COVID-19 pandemic the past two seasons. A solitary case caused a brief shutdown last season, but USC was able to play 27 regular-season games and then make it through an Elite Eight run in the NCAA Tournament without further interruption.

But when COVID struck the Trojans this month, it spread quickly. No. 7 USC has been on pause for nearly two weeks, bringing the Trojans’ 12-0 season to a screeching halt.

Speaking on the phone Wednesday, head coach Andy Enfield said virtually the entire roster, minus one or two players, tested positive for COVID-19, along with several staff members. The program has a 100% vaccination rate, though, and symptoms have either been mild or nonexistent.

Enfield added that he and several staff members who had received their booster shots all tested negative despite the locker room-wide breakthrough.

“We’re not sure if the booster made a difference or not; it could just be a coincidence,” Enfield said. “But we definitely think having the vaccination and the booster shot either prevented us from getting COVID or alleviated some of the severe symptoms.”

USC had been in the process of scheduling boosters for the rest of the program when the outbreak occurred. That will still be the case once players exit quarantine.

The timing of the pause did have some advantages. When it landed on the schedule, only three games were impacted. USC was disappointed to lose the nonconference game against Oklahoma State, but this week’s postponed games against Arizona and Arizona State will be made up.

And Enfield saw a silver lining to the majority of the team testing positive at the same time: Those that caught COVID-19 won’t have to test again for 90 days.

“Which will take us through March Madness,” Enfield noted. “The benefit of having an entire team have it at once is this will be our only pause due to COVID in our program.”

Enfield has been out on the road watching high school tournaments during his downtime. But he expects most of the roster to return to practice Saturday or Sunday, with every player available by Monday as USC begins to prepare for its road trip to play Cal on Thursday night and Stanford on Saturday night.

The first few days of practice will be a mini-training camp, of sorts. In addition to conditioning, Enfield noticed the team had lost track of some of its principles in its last couple of games before the pause, so this will be an opportunity to revisit.

While there have been benefits to USC from this whole situation, but Enfield knows it hasn’t been easy on his players, many of whom weren’t allowed to see family and friends during the holidays due to testing positive.

“It was rough from an isolation time because of the holidays and seeing their families,” Enfield said. “Everyone’s watching a lot of Netflix and Apple TV and a lot of series and movies that were probably on their to-do list and now was a good time to do it.”