‘We knew we have to be a bit anti-trend in our design philosophy’: Couturier Shantnu Mehra

Shantnu and Nikhil need no introduction to fashion enthusiasts. The designer duo, who specialises in bespoke womenswear, trousseau, menswear, bridalwear and accessories, is a name to reckon with. Their aesthetic remains unmatched, as they bring a unique blend of ‘structure meeting fierce glamour’ to their clothing.

Recently, the designers added another feather to their cap by launching a flagship store in New Delhi’s Mehrauli area. For the same, we caught up with Shantnu Mehra for a freewheeling chat, where the couturier shared fascinating insights into the ethos of their designs, the importance of innovation in fashion, sustainability, effects of the pandemic on business, and a lot more. Edited excerpts: 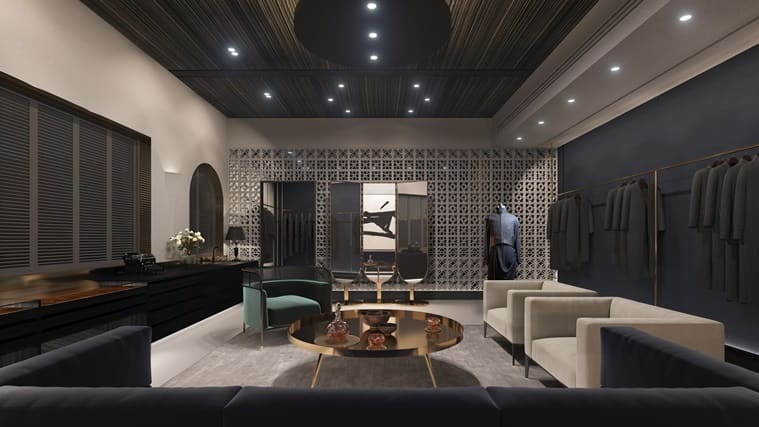 The interior of the Mehrauli store. (Source: PR handout)

Why did you decide on Mehrauli as the space for your new store?

When you look at the journey of Mehrauli, especially the Sumbawa complex, it has been almost like the Indian version of Rodeo Drive. You have some of the top luxurious brands, some of the best couturiers in the country retailing from here. It’s a natural choice for any designer to be a part of this ecosystem, which has been built over the years. For us, hence, being surrounded by the history of India, with the iconic Qutub Minar and the fleeting modernity that goes with the history that this space lends itself to, it was a natural choice.

You were the first design house in India to incorporate contemporary silhouettes in lehengas — a departure from the heavy, traditional embroidery, and continue with the tradition. Can you tell us about your design ethos?

That is our signature style statement. Right from the very beginning of our brand journey, we knew that we have to be a bit anti-trend in our design philosophy. When I say anti trend, we want to speak another story of India, a narrative that does not necessarily talk about textiles, heavy textiles or heavy heritage. All the embroideries, but, shapes, silhouettes, details, decadent tones, the decadent colour palette, which sits on brown skin beautifully. Right from the very outset, we tried to break the stereotypical notions attached to Indian fashion. And, I think we could do that very early on in our career, because we were only a handful of design artists and talents. We’ve tried to create a very hybrid approach to Indian fashion which has all the ingredients of Indo-western and ethnic influences coming and being a part of our design DNA. And for us, drapes have always been the pillar around which everything else pretty much revolves: structure meeting fierce glamour.

All of these factors gave us an opportunity to look at certain traditional silhouettes with a bit more playfulness. A lehenga need not necessarily have the cholis that it is known to have but can be worn as a voluminous skirt with a drape with a blouse, that need not necessarily have the burden of the dupatta. All of this was done keeping in mind the young, urban Indian that sits in front of us. The younger lot of these fearless, confident brides and grooms who are decision makers and thought-leaders. I feel that’s the market that we’ve been working towards for so many years and I feel the market is now where we wanted it to be. Now, the modern bride and the groom don’t want to be overburdened by the tradition of it. But yet at the same time, they want to keep the nuances of Indian heritage alive but with a lightness in form. That’s where silhouettes, minimalism, even in ceremonial wear, becomes that much more interesting. How has your brand responded to the sustainability movement, now a big part of the industry?

Sustainability has different connotations to different people and different brands react to sustainability in their own distinct way. When I look at it from my lens, and when I speak as a couturier, and for other couturiers, I think we’ve always had sustainability going for us. We are a bespoke brand, so for us, everything is made-to-measure, everything is very confidential in its approach, which means that we are not fast fashion and can never be fast fashion. You invest in a particular season with many styles and silhouettes, and then you take orders on them and then the next season. You’re actually doing two big seasons!

This is unlike fast fashion, where you are basically doing six collections in a year. I think by default, couturiers across the world and most of who are in India, we’ve always been sustainable from that aspect.

What have been your primary design influences?

I think we’ve always had this approach of heritage meeting spunk. Of course, our heritage comes from certain decadent architectural values. Across the world, when you look at the architectural value, there are certain geometric shapes, influences that we bring from our design philosophy. I feel that works. We are not very Mughal inspired architecture, but more Art-Deco, playing with geometrical shapes. If you carefully observe Mughal architecture, you will find certain nuances that are very geometrical in form and I feel, we present that.

There’s always been that undercurrent of heritage within spunk. Then spunk came in with silhouettes, shapes and drapes and I think we’ve always been experimenting on that. We were actually also the first ones in 2013-14, to introduce the hybrid form of a sari through a sari-gown concept. Instead of doing lehengas, we started off in 2009, by doing a version of gowns. Gowns which are voluminous, taking inspiration from the volume of a lehenga, cholis, and how a lehenga can become a gown for us. We gave volume gowns, a way for lehengas! We tried to be as experimental as we could, and then gowns suddenly became this new rage, from 2010 to 2015. In fact, even now, when you look at it, gowns have really replaced one or two traditional silhouettes and it’s become a mainstay for functions in India. If we look at the Indian celebration, we’re looking at four to five functions in a slew. The gown has become a staple for at least one, if not two functions.

It is a bit of fearlessness, it’s a bit of keeping the Indian heritage alive, but also making it a little more flirty and playful, without ignoring the market and still being relevant in the ceremonial side of the business. I think we pretty much set the veil tone when we introduced drapes for men in 2015 or 2016. So that’s when we changed the game and we brought in a bit of innovation in menswear, which was in a traditional Nehru collar ecosystem. So, we thought about how we could bring in a bit of a feminine touch to a very masculine shape. I feel that that also brought in a bit of gender fluidity in our DNA brand philosophy and our men became a bit feminine in terms of how we layered it, which was beautifully accepted. Our drapes have started to be copied everywhere else which also drives home the point that when you innovate with us with a keen sense of market in it, then keen sense of commercialization in it, then the world follows. I feel that because of that we were able to then add a little bit more masculinity to our womenswear, a bit of patriotic chic flavor came in, a bit of military influences came in. I feel that today we are in a good space where there are feminine and masculine energies overlapping between both men and women. I think that’s something that has kept us going as far as innovation is concerned. You mentioned your clothes being gender fluid in nature. Can you elaborate?

With our new brand S&N, if you ever look at that collection, you will always find a woman to be very powerful, a woman to be almost working shoulder to shoulder with a man and both of them are wearing decadent tones in a similar color palette. There is similarity in the way we bring in that heritage in both forms. That path of being gender fluid, has already started about four years ago. In fact, it is going beautifully into our couture side of the business as well. When you see our womenswear and menswear sitting together, there is a language that both of them are speaking. There is that bit of strength that is going into our menswear, and then you’ll see a similar resonance of softness going on. You are seeing that overlapping energy in your product and will continue to, in our journey going forward too.

Has the pandemic affected the way you ideate and the entire process of creating your designs?

No, in fact, the pandemic as much as we say has been a spoilsport, I feel there was a deep cleansing required in the system. Innovation was a big miss–there was so much commercialization of fashion before COVID that we had forgotten that there is something called uniqueness or innovation. I feel that with COVID happening, that has come back in a big way.

There is much more value given to design now, to a process of how a design starts from a certain point and ends at a certain point. There is a big revisit into the classics and the timelessness of those classics, how they can be reinvented and brought with a bit of newness. I feel that the ‘less is more’ concept is now coming up again.

We’ve been a part of this innovation ecosystem since 2012. So for us, the pandemic wasn’t really too much of a challenge, because we were already disrupting ourselves as fashion innovators, always challenging ourselves to be a little bit ahead of the market. That’s how we started our career. So for us, COVID has basically reinforced the fact that whatever we were doing in the last five or six years was the right thing.

Read More »
PrevPreviousCEED, UCEED 2022 admit cards to be released tomorrow: Here’s how to download
NextCompanies ramp up production of rapid COVID tests but they are still hard to getNext