Welcome to Disneyland… in Bavaria: Rothenburg inspired Pinocchio and is the PERFECT Christmas town

Picture the perfect festive scene and it’s highly likely it would look something like this: cobbled streets, the gable roofs of timbered houses weighed down by thick blankets of snow and a towering Christmas tree in a market square festooned with hundreds of twinkling lights.

And this happens to be exactly what the German town of Rothenburg ob der Tauber really looks like at this time of year.

This pocket-sized city in Bavaria is the country’s best-preserved medieval walled town. Rows of half-timbered houses with red shingle roofs line the ancient streets, safely enclosed behind a thick stone wall and guarded by six gates and 42 imposing towers. You can walk along almost all of the upper city walls – a two-mile trail that rewards visitors with uninterrupted views over the old quarter and Tauber valley beyond.

The town’s name means ‘red fortress over the Tauber’.

Sleep within the old town walls and enjoy breakfast with valley views at the charming family-run Burg-Hotel.

Alternatively, a stone’s-throw from Gallows Tower is Hotel Rappen, a convivial and comfortable property dating back to 1603. B&B doubles cost from £70 a night (hotelrappen.de).

So enchanting is Rothenburg that it’s been a movie backdrop (among them the 1968 musical Chitty Chitty Bang Bang) and inspired numerous Disney classics – join the queue to take photos of Plonlein, a mustard-yellow house used as a model for Geppetto’s home in Pinocchio. 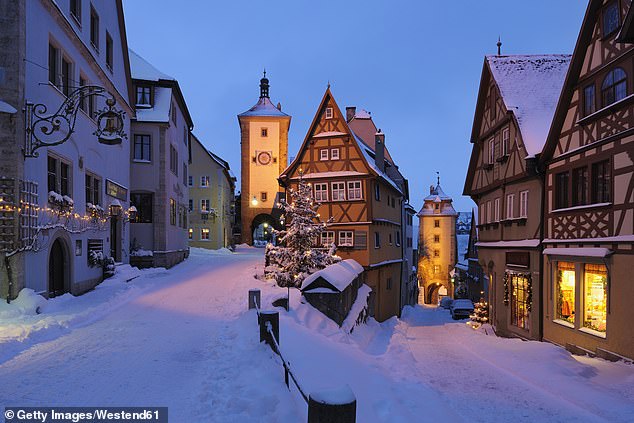 Above is Plonlein house in Rothenburg, which was used as a model for Geppetto’s home in Pinocchio 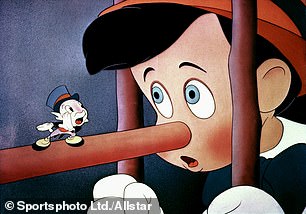 Despite its fairy-tale appearance, however, Rothenburg is a thriving community and has been since it was founded in 1274. Today, some 2,500 people reside within the old walled town, with many living and working in the age-old buildings just as they did hundreds of years ago.

Of course, trade in the 21st Century looks a little different. Shops now sell everything from tasty local sausages and sweets to ‘light houses’ – ceramic models of typical Bavarian houses designed to hold candles that are particularly popular at Christmas when Rothenburg really comes alive.

Because not only does this town look like the perfect place to celebrate Christmas, it’s where many of the yuletide traditions that we enjoy today originated.

The best place to get a feel for all things festive is at Kathe-Wohlfahrt, a family-owned company which is home to the world’s largest selection of German Christmas ornaments. The shop – you’ll recognise it by the cherry-red vintage car laden with presents parked outside – stocks some 20,000 beautifully crafted and painted decorations. 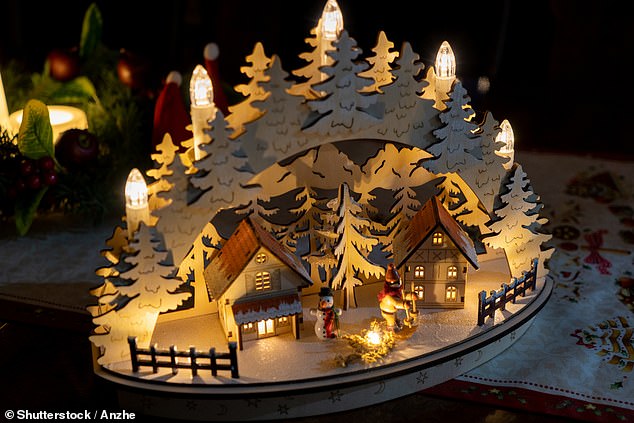 Decorative candle arches known as Schwibbogen, like the one pictured above, were used by miners as a symbol of hope during the long winter months, Katja reveals

Many of them come from the nearby Erzgebirge region, including the colourful wooden Nutcracker kings that have become synonymous with Christmas and the decorative candle arches known as Schwibbogen, which date from the late 18th Century and were used by miners as a symbol of hope during the long winter months.

Above the shop is a museum dedicated to the history of Christmas ornaments, starting with the earliest trees decorated with fruit, nuts and sugar canes through to present-day baubles.

Other fun displays include the story of the first Advent calendar, another regional creation, and the angel-like creature Christkindl who is responsible for delivering presents in Germany on Christmas Eve (no ruddy-cheeked Santa Claus jumping down the chimney here). 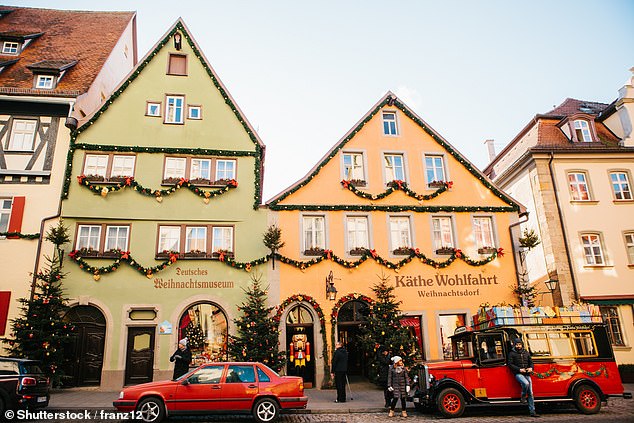 Katja visits Kathe-Wohlfahrt (pictured), a family-owned company that is home to the world’s largest selection of German Christmas ornaments

In Rothenburg, however, locals eschew the British tendency to mask the flavour of cheap red wine with spoonfuls of sugar and oodles of spices, and use Franconian white wine instead.

The best place to try a piping-hot glass is at the stall run by the jocular Albert Thurauf, whose family have been producing wine for four generations. They also own a bar on the main square, as well as Glocke, a hotel and restaurant serving rich Bavarian fare. In the basement is a candlelit, barrel-lined cellar where Herr Thurauf hosts wine-tasting evenings. 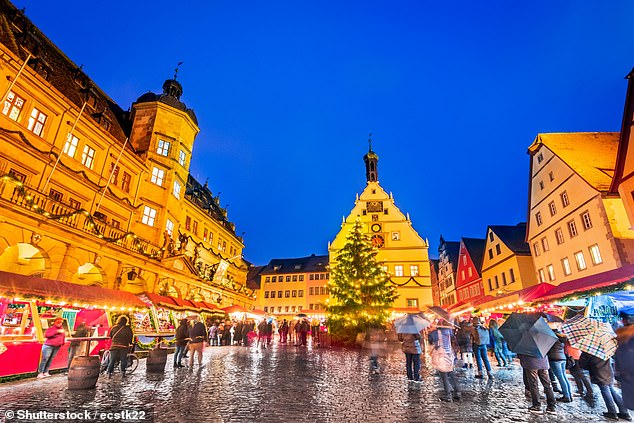 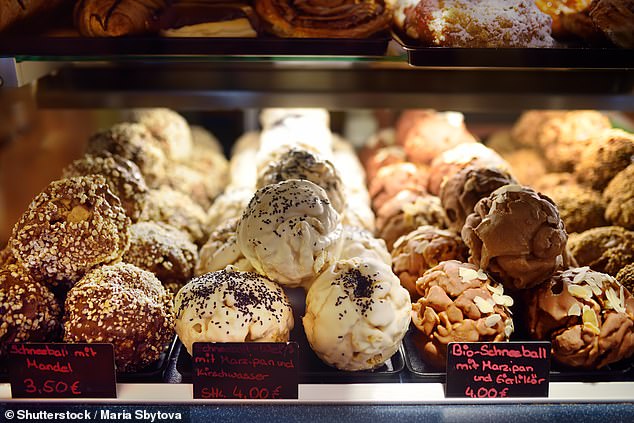 Katja Gaskell was a guest of the German National Tourist Board (germany.travel/en) and stayed at Hotel Rappen. Lufthansa flights from Stansted to Nuremberg from £126 return (lufthansa.com). The train fare from Nuremberg to Rothenburg is €18.

Bavaria might be best known for its beer, but the Franconia region, where Rothenburg is located, has been cultivating vineyards for more than 1,300 years and produces some outstanding wines.

One Christmas tradition that has been celebrated in Rothenburg for centuries but hasn’t quite caught on in the rest of the world is the local sweet snack of snowballs.

Dozens of these large, round, crispy pastries covered in generous dustings of powdered sugar can be seen piled precariously high in bakery windows around town. Originally reserved for special occasions, snowballs are now available year-round.

Try the best at Bakery Friedel, a family business and one of the oldest bakeries in town that has been creating snowballs since 1882. During the festive season they pump out an astonishing 3,000 a day.

Come to Rothenburg in the New Year and while the Christmas market will have closed, many of the other festive traditions remain. This really is a town where you can eat, drink and be merry all year round.

Read More »
PrevPreviousCameron Green signs with Mumbai Indians for $3.15 million, Sam Curran lands at Punjab Kings
NextThe Pentagon, In A Tech War With China, Is On Track To Field Its First Electric Aircraft In 2023Next