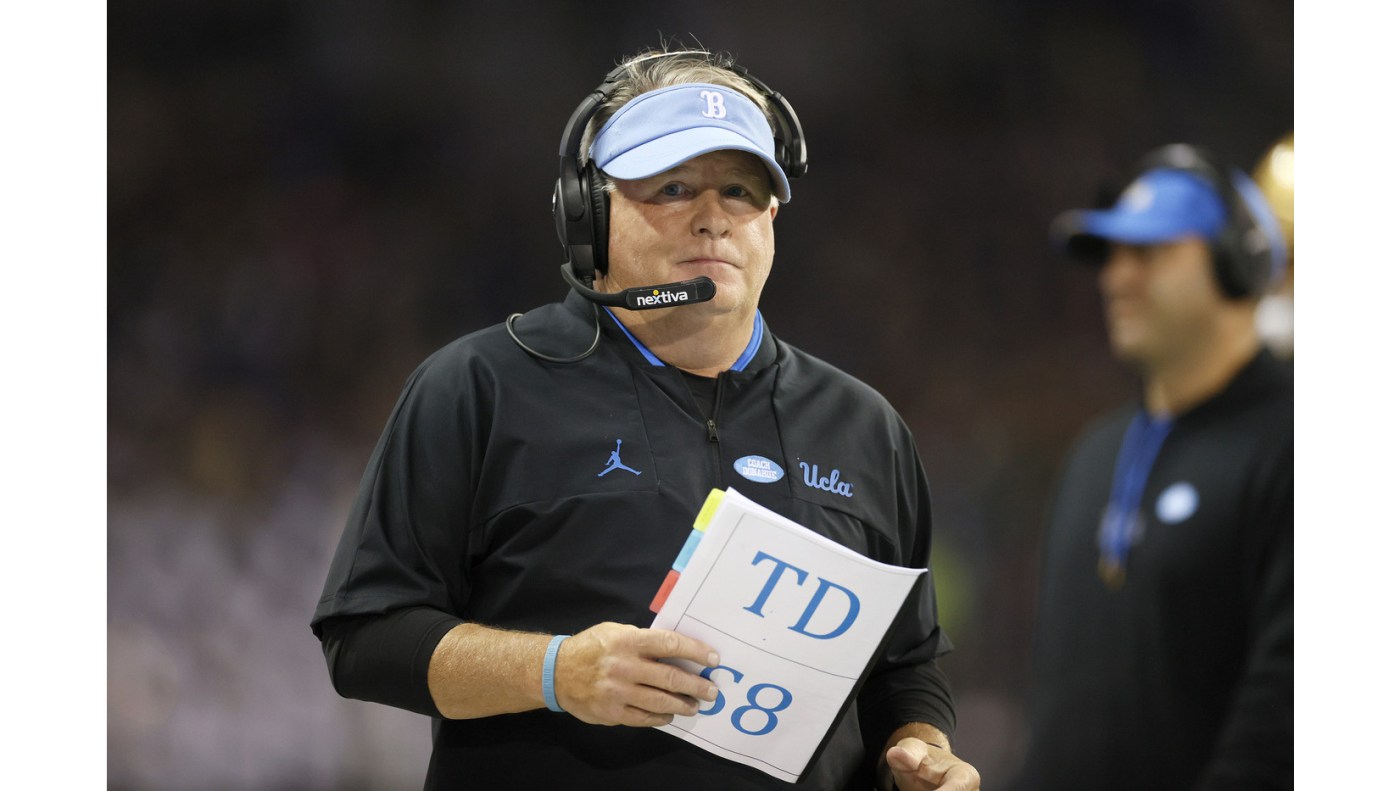 The UCLA football program went nearly two full seasons without having COVID-19 protocols eliminate a game from the schedule.

Coach Chip Kelly had taken great pride in the program’s success in protecting UCLA’s “ecosystem” but that success changed Tuesday afternoon when the Bruins had to bow out of the Holiday Bowl against No. 18 North Carolina State, just hours before kickoff.

While the postseason didn’t work out the way they wanted it to, the Bruins (8-4 overall) did produce their first winning season in four years.

Among the questions to be addressed this offseason will be whether UCLA athletic director Martin Jarmond decides to extend Kelly’s contract. Jarmond has continued to speak highly of Kelly as the director of the football program.

Kelly would begin the fifth year of his current contract with UCLA on Jan. 16, the date would also void the $9 million buyout for both sides.

The only thing set for 2022 is the upcoming schedule that begins with three nonconference games at home. It would be the first three of the eight home games on the schedule. The Bruins are scheduled to play three games out of state.

Attendance has also been a work in progress during Kelly’s tenure.

The 2019 season average attendance of 43,848 was the worst since 1982 when UCLA moved its home games to the Rose Bowl. Fans weren’t allowed in the Rose Bowl for the pandemic-shortened 2020 season but the year-long absence wasn’t enough to draw fans back for the season-opener this year.

In the first game for fans in 637 days, the Bruins had a crowd of 32,982 show up on a hot Saturday afternoon to watch the rout of Hawai’i.

The nationally televised nonconference game against LSU, played during the second week of the season, drew 68,123 fans to the Rose Bowl. The Bruins were ranked but the attendance momentum, before students were officially back in town for the start of the academic year, was not sustained as the Bruins stumbled against Fresno State.

The LSU game was just the second time UCLA has drawn a crowd of 60,000 or more with Kelly at the helm. The first came in 2018 against Fresno State.

Here’s a look at what else happened this year:

Not only did the Bruins produce their first winning season for Kelly, but they become bowl eligible for the first time since 2017. All but two starters returned from the 2020 pandemic season, so expectations were high.

Michigan transfer Zach Charbonnet was a great addition to the Bruins’ backfield, rushing for more than 1,000 yards while sharing the workload with senior Brittain Brown.

Players like Charbonnet and Brown, who transferred from Duke after 2019, have set an example for Kelly and the staff to reference when recruiting others out of the transfer portal going forward.

While an eight-win season can be viewed as a sign of improvement, the case could be made that UCLA couldn’t get the job done when it counted as the Bruins did not beat a team with a record above .500 this season.

The defense put an emphasis on blitzing and ranked among the best in terms of defending against the run, but struggled against the pass. This allowed for close games against teams that took advantage of explosive play opportunities through the air.

Defensive lineman Otito Ogbonnia has been the only Bruin to forgo his remaining eligibility and declare for the NFL draft. Ogbonnia started 25 of the 43 games he played in during his four-year career.

Redshirt senior Datona Jackson joined the Bruins in 2019 and started 17 of the last 19 games on the defensive line. He is one of eight players to have exhausted their eligibility and won’t be able to return.

Ethan Fernea was one of the longest-tenured players and was used at various skilled positions during his six seasons with the team.

The other six players who are leaving all joined the program over the past two seasons through the transfer portal. Brown, offensive lineman Paul Grattan and defensive back Qwuantrezz Knight have NFL aspirations.

Defensive backs Cam Johnson, Obi Eboh and linebacker Jordan Genmark-Heath are among the other notable starters not returning.

This season’s outside linebackers coach Jason Kaufusi and defensive line coach Johnny Nansen left the Bruins to join Jedd Fisch’s coaching staff in Arizona. Nansen was hired as the defensive coordinator. Kaufusi’s role was not specifically stated when the hire was announced.

Thompson-Robinson relied on Dulcich and Philips as go-to receiving options and as close friends off the field. The trio may decide to leave together, after coming in as members of Kelly’s first recruiting class in 2018.

Senior defensive linemen Martin Andrus Jr. and Tyler Manoa have announced their intention to stay for another year with the Bruins.

The defensive line was reportedly the position hit hardest by COVID-19 protocols, which led to the cancellation of the Holiday Bowl. With experienced players like Ogbonnia and Jackson leaving, keeping Andrus and Manoa will help soften the blow.

The position depth is fairly inexperienced as freshman Quintin Somerville and redshirt sophomore Sitiveni Havili-Kaufusi didn’t see the field after dealing with injuries. Other underclassmen have already entered the transfer portal to explore other opportunities.

The Bruins’ secondary may be the biggest position of need this offseason, but will benefit from having true freshman Devin Kirkwood and redshirt junior Kenny Churchwell III see the field and gain experience this year.

Who’s on the way?

The Bruins will welcome experience to the quarterback room after acquiring a commitment from Central Florida transfer Dillon Gabriel.

The junior had 8,037 passing yards, 70 touchdowns and 14 interceptions in three seasons at UCF. His commitment came less than a week after he was spotted making a visit to Westwood to watch practice.

If Thompson-Robinson doesn’t return, there will be a quality quarterback competition between Gabriel and Ethan Garbers for the starting role in 2022.

Duke transfer Jake Bobo also committed to the Bruins. The senior receiver had 794 yards and a touchdown catch in 12 games for the Blue Devils this season.

The Bruins have already filled both coaching vacancies, adding Chad Kauha’aha’a and Ikaika Malloe to the defensive coaching staff.

Malloe was hired as the outside linebackers coach. Kauha’aha’a’s role was not specified but may use his previous experience to coach the defensive linemen.

Both coaches have a level of familiarity with the Pac-12 footprint, having coached and recruited for other programs within the conference.