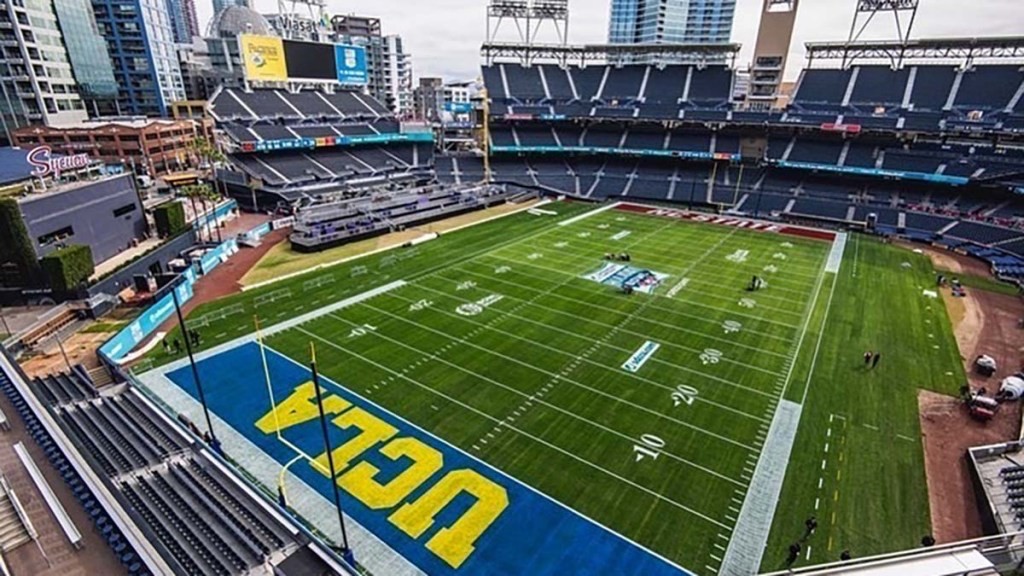 This might be apropos of nothing. Then again, maybe it’s fairly representative of College Football Nation.

Around 12:15 p.m. on Tuesday afternoon, a little less than five hours before UCLA and North Carolina State were scheduled to begin the Holiday Bowl at San Diego’s Petco Park, Bruce Feldman of Fox Sports and The Athletic tweeted that sources were telling him the game would be canceled, citing a COVID-19 outbreak among the Bruins’ defensive line.

SOURCES: Tonight’s Holiday Bowl between UCLA & NC State is getting canceled. The Bruins D-Line room has been decimated by Covid issues.

An hour and a half later, after the cancellation had been made official, that item had been retweeted nearly 2,500 times. And the vast majority of the comments at the top of that thread? Sum them up this way: “How does this affect me, be it my trip or my TV viewing or the team I root for?”

• “What i wanna know is why all the sudden these bowl games? What we had 1 or 2 games all season postponed? Answer: teams/players dont actually want to play.”

• “4 1/2 hours before the start of the game is a pile of poo! #UCLA should have to pay for #NCState Team, Band & Fans Transportation costs. You can bet there will be a lawsuit from someone. It will frivolous, but 4 1/2 hrs b/4 game? #HolidayBowl”

• “Abserd. Canceling mere hours before game time?!?!!?! Over a variant that’s no worse than a cold by all accounts???”

• “Next week the headline is: The whole team caught a cold. This week they’re ‘Decimated’ by Covid. It’s ok we can stop pretending now, it’s a cold.”

As for those who laid out money for tickets, hotel rooms and airfare, you can understand and sympathize with their gripe (and hope that they at least enjoyed a relaxing few days in San Diego). Those who were simply miffed over one less game to watch on TV? Not so much.

Whatever the complaint, they have company. Of the 44 postseason games scheduled, including the College Football Playoff semifinals and title game, 21 had been played as scheduled through Tuesday, including Tuesday’s Birmingham, First Responder, Liberty and Guaranteed Rate bowls. But five have been canceled: the Hawaii Bowl last Friday, the Military Bowl on Monday, the Fenway Bowl on Wednesday and the Arizona Bowl on Friday, in addition to the Holiday.

Two others, the Gator and Sun (both Friday), had to be reconfigured because one team pulled out due to an outbreak – and the game in Tucson was scrubbed because (a) Boise State pulled out, and (b) Central Michigan was diverted to the Sun Bowl and its higher payday when Miami, which was to be Washington State’s opponent, had to bow out.

No, omicron is not undefeated. But it’s been a powerful foe throughout college sports. Basketball teams have felt it to various degrees over the past few weeks. Now it’s football’s turn.

A year ago, 23 bowl games were played, including the playoffs. Was it overly ambitious to schedule 44 this time around? Probably, but when the 2021 bowl schedule was announced on Dec. 6, the omicron variant had just reached these shores. The sentiment (hope?) was that maybe the worst was behind us, but that was so much wishful thinking.

Yet in talking about cancellations and teams being unable to play, we haven’t even gotten into a couple of other factors peculiar to college sports: Opt-outs and the transfer portal.

Players now frequently pass on bowl games that have no bearing on the national championship. For example, four prominent Ohio State players have opted out of Saturday’s Rose Bowl, with two of them – wide receiver Garrett Wilson and left tackle Nicholas Petit-Frere, both juniors – announcing they’ll enter the NFL draft.

Can you imagine earlier generations of Ohio State players snubbing Ol’ Granddad? I can’t. But when a bowl game is a consolation prize, especially for a program accustomed to participating in the playoff, it’s no longer unthinkable. Consider it part of the athletes’ new independence. Like it or not, the balance of power is no longer 100 percent with coaches and administrators.

And in a number of this year’s cancellations, teams that withdrew were shorthanded by a combination of COVID infections plus players having fled to the transfer portal.

One prime example was Hawaii, which pulled out of the game against Memphis on its home field 24 hours before the Christmas Eve kickoff. COVID was certainly a factor, but a report by SFGate.com’s Marc Delucchi 2½ weeks before the scheduled bowl game indicated a significant number of Hawaii players were fed up with Coach Todd Graham. Since the start of November, 15 Hawaii players had entered the transfer portal, according to 24/7 Sports.

For what it’s worth, that same source reported UCLA had lost 10, though Chip Kelly had gained two for the 2022 season.

Could the Holiday Bowl have postponed Tuesday’s game rather than canceling? Perhaps, even with all of the moving parts involved. But who’s to say there wouldn’t have been even more players infected 10 days from now.

Who, in fact, is prepared to bet that of the 16 bowl games scheduled from Wednesday on, all will take place? Are you really ready to assume that this uber-contagious variant won’t create more mischief in college football over the next couple of weeks?

I wouldn’t take that bet.