WWDC 2021 highlights: Everything Apple announced during its developer conference

Apple kicked off its digital-only annual Worldwide Developer Conference on Monday where it unveiled new software for iPhone, Mac and Apple Watch. The tech giant showed off everything the company has been working on for many months, including iOS 15 which comes with revamped FaceTime and iMessage. WWDC is typically where Apple announces what’s new coming to the iPhone and iPad from the point of the software. All the software updates announced Monday will be available to developers immediately. For the general public, these updates will come later this year.

Here’s a quick summary of the biggest highlights from the two-hour keynote.

iOS 15, the latest version of the iPhone operating system, is official. The new iOS update includes a number of improvements including a much better FaceTime. Now, FaceTime includes Spatial Audio, portrait mode to blur backgrounds, and a grid view to speak to multiple people at the same time. Not just that, Apple has also added a new way that lets users send links to schedule individual FaceTime calls, similar to Zoom. Plus, users can also share their screen or music through a new feature called ShareTime. The big news is that FaceTime is now supported on Android and Windows through a web browser.

iMessage too is getting a redesign. The messaging platform, which is available only on Apple devices, includes features that turn images into galleries. A brand new feature called “shared with you” basically saves links that people sent you and puts them in one place. It works with Safari, Apple Music, Apple TV, and Apple Podcasts. iOS 15 is compatible with all the devices that run iOS 14.

iOS 15 also features redesigned notifications based on activities. Notifications now have a brand new design on the lock screen, featuring a clearer look. With the new Focus feature, instead of silencing calls and notifications through Do Not Disturb, users will be able to set different types of notification preferences based on their status — like whether you are driving, working, or sleeping.

As part of the iOS 15, the iPhone is getting camera improvements, which includes a new feature called Live Text that automatically identifies and scans text in photographs. Another feature called Memories uses machine learning and AI to combine photos into galleries and adds music from Apple Music. Apple is also expanding the Wallet app functionality which now includes corporate badges.

Moreover, Apple has also updated its Maps software with 3D data. It now includes turning lanes and more city details. Today’s announcements also include a new feature coming to AirPods called “conversation boost” which essentially helps people better understand who they are talking to in real-time. iPadOS 15 is getting improved multitasking capabilities.

Like iOS, iPadOS is getting a ton of new features. With the iPadOS 15, users can rearrange iPad apps by putting widgets on the screen and the App Library feature, announced for iOS last year, automatically organises apps.  Apple also introduced a new multitasking interface, making it easy to put two apps side by side on the iPad screen. The Notes app, meanwhile, has been updated with a better interface. A new feature called Quick Notes allows users to jot notes using the Apple Pencil. A new update to the Translation app has also been announced.

Apple is adding new privacy features to its devices. For instance, it is adding something called tracker-blockers in its Mail app which basically hides your IP address and location. The company is also adding the App Tracker Report section to settings, where users can see how often apps use info in the last seven days.

The tech has announced a new service called iCloud+. The idea behind the iCloud+, which includes additional features for online privacy. Perhaps the biggest feature as part of iCloud+ is Private Relay, which essentially routed web traffic through two separate servers, just like VPN. 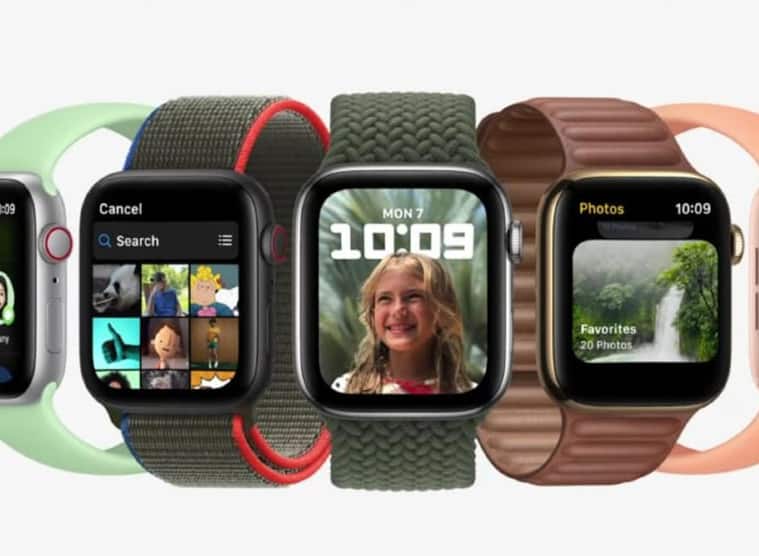 watchOS 8 is getting a bunch of new features.

Say hello to watchOS 8. The latest Apple Watch software not only includes new watch faces but several brand new features such as the ability to write text with their finger to send a text message using the Apple Watch. watchOS 8 also includes an updated Breathe app called Mindfulness. There’s also support for tracking your respiratory rate while you’re asleep. Meanwhile, in the Workouts app, new workout types have been added including martial arts and palates. A new Artist Spotlight series is being added, offering new workouts featuring Lady Gaga, Leith Urban, and more.

Apple is tightening its HomePod Mini with Apple TV. Later this year, users can ask HomePod Mini to play music or movie on Apple TV. “Hey Siri, play Schitt’s Creek” on Apple TV, for example. The big news is users will be able to use their HomePod Mini as stereo speakers when hooked into the Apple TV. This feature was previously limited to the original HomePod. A public beta of macOS Monterey will come in July.

At WWDC 2021, Apple announced a new version of macOS. It’s called Monterey, named after the beach town in California’s central coast. macOS Monterey brings a number of features including the ability to use the same mouse and keyboard across a Mac or an iPad. This feature is called Universal Control. Also, for the first time, iOS devices can beam their screen to a Mac, thanks to AirPlay. That’s not all. Apple’s Safari web browser has also got a redesign with new features including tab grouping and tab bookmarking. Apple also added new Shortcuts to the Mac interface.