Xiaomi has been awarded a new patent for an all-screen fingerprint sensor design. The new tech could mean Xiaomi phones in the future could have the entire screen detect fingerprints, eliminating the need to touch and hold on a single spot for accurate detection.

This could increase the fingerprint unlock success rate significantly as placing your finger anywhere across the display would be good enough for the phone to unlock itself.

Xiaomi’s patent reveals that the tech will work using an array of infrared LED transmitters and receivers that will be placed under the capacitive touch-screen layer, but above the AMOLED display panel. 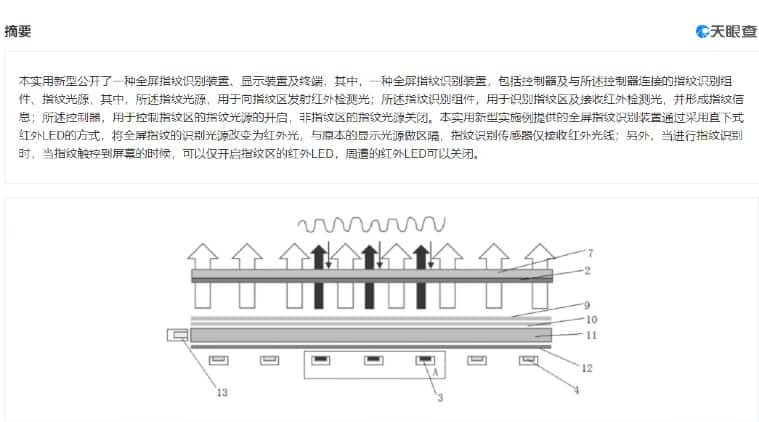 Check out the patent awarded to Xiaomi (Image Source: ITHome.com)

When a finger is placed on the screen, the capacitive touch screen will detect the interaction as well has how the finger is placed. The infrared LED transmitters in this particular area will then light up while the infrared light receivers will capture the fingerprint data and process it.

The surrounding infrared LEDs (which here refers to the rest of the display) will not light up, saving your power and your eyes. The processed fingerprint data will then be compared to your saved fingerprint data and the phone will determine whether or not to unlock the phone.

A report by GizmoChina notes that Huawei also submitted a patent of their own technology that uses the entire screen as a fingerprint scanner. This patent was submitted back in August 2020 in six markets, including China, Europe, the US, Japan, Korea, and India.

The technology has not been announced yet, but Xiaomi could be able to bring the technology to the commercial smartphone market.

Read More »
PrevPreviousWhen Deepika Padukone was described as Novak Djokovic’s ‘female companion’, said she must ‘work harder’ to be recognised
NextKeep yourself warm and safe in the cold wave; here are some pointersNext