Yearender 2021: How the pandemic paved way for experiential storytelling in fashion

With many fashion designers and brands having to pull the brakes on their production during the multiple lockdowns, many of the former processes, often written in stone, also underwent a complete overhaul. One of them is the physical fashion show, now substituted by elaborate fashion films and campaigns that go beyond just pretty locations and aesthetic styling.

Fashion designers are exploring a directorial approach in their campaigns, investing in bringing cinema-like aspects to turn fashion videos into fashion films with a story, characters, music and screenplay. Their inspiration? To swim against strict fashion calendars and former diktats of digital marketing to offer experiential storytelling through their campaigns. Not only has this widened and democratised the reach of fashion, it also marks a shift in the way these brands communicate to their digital audience. From péro ‘Locked in Love’ campaign.

For péro’s Aneeth Arora, the first lockdown in 2020 allowed her the time to edit the brand’s former pace, and double down on the storytelling inspired by the inherent handmade nature of Indian garment-making practices, says the designer. The campaign for her Spring-Summer collection, ‘Locked in Love’, was born out of Arora’s own discoveries of that which brought her happiness while being locked in at home, documenting the many things a lot of us love to do, but hardly found the time to.

“Locked in Love was the story of all such people, represented through nine characters, locked in their rooms, who discover the things they love doing, and find a way to share it, too.” The campaign portrays the characters, shot in sets created in the péro studio, baking, reading, stitching to repetitive music chosen to reflect the otherwise mundaneness of the lockdown days.

While Arora says she isn’t all for the digitisation of collection showcases and observes an urge to go back to completely physical shows when possible, she also believes that “earlier it was a set format at a fashion week, and you were given a space to work with. But with fashion films, it’s an expression of your own. You can say what you like, and choose to present it the way you like. So, I think the urge to tell more stories will become even stronger, people will find their individual voices and we will see more and more interesting storytelling in fashion.” Speaking about the reign of Instagram in showcasing collections through fashion films, Rajesh Pratap Singh, the creative director of Satya Paul, says, “Fortunately or unfortunately, Instagram is the most important medium right now. It’s democratic, yes, but it’s also clearly changed how we see communication. With the speed that Instagram works in, you are as good as your last post, so, whatever you do has to be relevant on it, too.”

Since his appointment at Satya Paul, Singh has revamped the digital presence of the brand through storytelling and visually captivating campaigns, something that the designer says is inspired by “the brand values and its DNA, things that Mr. Paul had conceived in the ‘80s — to be bold, contemporary, and to have a fresh point of view.”

Satya Paul’s campaign ‘Vivadelic’ is a dive into the psychedelic music that emerged during the ‘60s, a reimagination of it in contemporary times. Shot in the brand’s factory at night to imitate an ‘underground’ look, the models were grooving to music from the era as well as classical music that is manipulated to align with the campaign. Singh considers music as essential to exuding the intended energy of a campaign.

Speaking of the new format of presenting collections, Singh predicts, “Videos are more important than the shows as was the case in the past. That is something that the industry will evolve into more and more  — professional filmmaking in fashion communication. Experiential storytelling evolves the language of the brand in a futuristic and contemporary way.” 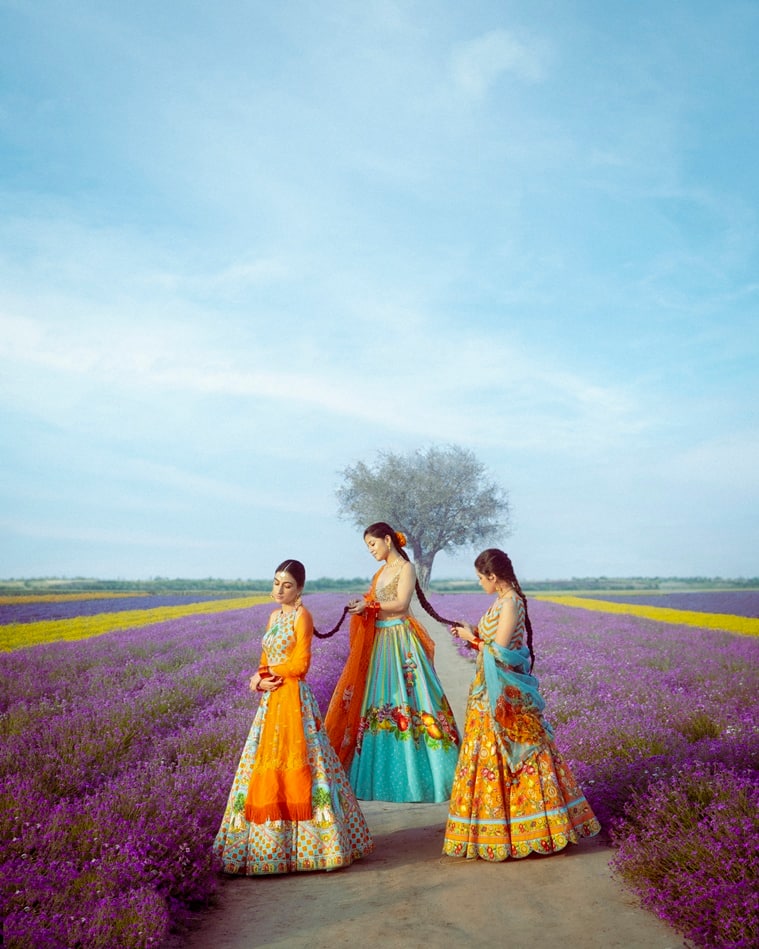 Instagram was where Torani was born three years ago when its first collection sold out in a week after Karan Torani uploaded the pictures of the shoot. Since then, the brand has made stories its magnum opus, fashion films being its primary medium of showcasing new collections. And the designer says he takes his responsibility as an entertainer no less seriously than his role as a designer:

“Luxury design and fashion is not just a mode of consumption, it’s more about aspiration. Even though pandemic has scrunched down the consumption of Indian clothing, we can’t run away from the responsibility of being entertainers. Designing is not enough for me, we need to give people experiences.”

The campaign for his collection, Jhooley, set in Punjab, is an excursion into the relationship between sisters, a process that the designer shares started with documenting real stories of people. The vision was brought to life, as a collection and a campaign, with bright colours and truck art motifs in the pieces, shot in the expansive flower fields of Punjab, as the cast swayed to the tunes of Punjabi music and Hindi poetry.

“I feel like a wannabe director,” shares Torani. “Our job as designers is to take people and consume them in a universe and make them feel and think something — good, bad, or the ugly.”

The thing about stories is that their reception is highly subjective. This year, while some stories soared, some fell to the harsh grip of trolls and flak. Sabyasachi’s Royal Bengal Mangalsutra campaign was visualised in line with the coming-of-age visual storytelling that the brand had adopted for its collaboration with global retail giant H&M. From the regality of the models strutting through grand havelis in lehengas and saris to the playfulness of Sabyasachi Mukherji himself posing in a pool for the campaign, (a first for the brand), it left the netizens divided. And so did his mangalsutra campaign.

It featured female models dressed in black lingerie and some male models shirtless, posing in intimate positions, something that was aimed  to “talk about inclusivity and empowerment. The campaign was intended as a celebration and we are deeply saddened that it has instead offended a section of our society,” said the brand in a statement before withdrawing the campaign.

On Diwali, when Fabindia, one of India’s oldest lifestyle and clothing brands, launched a campaign titled ‘Jashn-e-Riwaz’, a ‘celebration of traditions’, it met a Twitter storm of trolls and a trending hashtag – #BoycottFabindia.

It was defaced for ‘deliberate attempt of abrahamisation of Hindu festivals’, as per the BJP Yuva Morcha president Tejasvi Surya.

This deliberate attempt of abrahamisation of Hindu festivals, depicting models without traditional Hindu attires, must be called out.

And brands like @FabindiaNews must face economic costs for such deliberate misadventures. https://t.co/uCmEBpGqsc

Fabindia stated that the capsule collection was not their Diwali offering, launching another campaign ‘Jhilmil Si Diwali’ soon after withdrawing ‘Jashn-e-Riwaz’, which is a phrase in Urdu, a language born in India.

While much remains to be said, and done, about democratic storytelling when it comes to brands, any kind of brand, it is true that stories stay with us, even if collection launches don’t. In the era of recurrent lockdowns and imminent lurking gloom over new Covid variants, brands are shifting their marketing strategies towards offering experiences to the audience over pushing sales.

It’s like Arora puts it: “When my mum used to make me memorise the capital cities of Indian states, I remember she would sing it to me, and I remembered it. So, I feel that when you convey something to someone in a fun way, it stays with them.”